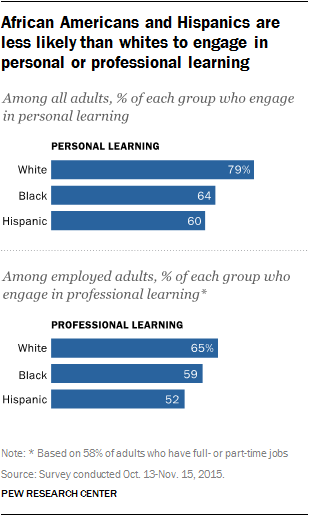 Nonetheless, for personal learning, the differences for both African Americans and Hispanics compared to whites are significant when taking into account levels of income and education. In other words, even African Americans and Hispanics with lower educational levels are less likely to engage in personal learning than whites with the same educational levels. These patterns are not evident for professional learning, where (when controlling for income and education) there are no significant difference in professional learning that can be traced to race and ethnicity. 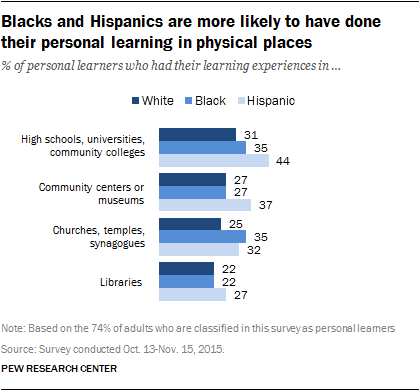 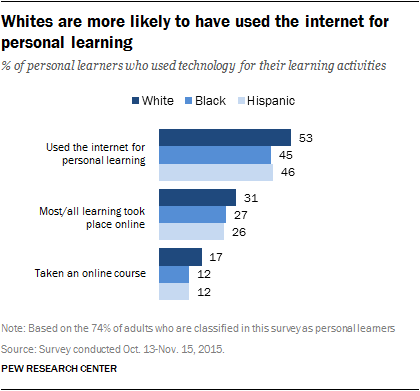 In addition to lower levels of personal learning for Hispanics and African Americans, there are differences in how they pursue it relative to white adults. In general, learners who are Hispanic or African American are a bit more likely than whites to rely on institutions such as community centers, places of worship or libraries. By contrast, they are generally less reliant on online courses or just using the internet for some part of their personal learning.

Next: Acknowledgments
← Prev Page
Page1Page2Page3Page4Page5Page6Page7Page8You are reading page9Page10Page11
Next Page →

Lifelong Learning and Technology 1. The joy – and urgency – of learning 2. Three-quarters of adults have done a personal learning activity in the past year 3. Almost two-thirds of employed adults pursue job-related learning 4. Those on the lower end of the socio-economic ladder are less likely to take advantage of lifelong learning opportunities 5. The internet plays less of a role in lifelong learning for those with lower levels of education and income 6. Adults with tech-access tools are more likely to be lifelong learners and rely on the internet to pursue knowledge 7. People’s attitudes about learning, the classroom and personal growth shape adult learning activities
8. In addition to socio-economic class, there are differences in adult learning with respect to race and ethnicity
Acknowledgments Methodology