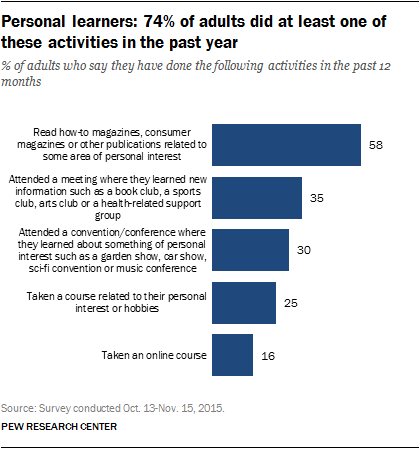 For the most part, adults are motivated to pursue this learning because they have extra time or a desire to make their lives more full. Among personal learners, 80% do this to make their lives more interesting or full and 60% do this because they have extra time on their hands. Additionally, 64% are motivated to pursue learning in order to help others more effectively. Another third (36%) say turning a hobby into something that generates income was a motive and a similar number (33%) say they engaged in such learning to keep up with the activities of their kids, grandchildren or others in their life. 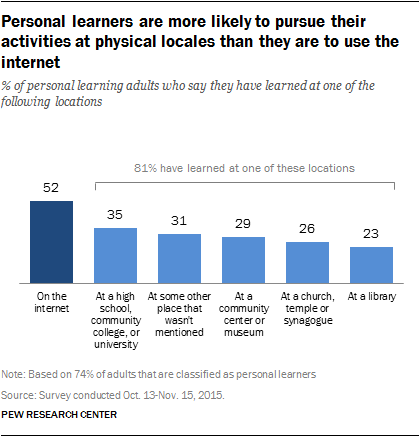 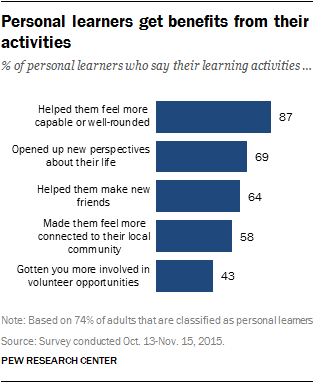 Wherever people learn or whatever their motivation, one thing is clear: Learners report positive impacts from their personal educational pursuits. Nearly nine-in-ten (87%) say their personal learning has helped them feel more capable, but strong majorities express satisfaction in other areas, too.

Lifelong Learning and Technology 1. The joy – and urgency – of learning
2. Three-quarters of adults have done a personal learning activity in the past year
3. Almost two-thirds of employed adults pursue job-related learning 4. Those on the lower end of the socio-economic ladder are less likely to take advantage of lifelong learning opportunities 5. The internet plays less of a role in lifelong learning for those with lower levels of education and income 6. Adults with tech-access tools are more likely to be lifelong learners and rely on the internet to pursue knowledge 7. People’s attitudes about learning, the classroom and personal growth shape adult learning activities 8. In addition to socio-economic class, there are differences in adult learning with respect to race and ethnicity Acknowledgments Methodology