Along with class-based differences in the overall incidence of pursuing learning, there are differences across class lines when it comes to where learning takes place and how adults view its impact.

For professional learning, these class differences also emerge. Among those who pursue learning for their jobs or careers, most of this occurs at the workplace regardless of an individual’s education or income. However, those on the lower end of the socio-economic ladder (who are less likely to have such learning opportunities in the first place) are much less likely to do this online, at a convention or at a conference. 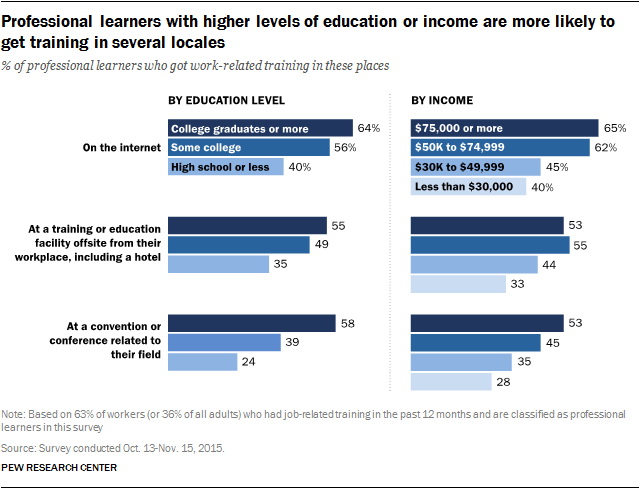 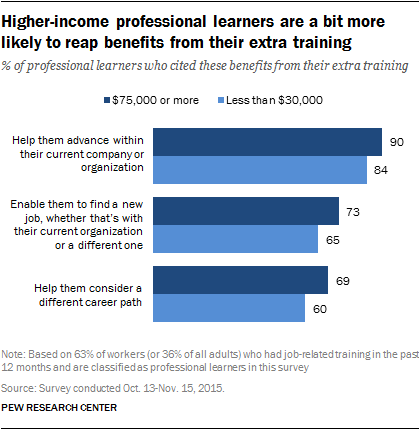 When it comes to the impact of different kinds of learning, the learners with higher education levels and higher household income levels are also more likely than others to report reaping gains from their activities.

There are also modest differences between better off and less-well-off professional learners when it comes to other advantages of job-related education activities, including advancing in their companies or finding new jobs. 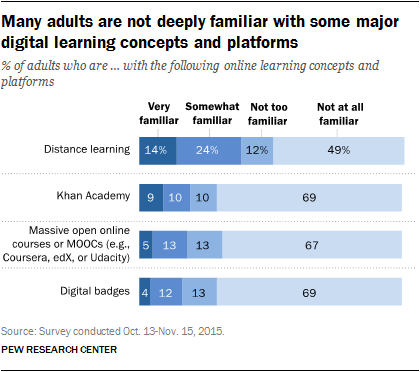 Even though the internet is a key part of the learning environment for personal and professional learners, some of the newer platforms that have captured wide media coverage and stirred commentary in education circles are not necessarily breaking into most of the public’s consciousness. In this survey, Pew Research Center asked about four key parts of online learning and found that professional and personal learners were more aware than others of the concepts, but that it was usually the case that most learners did not have deep familiarity:

Next: 6. Adults with tech-access tools are more likely to be lifelong learners and rely on the internet to pursue knowledge
← Prev Page
Page1Page2Page3Page4Page5You are reading page6Page7Page8Page9Page10Page11
Next Page →

Lifelong Learning and Technology 1. The joy – and urgency – of learning 2. Three-quarters of adults have done a personal learning activity in the past year 3. Almost two-thirds of employed adults pursue job-related learning 4. Those on the lower end of the socio-economic ladder are less likely to take advantage of lifelong learning opportunities
5. The internet plays less of a role in lifelong learning for those with lower levels of education and income
6. Adults with tech-access tools are more likely to be lifelong learners and rely on the internet to pursue knowledge 7. People’s attitudes about learning, the classroom and personal growth shape adult learning activities 8. In addition to socio-economic class, there are differences in adult learning with respect to race and ethnicity Acknowledgments Methodology