It has been nearly two years since the first disclosures of government surveillance programs by former National Security Agency contractor Edward Snowden and Americans are still coming to terms with how they feel about the programs and how to live in light of them. The documents leaked by Snowden revealed an array of activities in dozens of intelligence programs that collected data from large American technology companies, as well as the bulk collection of phone “metadata” from telecommunications companies that officials say are important to protecting national security. The metadata includes information about who phone users call, when they call, and for how long. The documents further detail the collection of Web traffic around the globe, and efforts to break the security of mobile phones and Web infrastructure.

A new survey by the Pew Research Center asked American adults what they think of the programs, the way they are run and monitored, and whether they have altered their communication habits and online activities since learning about the details of the surveillance. The notable findings in this survey fall into two broad categories: 1) the ways people have personally responded in light of their awareness of the government surveillance programs and 2) their views about the way the programs are run and the people who should be targeted by government surveillance.

Some people have changed their behaviors in response to surveillance

34% of those who are aware of the surveillance programs (30% of all adults) have taken at least one step to hide or shield their information from the government. For instance, 17% changed their privacy settings on social media; 15% use social media less often; 15% have avoided certain apps and 13% have uninstalled apps; 14% say they speak more in person instead of communicating online or on the phone; and 13% have avoided using certain terms in online communications.

Those most likely to have taken these steps include adults who have heard “a lot” about the surveillance programs and those who say they have become less confident in recent months that the programs are in the public interest. Younger adults under the age of 50 are more likely than those ages 50 and older to have changed at least one of these behaviors (40% vs. 27%). There are no notable differences by political partisanship when it comes to these behavior changes. 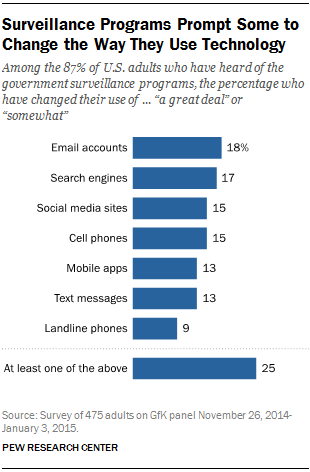 There are no partisan differences when it comes to those who have changed their use of various technologies.

Additionally, a notable share of Americans have taken specific technical steps to assert some control over their privacy and security, though most of them have done just simple things. For instance, 25% of those who are aware of the surveillance programs are using more complex passwords.

One potential reason some have not changed their behaviors is that 54% believe it would be “somewhat” or “very” difficult to find tools and strategies that would help them be more private online and in using their cell phones. Still, notable numbers of citizens say they have not adopted or even considered some of the more commonly available tools that can be used to make online communications and activities more private:

The public has divided sentiments about the surveillance programs

Moreover, there is a striking divide among citizens over whether the courts are doing a good job balancing the needs of law enforcement and intelligence agencies with citizens’ right to privacy: 48% say courts and judges are balancing those interests, while 49% say they are not. 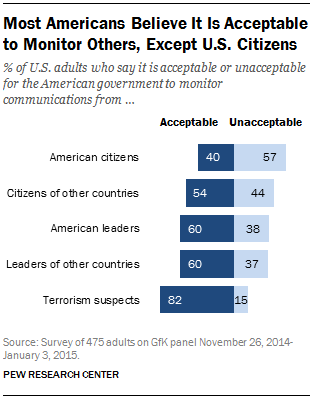 At the same time, the public generally believes it is acceptable for the government to monitor many others, including foreign citizens, foreign leaders, and American leaders:

Yet, 57% say it is unacceptable for the government to monitor the communications of U.S. citizens. At the same time, majorities support monitoring of those particular individuals who use words like “explosives” and “automatic weapons” in their search engine queries (65% say that) and those who visit anti-American websites (67% say that). 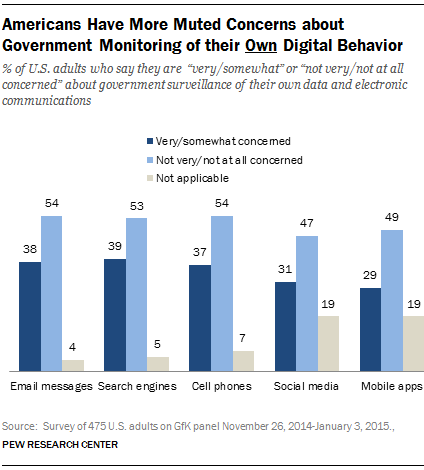 More about this survey

The analysis in this report is based on a Pew Research Center survey conducted between November 26, 2014 and January 3, 2015 among a sample of 475 adults, 18 years of age or older. The survey was conducted by the GfK Group using KnowledgePanel, its nationally representative online research panel. GfK selected a representative sample of 1,537 English-speaking panelists to invite to join the subpanel and take the first survey in the fall of 2014. Of the 935 panelists who responded to the invitation (60.8%), 607 agreed to join the subpanel and subsequently completed the first survey (64.9%) whose results were reported in November 2014. This group has agreed to take four online surveys about “current issues, some of which relate to technology” over the course of a year and possibly participate in one or more 45-60-minute online focus group chat sessions. For the third survey whose results are reported here, 475 of the original 607 panelists participated. A random subset of the subpanel receive occasional invitations to participate in online focus groups. For this report, a total of 59 panelists participated in one of six online focus groups conducted during December 2014 and January 2015. Sampling error for the total sample of 475 respondents is plus or minus 5.6 percentage points at the 95% level of confidence.