The 87% of respondents in this sample who say they had heard at least a little about the government’s surveillance programs were asked a series of questions about whether they had changed some of the ways they use technology. This section of the report covers their answers.

Some are altering their use of information and communication technologies 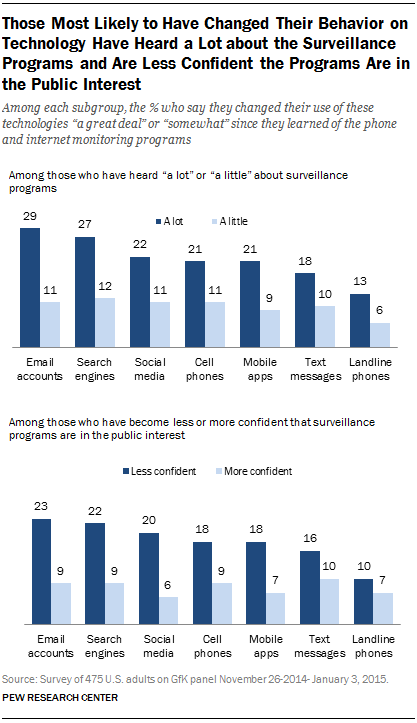 Those who are more likely to have changed their behaviors include the people who have heard “a lot” about government surveillance (38% say they have changed a great deal/somewhat in at least one of these activities), those who are at least somewhat concerned about the programs (41% have changed at least one activity), and those who are concerned about government monitoring of their use of social media, search engines, cell phones, apps, and email. Similarly, those who say they are now less confident that the programs serve the public interest and those who believe the courts are not doing a good job balancing the interests of privacy and law enforcement are also more likely than others to say they have changed these behaviors.

The respondents who say they modified their behavior were asked in an open-ended follow-up question to explain why they changed the way they communicate since learning about the programs. Some suggested that they were concerned about how their communications would be interpreted by third parties:

“I don’t search some things that I might have before.”

“Somewhat concerned to look up certain information on search engines, since it may appear suspicious, even if my reason is pure curiosity.”

“I used to be more open to discussing my private life online with my select friends. Now I don’t know who might be listening.”

“Can’t joke about stuff that could be taken as a threat.”

The respondents who said they had not changed their behavior in any notable way were asked why and some of the answers included:

“I really don’t worry about government monitoring since they would have no interest in what I’m doing. I’m more cautious about what I post and say for personal reasons.”

“I actually haven’t changed anything, at least consciously. I forget that I might be monitored, to be honest.”

“I haven’t changed it much simply because I don’t feel it’s worth the effort.”

The respondents who say they have heard something about the government surveillance programs were asked about a number of offline and online activities and whether they had done anything to hide or shield their information from the government in response to learning about it.

A majority say they have not changed any communications or online activities since learning of the phone and internet monitoring programs. Still, 34% of those who have heard about the programs say that they have changed at least one of the following: 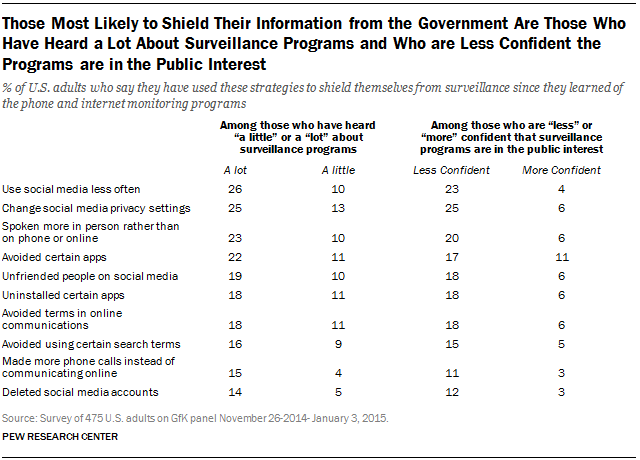 Those most likely to have taken these steps include adults who have heard a lot about the surveillance programs and those who say they have less confidence since the Snowden revelations that the programs are in the public interest.

Some have taken relatively simple steps to make their activities more private, but just a fraction have taken more sophisticated steps

Those who said they had heard about the government surveillance programs were asked whether they had used any of a number of available tools to make their communications more private since they had learned about the U.S. phone and internet monitoring programs. Some 25% said they used more complex passwords and 19% said they had changed the privacy settings on their social media accounts such as Facebook or Twitter.

In both cases, younger adults under the age of 50 were much more likely than older adults to say they had used at least one of these strategies. And those with at least some college education were more likely than others to have done the same. At the same time, those most likely to say they have not used these tools are the respondents who say they are not concerned about the surveillance programs and those who say they do have confidence the programs are serving the public interest. There are no notable partisan differences in people’s responses to questions about these tools.

Sophisticated tools and techniques are widely available and can help online Americans increase the privacy and security of their online activities and personal data sharing. However, thus far, fairly few have adopted these tools since learning about the programs. Among those who have heard about the government surveillance programs:

The vast majority of citizens say they have not adopted or even considered some of the more commonly available tools that can be used to make online communications and activities more private:

As a rule, older Americans and those who have a high school diploma or less are more likely to say they have not heard of many of the tools on our list when compared with those who are younger or have higher education levels. Interestingly, both heavy and light technology users are equally likely to say they do not know of these tools.

When asked for their reasons for changing privacy behaviors by embracing these tools and strategies, respondents described a variety of motivations, ranging from a principled defense of privacy, to guarding their information from criminals:

“Because it’s no one’s business whom I talk to [or] what I talk about.”

“To encrypt my financial data from hackers.”

“To keep anyone, not just the government, from having access to my personal information online.”

Others who did not adopt the above tools or strategies said that it takes significant time and effort to learn about privacy-protecting measures:

“I do not know anything about some of them and do not have the time to research them at this time.”

“I do not feel expert enough to know what to do to protect myself, and to know that the protection chosen is effective. Technology changes very fast.”

Still, others said they avoid taking more advanced privacy measures because they believe that taking such measures could make them appear suspicious:

“There’s no point in inviting scrutiny if it’s not necessary.”

“I didn’t significantly change anything. It’s more like trying to avoid anything questionable, so as not to be scrutinized unnecessarily.”

“[I] don’t want them misunderstanding something and investigating me.”