The local news and information environment is changing in ways that most people believe makes it easier for them to get the specific information they want about their communities. More than half of Americans (55%) say it is easier today to get the local information they want than it was five years ago. Just 12% say it is harder, and 30% say they have noticed no change over that time. Younger adults and those with the most access to technology (especially broadband and smartphones) express the most enthusiasm about the increased ease of using the local news and information ecosystem over the past five years. 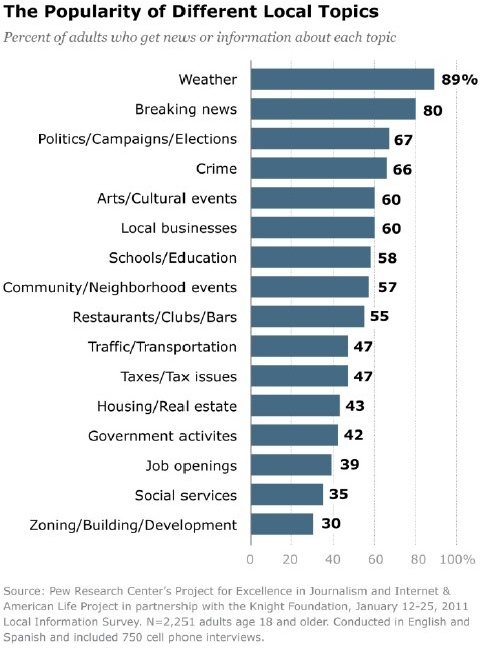 One of the newer realities of this environment is that people now have greater ability to get material on the subjects that most matter to them and not bother with those that don’t. It is clear from this survey that not all local topics are equally popular. The survey asked a nationally- representative sample of adults whether they ever get news and information about 16 different local topics. Data show that while some local topics are followed by the large majorities of adults (weather, breaking news, politics and crime), others (zoning and development, social services, job openings) interest much smaller segments of adults.

Moreover, the demographic portrait of the audience changes by topic, and often in turn reflects the platforms they rely on. For instance, if a subject is particularly appealing to older consumers, traditional platforms such as television news and newspapers are often the primary sources. On the other hand, if the subject is particularly relevant to younger adults, then the internet is likely to be the top source for that information.

The figure below indicates which adults are most likely to seek specific kinds of local information. (Click here for a larger version.)

In addition to the topic-specific demographic patterns noted in these graphics, several broad local news consumption patterns emerged. As a rule, those with higher levels of education and higher levels of income are more likely to follow most of the local news topics asked about, particularly those with a civic dimension such as politics, government news, and community events.  In addition, those who are older and those who have lived in their communities longer are more likely than younger people and community newcomers to be tuning in to information about many local topics, including social services, tax issues, and local schools.

The sources people use to get local news and information

While the main focus of the survey were the questions in which respondents were asked which sources they “rely on most” when gathering news and information about 16 different local topics, it also included a broader question about the overall frequency with which people use various platforms for getting local news and information.

The figure below indicates the sources people use at least once a week to get “local news and information,” in descending order. 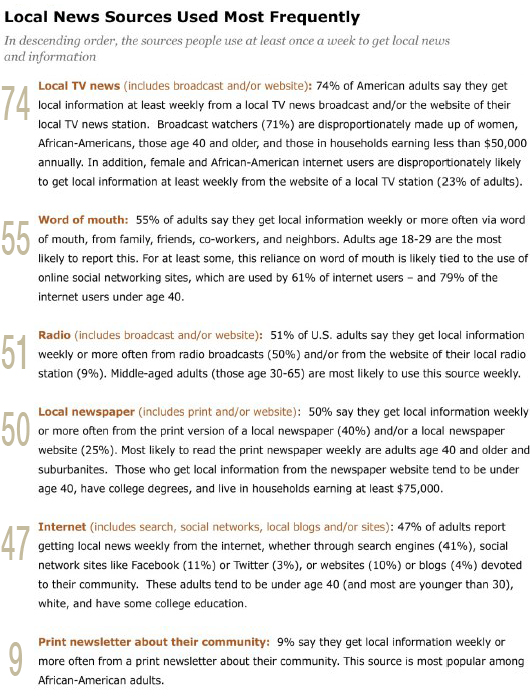 Next: Part 3: The role of newspapers
← Prev Page
Page1You are reading page2Page3Page4Page5Page6Page7Page8
Next Page →