Perceptions of the importance of local newspapers

The survey indicated that newspapers play a far more complex role in the civic life of communities than many Americans believe.

Local newspapers continue to be a key information source

Among all adults, newspapers were cited as the most relied-upon source or tied for most relied upon for crime, taxes, local government activities, schools, local politics, local jobs, community/neighborhood events, arts events, zoning information, local social services, and real estate/housing.

This dependence on newspapers for so many local topics sets it apart from all other sources of local news.  The internet, which was cited as the most relied upon source for five of the 16 topics, was a distant second to newspapers in terms of widespread use and value.

This sense from the public that newspapers are a place where they can turn to for information on a wide range of local topics, more so than other sources, confirms findings from other Pew Research Center studies, particularly a report on which news organizations tend to break new information in local news reporting conducted in Baltimore and research on what news is available from different sources produced as part of the State of the News Media 2006 report.2 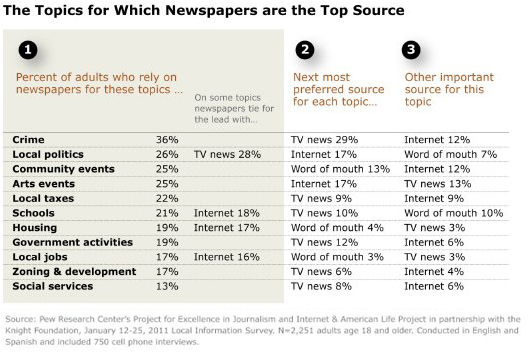 The problem for newspapers is that many of these topics are followed by a relatively small percentage of the public. As noted in Part 2 of this report, just 30% of adults get information about zoning, 35% about social services, 42% about local government, and 43% about real estate. Thus, overall, the total number of Americans who rely on newspapers for the local information that matters to them is smaller than is the case for other platforms such as television.

For instance, 48% of those who get information about taxes turn to newspapers, more than double the percentage who turn to the next most popular platforms, the internet (20%) and TV news (19%).  But when translated as a percentage of all citizens, just 22% of Americans rely on newspapers for tax information. Thus, while newspapers command this subject area, most people simply do not seek out information about the subject of local taxes.

People may be making quite logical choices in this. Past PEJ studies have found that local newspapers typically have 70 to 100 stories a day. The typical half-hour local TV newscast is closer to 15.3 So it is logical that newspapers would offer coverage of more topics in a community, while television might concentrate on a more limited number that attract the widest audience. Indeed, as PEJ found in a 2006 study, “In local metro dailies, citizens were far more likely to learn about things like taxes, education, zoning commissions and the activities of government than they would in most other media.”4

This, however, also has implications about what could happen if a newspaper in town were to disappear. If television has focused on covering weather, traffic, and breaking news, and that is what people look to this platform for, will television begin to cover taxes and zoning and education if the local newspaper no longer exists? Would new digital sources emerge to cover the hole if a local newspaper cut back its coverage or vanished altogether? And would the approach of these new sources be fully journalistic in nature?

Generational preferences add yet another layer of complexity. For adults under age 40, newspapers do not hold nearly the same appeal. Consider this stark difference: among all adults, newspapers are the clear top source for seven local topics (and tied with the internet as the top source for four other topics). Yet, among adults under 40 newspapers are the clear top choice for one topic, taxes, are tied with TV news for another topic, crime, and tie with the internet for four other topic areas. (The specifics of these differences are spelled out in Part 5 of this report.)

For all ages, the strength of newspapers comes from aggregating an audience by offering a wide range of information, even if each subject or story has limited audience. That model may be vital from a civic standpoint, but it is traditionally expensive and it is not clear what the incentive is to replicate it if newspapers were to disappear.

Next: Part 4: The role of local TV news
← Prev Page
Page1Page2You are reading page3Page4Page5Page6Page7Page8
Next Page →