The internet has become a significant local information source

The internet has already surpassed newspapers as a source Americans turn to for national and international news.9 The findings from this survey now show its emerging role as a source for local news and information as well.

Among the 79% of Americans who are online, the internet is an even more significant source for local news and information. Looking just at this group, the internet is the first or second most important source for 15 of the 16 local topics examined. The internet ran a distinct third place for local crime news, a category for which internet users are more likely to turn to newspapers and television. However, for most local information topics asked about—from local restaurants to weather to politics to local businesses—internet users have found online-only sources that they rely upon—and this does not include the websites of legacy media.10

Among adults under age 40, similarly, the internet rivals or surpasses other platforms on every single topic area except one (breaking local news). It is first or tied for first on 12 topics and a second choice for three others. This poses a major challenge to more traditional news providers, especially newspapers, which have often aspired to be a relatively comprehensive source of information on all of these topics.11 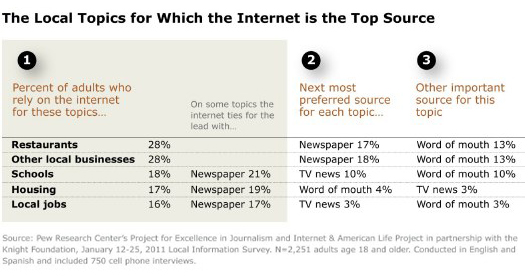 Beyond the topics for which it is the top source, the internet is often the second-most important source of information on a variety of other topics. They include community events, weather, and local arts and cultural activities.

Interestingly, even as the web has gained traction, there is one major area where it still lags well behind—breaking news. Here, local television news (which includes local TV websites but is driven almost entirely by broadcasts) still well outpace online sources. Among all adults, 55% say they rely on local TV for breaking news, compared with 16% who say they rely on the internet and 14% who rely on newspapers.

The internet is a key source for peer-generated information

The two local topics for which the internet already takes the clearest lead, even when including adults with no access to the web, are restaurants and local businesses. With its ability to sort data quickly and assimilate large numbers of consumer reviews, the internet is gaining as a way to give people information that is personal and particular, such as what kind of nearby restaurant might be widely praised and patronized for a certain kind of cuisine. At the same time, the internet has also become a place where locally-oriented content creators can share material directly with specific audience groups that traditional news organizations have not covered comprehensively. (It is worth noting that this survey did not take account of location-based services that have just recently become available on mobile devices and are starting to be used by early adopters.12)

In the past, reviews of restaurants and sometimes local businesses were provided by traditional news organizations – especially newspapers. At times, other companies provided guides that critiqued locale fare. Now, information services like Yelp, which offers citizen reviews and restaurant information, or Craigslist.com, which carries local classifieds, are mainstays of this information in many communities. Those services might have been developed by traditional news companies but were not and the audience has gravitated to the new platforms. The newer online services are also helped by the fact that their material is permanently searchable and therefore more comprehensively available to would-be patrons in ways that traditional newspapers and broadcasts are not.

Only small percentages of adults said they relied most on social networking websites like Facebook and Twitter for local information.  Those sites are included in the internet category, but within this category run a distant third behind search engine and special topic sites.

Below is a detailed look at the local information topics where the internet is a primary source.

Restaurants, clubs and bars: Some 55% of adults surveyed said they at least occasionally get information about local restaurants, clubs, or bars. As noted in Part 2 of this report, those who seek such information are disproportionately female, age 18-39, college-educated, urban or suburban, and internet users.

The internet has become the most popular source for this information in significant part because search engines outpace other sources for information about restaurants, clubs, or bars. Some 21% of adults say they rely on search engines for this information; that is particularly true for the young, the upscale, those who have lived in their communities a relatively short amount of time, and those who live in urban and suburban areas. In addition to search, some 9% of adults use websites specially focused on entertainment establishments like restaurants, such as Yelp or Trip Advisor; another 2% say they rely on social networking sites provide them such information. Here too young adults stand out as being more likely than their elders to rely on these internet sources, as are those who live in non-rural areas.

Other local businesses: Some 60% of all adults say they get information about local businesses other than restaurants and bars. In Part 2, we noted that the people who get such information are disproportionately those who have college experience, live in relatively well-off household, and are age 40 or older.

Overall, 28% of all adults say they rely on the internet to get this information versus 18% who turn most to newspapers and newspaper websites, 13% who rely on word of mouth referrals, and 5% who look to TV news broadcasts and websites.

And again, it is the search engines which are the biggest draw. Fully 21% of adults say they turn to search engines when seeking this information; and that is particularly true for those under age 40, those with some college education or college degrees, those who are parents, those who live in suburban and urban areas, and those who have relatively recently moved into a community. Some 10% of adults use websites with particular information about local businesses and just 1% social networking sites like Facebook and Twitter provide them such information.

When it comes to getting information about local schools on specific domains on the internet, 10% of adults say they rely on specialty sites and 9% rely on search engines.

Local jobs: In this survey, 39% said they seek information about local job openings and they are disproportionately African-American, under age 40, and living in lower income households.

Of those who seek local job information, the internet and newspapers are relied upon in roughly equal measure. Some 17% of adults say they rely most on newspapers for local jobs information, while 16% say they rely most on the internet. However, the profiles of the two groups differ markedly. Those who count on newspapers tend to be 40 or older, have no college education, and are longtime residents of the community. Those who count on the internet are likely to be under age 40, with some college education or a college degree, and to have lived in their community for less than 10 years.

For those who prefer the internet for job searches, specialty websites are particularly popular. One in ten adults (10%) get information about local job openings from specialty sites, while 8% rely on search engines and fewer than 1% say social networking sites are their primary source.

For those who use the internet to get information on local housing, there is an even split between relying on search engines (9% of adults use them) and specialty sites (9% use them).

It is noteworthy that the websites of traditional local news platforms do not register at major levels on most of the subjects probed in the survey. It could be the case that those websites are not the most important source that people rely upon but they still see value in those sites as a supplemental resource or as a starting point for deeper research on a local topic that matters to them. According to online traffic data of news websites, for instance, legacy media—and particularly newspapers—tend to rank quite high relative to other sources.13 Still, taking people at their word about legacy media online, there are some topics on our list that websites of news organizations could conceivably be even more potent than traditional newspapers or TV broadcasts and yet they are not. These include breaking news, weather, crime, and activities related to topics that are highly personalized like restaurants, housing and real estate, community events, and jobs.

In none of our topics did more than 6% of respondents say they depended on the website of a legacy news organization. Some 6% said they relied on a TV station’s website for weather information and that was the high mark for any traditional news organization’s web operation. In addition 5% said they relied on a TV station website when there was breaking news in their community, and 3% relied on local TV websites for local political news. After that, TV news websites barely registered.

Some 5% said the website of their local newspaper was the platform they most relied upon to get crime news. On that topic the printed newspaper was considerably ahead of other platforms as the most relied-upon resource. Newspaper websites had a small foothold on some other subjects, as well.  Four percent cited the newspaper site as their primary source for local political information, while 3% said it was their primary source for breaking news, local jobs, taxes, arts and cultural news, restaurants, and local taxes.

Next: Part 6: Mobile, social networks and apps in the local information landscape
← Prev Page
Page1Page2Page3Page4You are reading page5Page6Page7Page8
Next Page →