Local TV is a critical source for everyday news

For many years, polls have shown that local TV is the most popular medium in America for news. This survey, however, adds interesting and limiting dimensions to that finding.

Local TV (which for the purposes of this survey includes both televised broadcasts and local television websites) is the most popular source for the two topics that almost everyone is interested in—weather and breaking news. It has made itself essential in people’s lives for events happening right now, though the survey also finds that the internet is creeping into those territories.

It is also striking and potentially significant for the future that local TV ranks relatively low on the list of key sources for other local topics that garner more limited interest but reflect much of the day-to-day activities of local civic life.

Overall, 89% of adults say they get information about local weather and 80% follow local breaking news. When asked what source they rely on most for this kind of news, local TV clearly ranks first.  Fully 58% of adults say they turn to local TV for weather information; 55% named local TV as their top source for breaking news. The internet ranks second for both of these topics, but with a gap of more than 25 percentage points (32% turn to the internet for weather and 16% for breaking news). 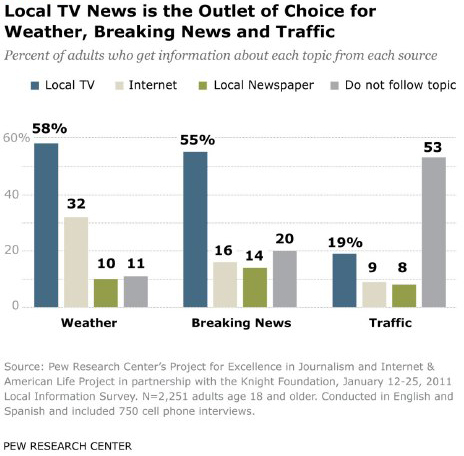 Local television is also the outlet of choice for adults interested in traffic and transportation news and information, though less than half of those surveyed (47%) say they follow this topic at all.

For breaking news, local television’s dominance cuts across age groups.  Even among adults under 40, roughly twice as many turn to TV as turn to the internet, 47% versus 22%.

When it comes to weather updates, however, the under-40 audience is nearly split: 44% name local TV as their primary source and 41% cite internet sources other than local television or newspaper websites.  The same TV versus web divide occurs among social network users and mobile news consumers—two practices still most heavily used by younger generations. 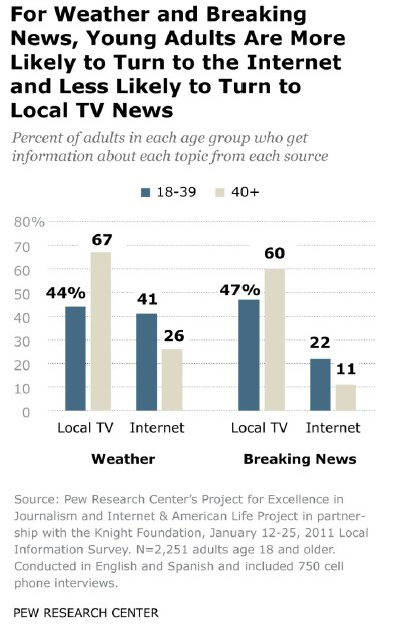 One area in which television finds itself in head-to-head competition with other platforms is local politics. Two-thirds of Americans follow news and information about local political matters, and roughly the same percentage turn to television newscasts (or television websites) for this information (28%) as turn to the local newspaper or its website (26%). The internet is third at 17%, and the data suggest over time its share of the audience will grow. Among adults under age 40, the internet is already the top source for local political information and news — 26% of adults in this age group name the internet as their top source for this topic, while 19% name local TV news.

Where local politics are concerned, a clear boost for television news comes from minority populations. Hispanics are more than four times more likely to name local television as their top source for local politics as they are to name newspapers (38% versus 11%). African-American adults also prefer local TV over local newspapers as a source for this topic, though not quite to the same degree (38% versus 23%). 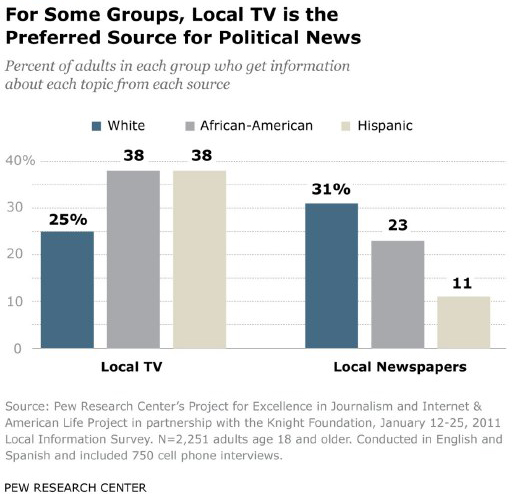 Television also clearly beats out newspapers as a source for local political news among non-internet users (41% to 27%) and among the less educated and those with lower household incomes.

Beyond these four local topics, though, television news is rarely named as a primary source. In fact, in half of the topic areas asked about, fewer than 10% of adults name television as their primary source. This includes information about housing, jobs, community events and taxes.

In short, local TV news has thrived by developing a franchise around a handful of topics that have the widest appeal.

What does all this portend for the future of the medium? Local television still has a hold on some of the most sought-after local topics, and ones that people seek out most often. But these are also topics for which convenience and timeliness are key features, and television might easily be replaced by mobile platforms that are even more accessible than TV. For weather, this may already be happening–as roughly a third 32% cite the internet as a primary source and 7% cite mobile devices. Weather apps and websites can often have as much or more information on local weather, and can localize it even more narrowly, than a local TV newscast might.

And for most of the local topics that require more deep reporting and analysis, such as taxes or zoning or local business, consumers already turn to platforms other than television.  As news outlets try to find their place in the evolving information ecosystem, then, local news may be in a vulnerable position. What television has that others do not is the force of personality of local anchors and reporters on camera.

Next: Part 5: The role of the internet
← Prev Page
Page1Page2Page3You are reading page4Page5Page6Page7Page8
Next Page →