After more than a year of Republican presidential candidate Donald Trump making provocative comments about Mexican and Muslim immigrants and Hispanics in general, a new Pew Research Center survey of Hispanics finds their overall attitudes about the Republican and Democratic parties – and levels of political engagement – are not much different than they were four years ago. 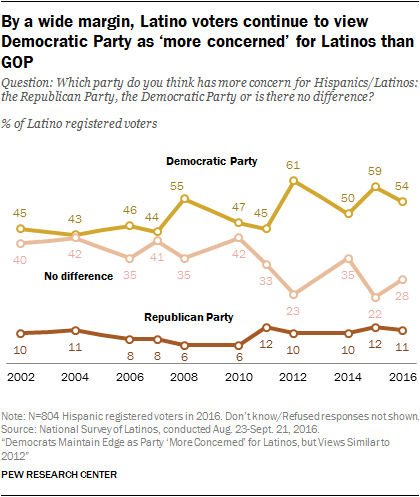 About half of Latino registered voters (54%) continue to say the Democratic Party is more concerned for Latinos than the Republican Party; just 11% say the GOP has greater concern, while 28% say there is no difference between the parties. Democrats held a similar advantage four years ago, when by 61% to 10%, more Latino voters viewed Democrats as more concerned about Latinos.

Trump’s campaign comments about Hispanics have resonated widely. Fully 75% of Hispanic registered voters say they have discussed the Republican candidate’s comments about Hispanics or other groups with family, friends or coworkers in the past year. And among Hispanic registered voters who have discussed Trump’s comments, 74% say they have given “quite a lot” of thought to the presidential election and 74% say they are “absolutely certain” they will vote.

In 2012, in a two-way contest between Barack Obama and Mitt Romney, Obama won 71% of the Latino vote, while just 27% supported Romney, according to national exit polls. That was one of the largest Democratic advantages among Latinos dating back more than two decades, according to a post-election analysis of the Hispanic vote.

Notably, Clinton’s support is lagging among Hispanic Millennials (those ages 18 to 35 in 2016), who will make up nearly half of the record 27.3 million Latinos estimated to be eligible to vote in 2016. Among Hispanic Millennials, 48% support Clinton, while 15% back Trump; about as many favor Johnson or Stein (13% each) and 11% chose another candidate or offered no opinion. Among all older Latino voters (ages 36 and older), Clinton has 66% support, Trump 21% while just 7% back Johnson and 1% support Stein.

In addition, Clinton receives less-positive backing from Latino Millennials who support her than from older Latino voters. About two-thirds (64%) of Millennial Latinos who back Clinton describe their support as more a vote against Trump than a vote for Clinton. By contrast, 65% of older Clinton supporters say their support is more of a vote for her than a vote against Trump.

A similar generation gap in positive voting is seen among Clinton’s supporters more generally. In an August Pew Research Center survey of U.S. adults, most Millennial voters who supported Clinton (62%) said they saw their vote more as a vote against Trump rather than for Clinton. Meanwhile, most older Clinton supporters (57%) viewed their vote more as an expression of support for Clinton.

With the number of Latinos eligible to vote reaching a record 27.3 million, Latinos could be more important than ever in the upcoming election. But a big question about the Latino vote is how many will turn out this year given that Latino voter turnout rates have long trailed those of other groups.

Yet, even though a lower share of Latino registered voters say they are certain to vote than in 2012, engagement with the election is roughly similar. Two-thirds (67%) say they have given “quite a lot of thought” to it in 2016, while in 2012, 61% said the same. 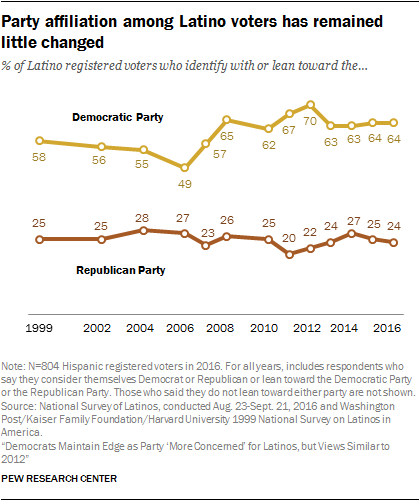 Democrats continue to hold a significant lead over Republicans in political party identification among Latino registered voters. About two-thirds (64%) of voters say they identify with or lean toward the Democratic Party while 24% say the same about the Republican Party.

There has been little change over the past 15 years in the share that identifies as Republican among Hispanic registered voters. In 1999, 25% identified with or leaned toward the Republican Party. Meanwhile, Democrats have made gains during this time, with the share identifying with or leaning toward the Democratic Party rising from 57% in 2007 to 70% in 2012, and holding relatively steady since then. Both trends predate the candidacy of Trump.

This report is based on a nationally representative bilingual telephone survey of 1,507 Latino adults, including 804 registered voters, conducted from Aug. 23 through Sept. 21, 2016, by SSRS for Pew Research Center. The survey was administered via landline and cellphone in all 50 states and the District of Columbia and was fielded before the first presidential debate. The margin of sampling error for the full sample is plus or minus 3.3 percentage points at the 95% confidence level; for registered voters, the margin of sampling error is plus or minus 4.6 percentage points.

Dissatisfaction with the nation’s direction rises

Voting and registering to vote

Differences between Clinton and Trump supporters

“U.S. born” refers to people who say they were born in the 50 states or the District of Columbia, Puerto Rico or other U.S. territories, and those born elsewhere to at least one parent who is a U.S. citizen.

“Foreign born” refers to people who say they were born outside of the United States or other U.S. territories to parents who were not U.S. citizens.

Next: 1. Latino voter interest and engagement in 2016
← Prev Page
You are reading page1Page2Page3Page4Page5Page6Page7Page8
Next Page →

Democrats Maintain Edge as Party ‘More Concerned’ for Latinos, but Views Similar to 2012
1. Latino voter interest and engagement in 2016 2. The Latino vote in the 2016 presidential election 3. Views of the nation’s direction and 2016’s top issues 4. Latinos and the political parties Acknowledgements Methodology Appendix A: References