Latino registered voters prefer President Barack Obama over Republican challenger Mitt Romney by 69% to 21% and express growing satisfaction with the direction of the nation and the state of their personal finances but are somewhat less certain than non-Hispanics that they will vote in this election, according to a new nationwide survey of 1,765 Latinos. The survey was conducted from September 7 to October 4, 2012, by the Pew Hispanic Center, a project of the Pew Research Center.

Obama’s current lead over Romney among Hispanics has barely budged throughout the 2012 campaign and is larger than in the 2008 election, when he received 67% of the Hispanic vote to 31% for Republican John McCain (Lopez, 2008).

The new survey also finds a sharp rise in the past year in the share of Latinos who identify the Democratic Party as the one that has more concern for Latinos. Some 61% say this now, up from 45% in 2011. Just 10% say this about the Republican Party, down from 12% in 2011.

The Latino electorate is growing in size and importance. Today some 23.7 million Hispanics are eligible to vote, an increase of more than 4 million since 2008. Hispanics now account for a record 11.0% of the nation’s eligible electorate, up from 9.5% in 2008 (Lopez, Motel and Patten, 2012).

At the same time, however, fully two-thirds (67%) of Latino adults say they believe the Latino vote will have a “major impact” on determining who wins this year’s election. 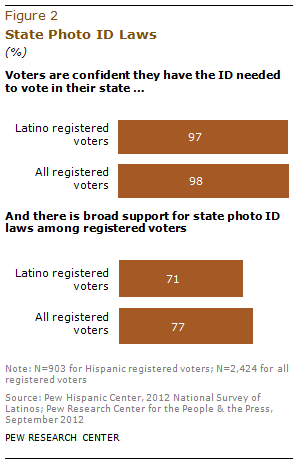 One recent development that could potentially have an impact on the Latino turnout rate is the passage of state laws that require voters to show photo identification in order to cast a ballot. This year 11 states—Florida, Georgia, Hawaii, Idaho, Indiana, Kansas, Louisiana, Michigan, New Hampshire, South Dakota and Tennessee—have such laws in effect.1 Together, these states are home to 15% of all Latino eligible voters.2

The survey also finds broad support among Latino registered voters for voter photo ID laws; 71% favor them, nearly as high a share as among the general public (77%). 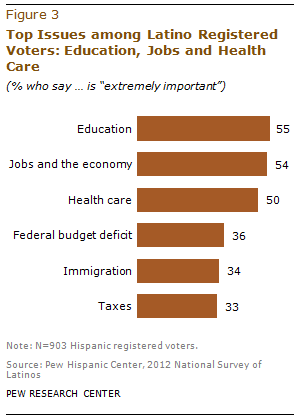 About a third (34%) of Hispanic registered voters say immigration is extremely important to them personally; similar shares say the same about the federal budget deficit (36%) and taxes (33%).

Importance of the Latino Vote

Personal Finances and the State of the Nation

“Eligible voters” refers to persons ages 18 and older who are U.S. citizens, regardless of whether they are registered to vote.

“Photo ID states” are those classified by the National Conference of State Legislatures (2012) as requiring photo identification in order to vote. For the current presidential election, photo ID laws are in place in these states: Florida, Georgia, Hawaii, Idaho, Indiana, Kansas, Louisiana, Michigan, New Hampshire, South Dakota and Tennessee.

Next: II. Latinos and the 2012 Presidential Election
← Prev Page
You are reading page1Page2Page3Page4Page5Page6Page7Page8Page9
Next Page →

Latino Voters Support Obama by 3-1 Ratio, But Are Less Certain than Others about Voting
Latinos and State Photo ID LawsTop Issues among Latino Registered VotersThe Presidential Horse Race and Party AffiliationImportance of the Latino VoteApproval of Obama’s New Policy on Unauthorized Immigrant YouthPersonal Finances and the State of the NationAbout the ReportA Note on Terminology
II. Latinos and the 2012 Presidential Election III. Latino Voter Interest and Engagement IV. Growing Satisfaction with the Nation’s Direction V. Top Issues in this Year’s Presidential Campaign VI. Latinos and Immigration Policy References Appendix A: Demographics of Latino Registered Voters Appendix B: 2012 National Survey of Latinos Methodology