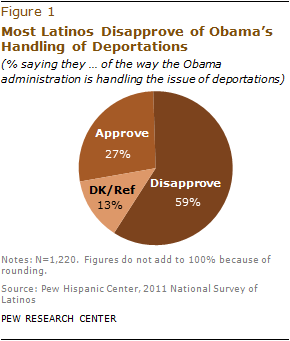 By a ratio of more than two-to-one (59% versus 27%), Latinos disapprove of the way the Obama administration is handling deportations of unauthorized immigrants, according to a new national survey of Latino adults by the Pew Hispanic Center, a project of the Pew Research Center. 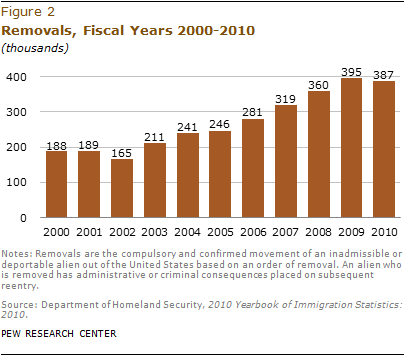 Even as deportations have been rising, apprehensions of border crossers by the U.S. Border Patrol have declined by more than 70%—from 1.2 million in 2005 to 340,000 in 2011. This mirrors a sharp drop in the number of unauthorized immigrants entering the U.S. since the middle of the last decade (Passel and Cohn, 2010).

More than eight-in-ten (81%) of the nation’s estimated 11.2 million unauthorized immigrants are of Hispanic origin, according to Pew Hispanic Center estimates (Passel and Cohn, 2011). Hispanics accounted for an even larger share of deportees in 2010—97%. (U.S. Department of Homeland Security, 2011a). 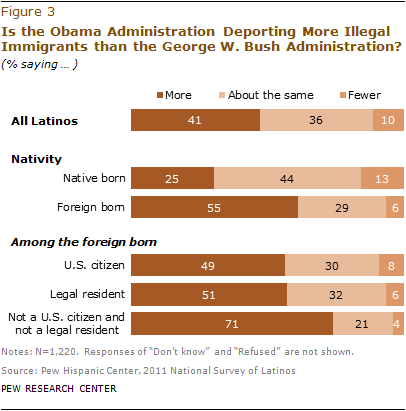 Awareness of the level of deportations is higher among foreign-born Hispanics than among native-born Hispanics—55% versus 25%. It is even higher among those who are most at risk of deportation. Seven-in-ten (71%) Hispanic immigrants who are not U.S. citizens and do not have a green card—a group that closely aligns with the unauthorized immigrant population2—say the Obama administration has deported more unauthorized immigrants than the Bush administration.

These findings are from a new national survey of 1,220 Hispanic adults ages 18 and older conducted by landline and cellular telephone, in English and Spanish, from November 9 through December 7, 2011. The margin of error for the full sample is plus or minus 3.6 percentage points at the 95% confidence level. For a full description of the survey methodology, see Appendix B. 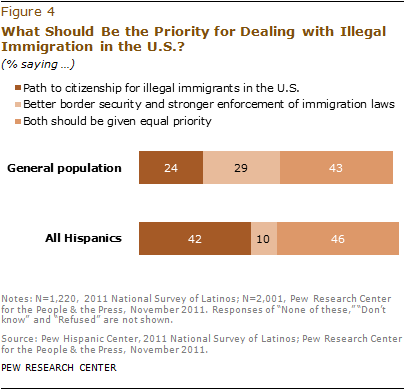 In recent years, the debate over illegal immigration has often been posed as a choice between two competing priorities—increasing border security and enforcement or providing a path to citizenship to immigrants who are in the country illegally.

Latinos are nearly twice as likely as the general public (42% versus 24%) to say the priority should be a path to citizenship for immigrants who are in the U.S. illegally.

The 2012 Presidential Election and Latinos 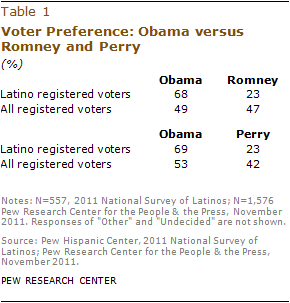 The Pew Hispanic survey also reveals that, heading into the 2012 presidential campaign, Obama and the Democratic Party continue to enjoy strong support from Latino registered voters.

In a hypothetical match-up against former Massachusetts Gov. Mitt Romney, Obama wins 68% to 23% among Latino registered voters. And in a match-up against Texas Gov. Rick Perry, Obama wins the Latino vote 69% to 23%.3 These results closely match the outcome of the 2008 presidential election, when Obama carried the Latino vote over Republican John McCain by 67% to 31% (Lopez, 2008).

Even among those who disapprove of the way Obama is handling the issue of deportations, a majority support his reelection over either of these two potential Republican challengers. Obama would carry this group by 57% to 34% against Romney and 61% to 31% against Perry.

Despite Obama’s strong showing among Latinos when compared with potential 2012 Republican rivals, he has suffered a decline in his overall approval rating as president. Today 49% of Latinos approve of the job he is doing, down from 58% in 2010. Among the general public, Obama’s approval trend has been more stable during the past year (Pew Research Center for the People & the Press, 2011a). His current rating—46%—is still somewhat lower among the general public than among Latinos, but this gap has narrowed significantly in the past year. 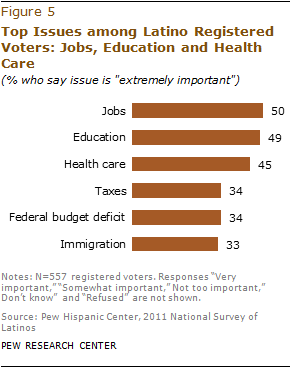 The survey finds that jobs, education and health care are the top issues for Hispanic registered voters as they think about the upcoming presidential election. Half identify jobs as extremely important to them personally, followed closely by education (49%) and health care (45%). These top three reflect the same three issues Hispanic registered voters identified as most important in 2010 (Lopez, 2010) and in 2008 (Lopez and Minushkin, 2008).

Next: II. Recent Trends in U.S. Immigration Enforcement
← Prev Page
You are reading page1Page2Page3Page4Page5Page6Page7Page8Page9
Next Page →