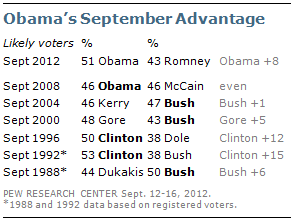 At this stage in the campaign, Barack Obama is in a strong position compared with past victorious presidential candidates. With an eight-point lead over Mitt Romney among likely voters, Obama holds a bigger September lead than the last three candidates who went on to win in November, including Obama four years ago. In elections since 1988, only Bill Clinton, in 1992 and 1996, entered the fall with a larger advantage. 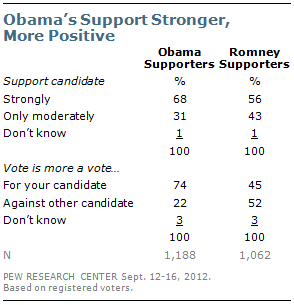 Not only does Obama enjoy a substantial lead in the horserace, he tops Romney on a number of key dimensions. His support is stronger than his rival’s, and is positive rather than negative. Mitt Romney’s backers are more ardent than they were pre-convention, but are still not as enthusiastic as Obama’s. Roughly half of Romney’s supporters say they are voting against Obama rather than for the Republican nominee. With the exception of Bill Clinton in 1992, candidates lacking mostly positive backing have lost in November.

The latest national survey by the Pew Research Center for the People & the Press, conducted September 12-16, 2012 among 3,019 adults including 2,424 registered voters, finds that Obama continues to be the more likable candidate by a substantial margin; his favorability rating has risen to 55% from 50% in late July, with 42% now expressing an unfavorable view of him. 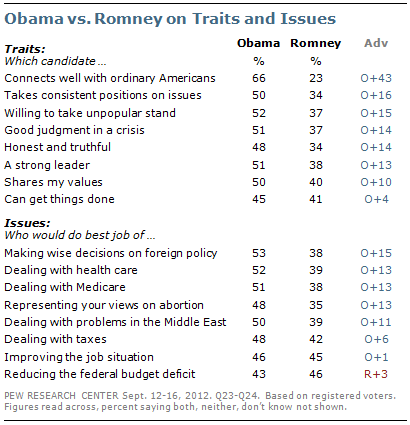 Romney’s favorability also has risen, from 37% in July to 45% currently. But more (50%) continue to view Romney unfavorably. No previous presidential candidate has been viewed more unfavorably than favorably at this point in a presidential campaign in Pew Research or Gallup September surveys going back to 1988.

Romney has gained no ground on Obama in being seen as more credible or more empathetic, and Obama now leads Romney by nearly three-to-one (66% to 23%) as the candidate who connects well with ordinary Americans – an even wider margin than in June.

With the exception of jobs and the deficit, on which voter opinion is about evenly divided, Obama leads Romney on most key issues, notably healthcare, Medicare, and abortion.

And the survey, conducted amid an outbreak of violence in the Middle East and shortly after the killing of the U.S. ambassador to Libya, shows that Obama has a wide edge when it comes to foreign affairs and national security. Far more voters see Obama as a strong leader and as the candidate voters believe would use good judgment in a crisis. Voters also express more confidence in Obama than Romney to deal with foreign policy generally, as well as problems in the Middle East. 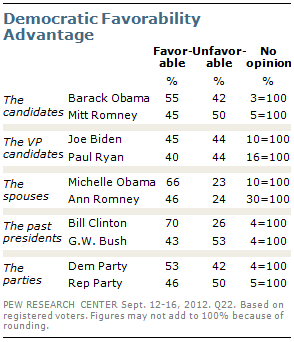 Obama also has a number of other advantages over his challenger. As has been the case for much of the past year, the Democratic Party is better regarded than the GOP by a significant margin; currently, 53% of voters view the Democratic Party favorably while 46% have a favorable opinion of the GOP. Michelle Obama remains extremely popular – 66% have a favorable opinion of the first lady. About as many voters (70%) view Bill Clinton favorably. Joe Biden’s favorable ratings remain mixed, but that also is the case for Paul Ryan, Romney’s running mate. Both Biden and Ryan are among the least popular vice presidential candidates in recent history. 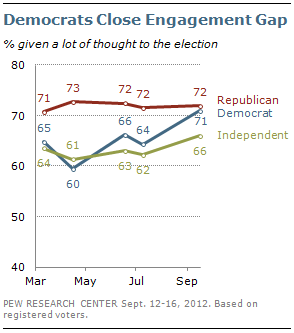 The new survey, which began a week after the Democratic convention ended, finds that Democratic engagement in the 2012 election has spiked, and the engagement gap evident earlier in the campaign has largely disappeared. Democratic voters are now as likely as Republicans to say they have given quite a lot of thought to the election and are following campaign news as closely. Democratic voters also are as committed to voting, and as certain of their vote, as are their GOP counterparts.

Consequently, Obama’s overall advantage – he leads 51% to 42% among registered voters – does not narrow significantly when looking only at those most likely to vote. Among 2,192 likely voters, Obama leads Romney, 51% to 43%. 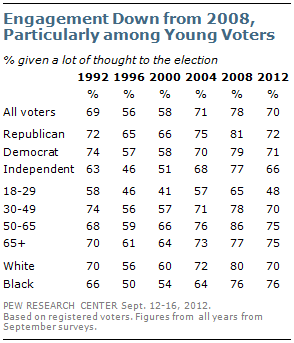 Overall interest in the 2012 election is not as high as it was at this point in the 2008 campaign, with a similar decline among both Democrats and Republicans. But the dropoff in engagement is most noticeable among younger Americans. Just 48% of voters younger than 30 have given a lot of thought to the 2012 election, down from 65% at this point four years ago. The share of young people who say they are closely following election news is down by about half (from 35% to 18%).

By contrast, there has been no falloff in engagement among African American voters. Engagement among black voters, which was higher in September 2008 than in previous elections dating to 1992, remains just as high going into the final weeks of the 2012 campaign.

The nation’s economic situation continues to be Romney’s best friend in this campaign. While trailing on most issues, he runs about even with Obama as the candidate best able to improve the job situation, and there is little indication that voters are feeling better about economy. Just 12% rate national economic conditions as excellent or good. Just 25% say the economy is recovering, while a 46% plurality still thinks it will be a long time before it recovers. 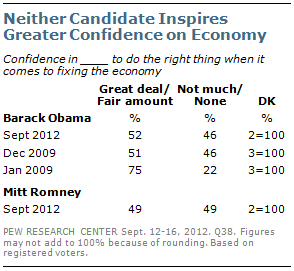 Despite these gloomy opinions, the economy has not turned into a clear advantage for Romney. Almost the same number express confidence in Obama to do the right thing when it comes to fixing the economy (52%); as say the same about Romney (49%).

But the focus on economic issues may benefit Romney among swing voters. Roughly one-in-five voters (22%) are not fully committed to a candidate at this point in the race, and Romney leads Obama by significant margins among these voters as better able to improve the job situation and balance the budget deficit.

Confidence in Obama’s economic stewardship is down significantly since shortly before he took office, but has stabilized in recent years. In January 2009, just prior to his inauguration, fully 75% of voters said they had confidence in Obama to do the right things to fix the economy. After a controversial stimulus plan, heated debate over health care reform and persistently high unemployment, that percentage fell to 51% in December 2009. The current measure shows little change.

Other personal evaluations of Obama show a similar trajectory. The percentage of voters saying Obama makes them feel “hopeful” fell precipitously during the first year of his presidency (from 69% just after his election to 52% in March 2010), but has slipped no further in the three years since (50% in the current survey). Nearly two-thirds (64%) continue to describe Obama as “inspiring,” down from a high of 81% in the days after he was elected, but about the same as in early 2010 (59%).

The survey finds that overall patterns of voter support for Obama and Romney have changed little over the course of the campaign. Obama holds a 56% to 37% lead among women registered voters, but only runs about even among men (47% Romney, 46% Obama). Voters younger than 30 continue to support Obama by a wide margin (59% to 33%). Voters 30 to 49 favor Obama by a 52% to 41% margin; older voters are more evenly divided.

These patterns broadly parallel racial divides in the 2008 vote. And in that regard, a special analysis of the survey finds that racially conservative attitudes play no greater role in opposition to Obama than they did in 2008.

Next: Section 1: The Obama-Romney Matchup
← Prev Page
You are reading page1Page2Page3Page4Page5Page6
Next Page →