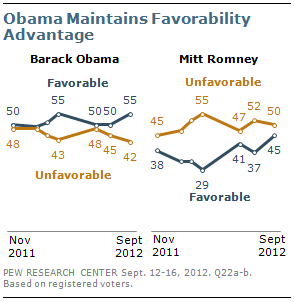 As has been the case throughout the past year, Barack Obama maintains a sizeable favorability advantage over Mitt Romney. Currently, 55% of registered voters express a favorable opinion of Obama, just 45% say the same of his challenger.

Voter impressions of Romney have improved substantially over the past six months. In March – during the heat of the GOP primary campaign – his favorability rating fell as low as 29%, when many Republicans who backed other candidates for the nomination did not feel favorably toward him. Much of the recovery in his ratings since this period comes from within his own partisan base. Currently, 88% of Republicans offer a favorable impression of Romney, up from 76% in July and just 60% in March. 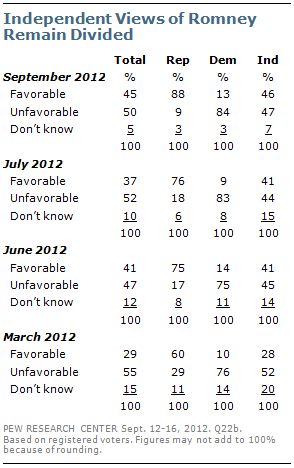 Obama’s standing among independents has improved significantly over the past few months. Currently, 50% of independents offer a favorable impression of Obama, up from 41% in July and 43% in June.

A review of Pew Research Center and Gallup favorability ratings from September finds that Romney is the only presidential candidate over the past seven election cycles to be viewed more unfavorably than favorably. 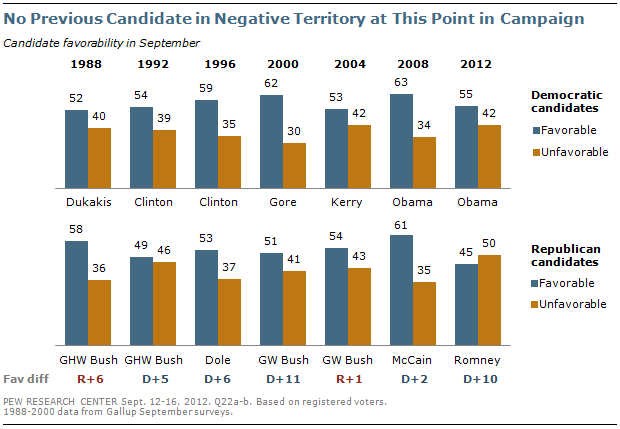 Obama Holds Edge on Most Traits and Issues

Barack Obama continues to hold wide leads over Romney on a number of issues and candidate traits tested. Most notably, two-thirds of registered voters (66%) say Obama is the candidate better described by the phrase “connects well with ordinary Americans,” while 23% say that better describes Romney. 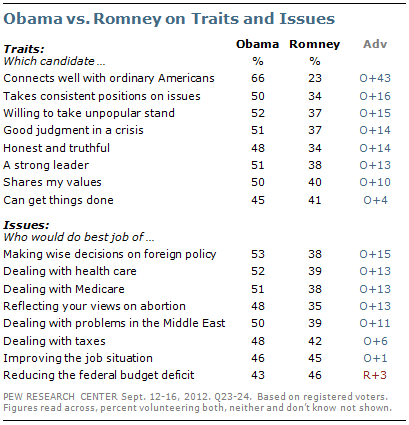 The gap on this question has grown somewhat since it was last asked in June, when Obama held a 59% to 28% advantage over Romney. Even among voters who support Romney, only about half (51%) say he connects with ordinary Americans better than Obama, while 34% say Obama is better in this regard.

While Obama’s advantage is smaller on the other traits tested, he continues to hold a decided edge on many, including as the candidate who takes consistent positions on issues (16 points), is willing to take a stand even if unpopular (15 points) and would use good judgment in a crisis (14 points).

In most cases, Obama fares better against Romney than he did against McCain at a similar point in 2008. For example, 51% now see Obama as having better judgment in a crisis compared with 37% who say Romney. Four years ago, Obama and John McCain were running about even on this question: 45% said McCain was more likely to use good judgment in a crisis and 42% said Obama.

About half (52%) say Obama would do the better job dealing with health care; 39% say Romney would. Despite the divisive debate over the 2010 health care law, these numbers are similar to September 2008 (52% Obama, 31% McCain).

Voters are also split over which candidate would do the best job of reducing the federal budget deficit (46% Romney, 43% Obama). Romney has lost considerable ground on this issue. In June, Romney had a 14-point advantage (50% to 36%) over Obama on the deficit; today, he leads by only three points. However, the deficit was a very strong issue for Obama four years ago. That October, 50% said Obama would do a better job on the deficit, while 30% said McCain would. 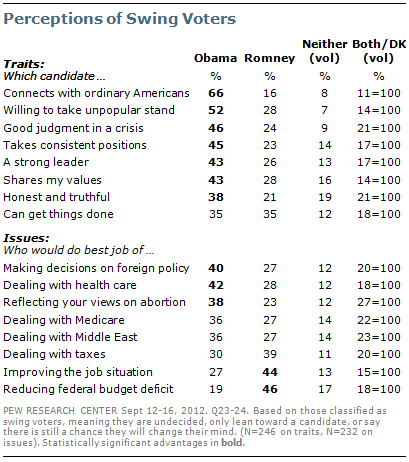 Among the roughly one-in-five voters considered swing voters – either because they are undecided or haven’t fully committed to Obama or Romney – Obama also holds a substantial edge on many of these traits and issues. But when it comes to the key issue of jobs, by a 44% to 27% margin, swing voters say Romney would do the best job of improving the job situation (another 28% say neither or have no opinion).

And while Romney and Obama are tied overall with respect to who can best deal with the budget deficit, Romney holds a decided 46% to 19% edge among swing voters on this issue.

However, swing voters feel that Obama connects well with ordinary Americans and they see him as having better judgment in a crisis, as a stronger leader, and more consistent in his positions. And while four-in-ten swing voters don’t see either candidate as more honest and truthful than the other, Obama still holds a wide advantage over Romney (38% to 21%). 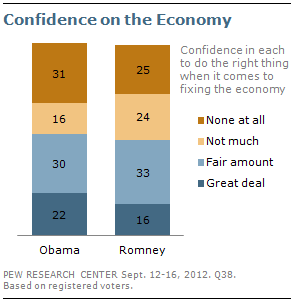 Voters have stronger feelings about Obama than about Romney. More have a great deal of confidence in Obama than Romney when it comes to the economy (22% vs. 16%), but more also say they have no confidence at all in Obama (31% vs. 25%). 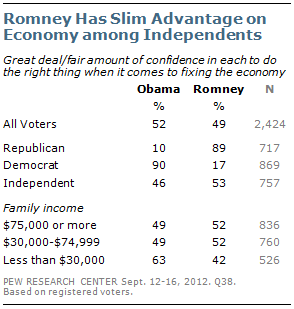 But that level of confidence fell sharply over Obama’s first year in office. By December 2009, only 51% of voters expressed confidence in his economic stewardship and 52% say that today.

Romney holds a slim edge over Obama on the economy among independent voters; 53% express at least a fair amount of confidence in Romney, 46% in Obama. The same is true among swing voters by about the same margin (53% confident in Romney, 45% in Obama). Voters in low income households express far more confidence in Obama than Romney when it comes to fixing the economy, while those with household incomes of $30,000 or more rate the candidates about the same.

Romney’s favorability deficit is reflected in how voters associate specific traits and qualities with each of the candidates. Fully 64% of registered voters say they think of Obama as “inspiring,” while 34% say they do not. Just 36% of voters view Romney as inspiring, while 60% say he is not. 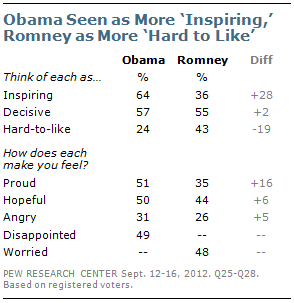 Obama’s image is not nearly as positive as it was in the days following his 2008 election victory. In a post-election survey of voters, fully 81% said they thought of Obama as inspiring, while 69% said he made them feel hopeful and 65% said Obama made them feel proud.

Perceptions became more negative over the first two years of Obama’s presidency, but a sizable majority (64%) continues to describe Obama as inspiring.

Similarly, the percentage saying Obama made them feel hopeful fell from 69% to 52% between the post-election survey in 2008 and March 2010. That percentage fell further, to 43% in October 2011, but has increased since then to 50% today.

Over the past year, there has been a decline in the percentage of voters saying they are disappointed in Obama. In October 2011, 55% expressed disappointment with Obama, while 44% did not. Today, voters are divided, with 49% saying he makes them feel disappointed and 50% saying he does not.

Obama has long engendered anger from some voters. In March 2008, during the Democratic primary campaign, 26% of voters said Obama made them feel angry. That fell to 9% in the November 2008 post-election poll but rebounded to 31% in 2010 and has remained at that level since.

Swing Voters’ Views of the Candidates 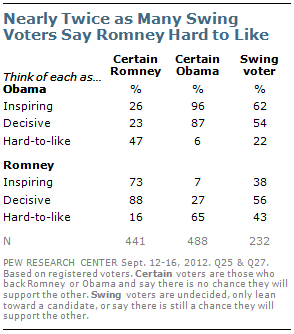 There are substantial differences in how Romney and Obama voters view the candidates’ traits and characteristics. But even many of those who say they are certain to vote for Mitt Romney reject the idea that Obama is hard to like. 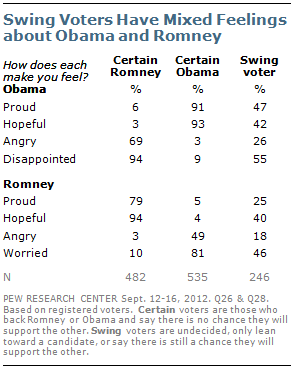 Swing voters have mixed feeling about both candidates. Roughly half (55%) say they are disappointed in Obama but about as many (47%) say Obama makes them feel proud. Conversely, while 46% of swing voters say that Romney worries them, a comparable percentage says Romney makes them feel hopeful (40%). 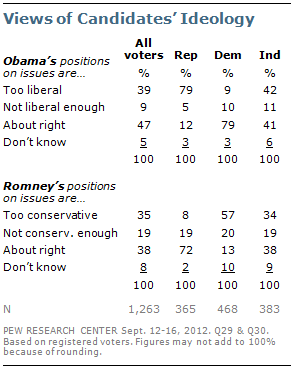 Nearly half (47%) of registered voters say that Obama’s positions on issues are about right, while 39% say they are too liberal. About one-in-ten (9%) say they are not liberal enough.

Fewer (38%) say Romney’s positions on issues are about right ideologically, with 35% saying his positions are too conservative, and 19% not conservative enough.

Obama and Romney on National Security 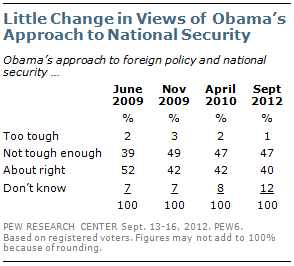 In a separate survey, conducted Sept. 13-16 among 1,001 adults, including 824 registered voters, 47% say Obama’s approach to national security is not tough enough, while 40% say it is about right. This is unchanged from previous surveys conducted in April 2010 and November 2009, when similar percentages of voters said Obama was not tough enough in his approach to foreign policy and national security. 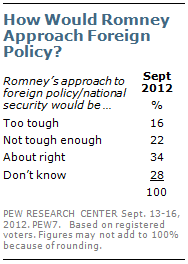 About a third of registered voters (34%) say Mitt Romney’s approach to foreign policy and national security issues would be about right. About one-in-five (22%) say Romney’s foreign policy would not be tough enough, while 16% say it would be too tough. Nearly three-in-ten (28%) offer no opinion.

Obama Ahead with Stronger Support, Better Image and Lead on Most Issues Section 1: The Obama-Romney Matchup Section 2: Interest and Engagement
Section 3: Views of the Candidates
Obama Holds Edge on Most Traits and IssuesObama’s Advantage with Swing VotersTackling the Nation’s Economic TroublesVoters’ Descriptions of CandidatesViews of Obama: 2008-2012Swing Voters’ Views of the CandidatesVoters’ Take on Candidates’ IdeologiesObama and Romney on National Security
Section 4: Views of Vice Presidential Candidates, Candidate Spouses, Former Presidents About the Surveys