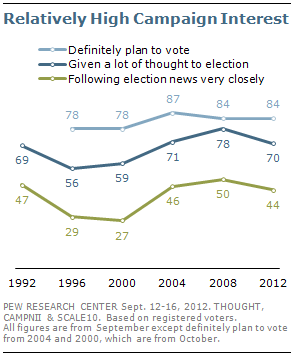 Less than two months before Election Day, voter engagement remains relatively high. Interest is lower than in 2008, but on par with 2004 and 1992 – all elections with high turnout levels. Voters are more engaged than they were in 1996 and 2000; when turnout in November was much lower. 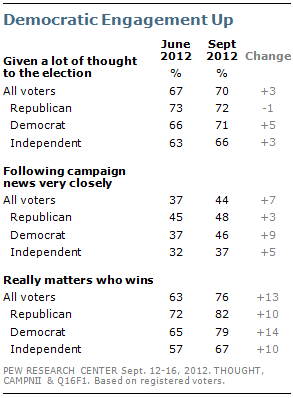 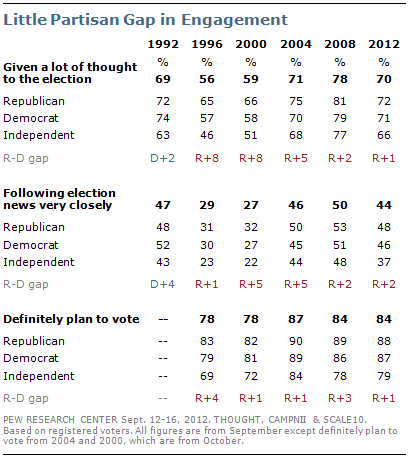 There is little gap between Republicans and Democrats in interest in the campaign and intention to vote. A similar proportion of Republican (88%) and Democratic voters (87%) say they definitely plan to vote in the election.

Similarly, Republicans and Democrats are about equally likely to say they have given a lot of thought to the election. In September 2008, 2004 and 1992, there were was little partisan difference in thought given to the election. However, in 1996 and 2000, Republican voters were giving more thought to the campaign.
As in most previous campaigns, there are no significant partisan differences in interest in campaign news. In the current survey, 48% of Republicans, 46% of Democrats and 37% of independents say they are following election news very closely. 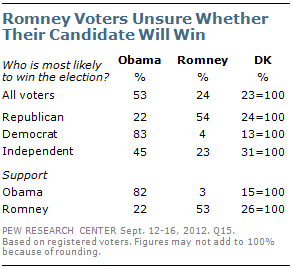 Among Romney supporters, about half (53%) say he is most likely to win; by comparison, 82% of Obama supporters expect their candidate to win. Among swing voters, far more expect Obama than Romney to win (50% vs. 12%); 39% are unsure.

Next: Section 3: Views of the Candidates
← Prev Page
Page1Page2You are reading page3Page4Page5Page6
Next Page →

Obama Ahead with Stronger Support, Better Image and Lead on Most Issues Section 1: The Obama-Romney Matchup
Section 2: Interest and Engagement
Long-Term Trends in EngagementObama Favored to Win
Section 3: Views of the Candidates Section 4: Views of Vice Presidential Candidates, Candidate Spouses, Former Presidents About the Surveys