I. Inside the 2012 Latino Electorate 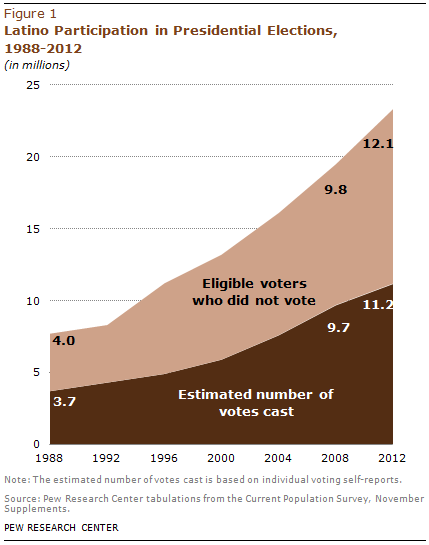 A record 11.2 million Latinos voted in the 2012 presidential election, but Latinos’ voter turnout rate continues to lag other groups significantly, according to an analysis of new Census Bureau data by the Pew Research Center. 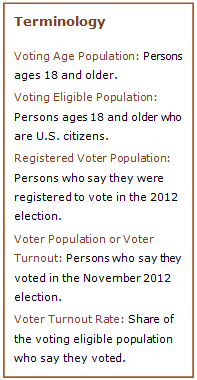 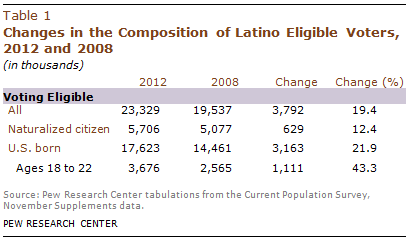 Much of the growth in the number of Latino eligible voters was driven by Latino youth. Among the 3.8 million Latinos who became eligible to vote between 2008 and 2012, 3.7 million were U.S.-born young Hispanics who entered adulthood. Annually, about 800,000 U.S.-born young Hispanics come of age, making them newly eligible to vote (Taylor, Gonzalez-Barrera, Passel and Lopez, 2012).

Overall, Hispanics made up 17.2% of the nation’s population in 2012, 10.8% of eligible voters, but just 8.4% of all voters. Much of this difference is driven by the relative youth of the nation’s Hispanic population and the high number of non-citizen adults among its population (Taylor, Gonzalez-Barrera, Passel and Lopez, 2012). Just 43.9% of Hispanics are eligible to vote while more than half (51.7%) of Asians, 69.1% of blacks and 78.6% of whites are eligible to vote.

In 2012, Latinos supported Barack Obama over Mitt Romney by a margin of 71% to 27% (Lopez and Taylor, 2012) and were an important part of the coalition that re-elected the president. As the electorate diversifies—with Latinos accounting for much of that change—the importance of the Latino vote will likely grow (Taylor, 2013). 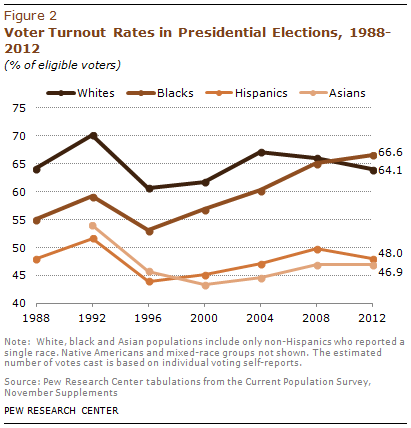 This report summarizes the participation of Latino voters in the 2012 presidential election. Its appendix contains tables and figures about the electorate in 2012, with a focus on Latinos. The data for this report are derived from the November Voting and Registration Supplement of the Current Population Survey (CPS). The CPS is a monthly survey of about 55,000 households conducted by the Census Bureau for the Bureau of Labor Statistics. It is representative of the non-institutionalized population of the U.S. It does not include data on the voting behavior of enlisted military personnel and those who are institutionalized. The November Voting and Registration Supplement is one of the richest sources of information available about the characteristics of voters. It is conducted after Election Day and relies on survey respondent self-reports of voting and voter registration.

The terms “whites” and “blacks” are used to refer to the non-Hispanic components of their populations.

“Foreign born” refers to persons born outside of the United States to parents neither of whom was a U.S. citizen. Foreign born also refers to those born in Puerto Rico. Although individuals born in Puerto Rico are U.S. citizens by birth, they are included among the foreign born because they are born into a Spanish-dominant culture and because on many points their attitudes, views and beliefs are much closer to Hispanics born abroad than to Hispanics born in the 50 states or the District of Columbia.

Next: II. Dissecting the Latino Electorate
← Prev Page
You are reading page1Page2Page3Page4
Next Page →