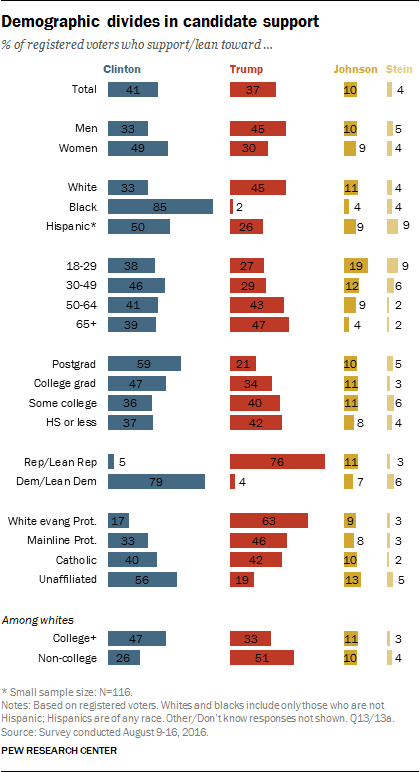 Differences in support across demographic groups are largely consistent with preferences at earlier points in this cycle.

There continues to be a sizable gender gap in vote preferences: Women favor Clinton over Trump by 19 percentage points (49% to 30%), while men back Trump by a 12-point margin (45% to 33%). (For more on the gender gap, see “A Closer Look at the Gender Gap in Presidential Voting”).

Educational differences also are substantial, especially among white voters. Overall, voters with postgraduate degrees favor Clinton by a wide margin (59% vs. 21%), with 10% and 5% expressing support for Johnson and Stein, respectively. College graduates also favor Clinton (47% vs. 34%). Preferences are divided among those with some college experience or less: 41% back Trump, 36% favor Clinton (9% say Johnson and 5% Stein).

White voters without a college degree support Trump by roughly two-to-one (51% vs. 26%). By a smaller margin, college-educated white voters support Clinton (47%) over Trump (33%).

And divides across religious groups continue to be wide, as white evangelical Protestant voters overwhelmingly show support for Trump over Clinton in the four-way contest (63% vs. 17%). By contrast, religiously unaffiliated voters are more likely to rally around Clinton than Trump: 56% back her, compared with 19% who support Trump, 13% who prefer Johnson and 5% who would vote for Stein.

Gary Johnson is currently backed by 10% of all registered voters in a four-way race. When asked their preference in a two-way race, Johnson backers split evenly: 43% say they would support Clinton in a two-way contest, while 42% would favor Trump.

The racial and ethnic makeup of the candidates’ coalitions is also quite different. The overwhelming majority of Trump (87%) and Johnson supporters (79%) are white. By contrast, while a majority of Clinton backers are also white (58%), about a quarter of her supporters are black (24%) and one-in-ten (10%) are Hispanic.

More ‘negative voting’ than in ‘08 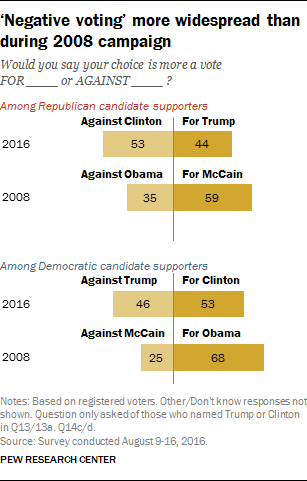 Supporters of both candidates continue to voice attitudes of “negative voting” more now than in the past few presidential cycles. Those who choose Clinton or Trump in the four-way contest express mixed views as to whether their vote is more for their own candidate, or against the opposing candidate.

Next: 2. Perceptions of the presidential candidates
← Prev Page
Page1You are reading page2Page3Page4Page5Page6Page7Page8
Next Page →

Clinton, Trump Supporters Have Starkly Different Views of a Changing Nation
1. Voters’ general election preferences
Profiling the candidates' supportersMore ‘negative voting’ than in ‘08
2. Perceptions of the presidential candidates 3. Views of the country and feelings about growing diversity 4. How voters view the country’s problems 5. Issues and the 2016 campaign 6. Views of Barack Obama and the political parties Methodology