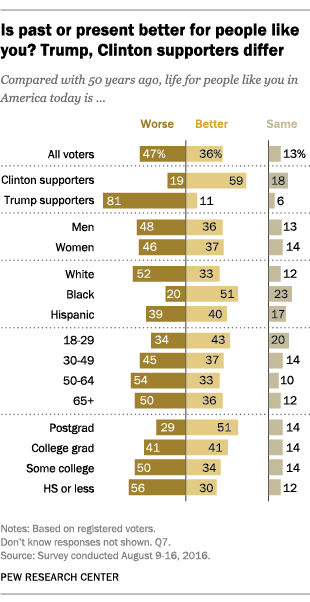 As was the case earlier this year, there are significant demographic differences in these views. About half (51%) of black voters say life is better today for people like them and just 20% say it is worse (23% say it is about the same). By contrast, white voters are more likely to say life has gotten worse (52%) than say it has gotten better (33%); 12% say it 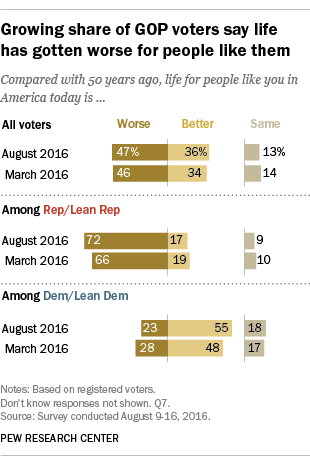 is little different. Hispanics are divided on this question: 4o% say life is better for people like them than it was a half-century ago, while about as many (39%) say it is worse (17% say it is about the same).

Overall, voters’ opinions on this question are little changed since March, but a wide partisan divide has grown wider: In March, 66% of Republican and Republican-leaning voters said that life was better for people like them 50 years ago; today, 72% express this view. At the same time, Democrats’ assessments have become more positive: In March, 48% of Democratic and Democratic-leaning voters thought that life is better today compared with 50 years ago; currently 55% say this.

Will the future of the next generation be better or worse? 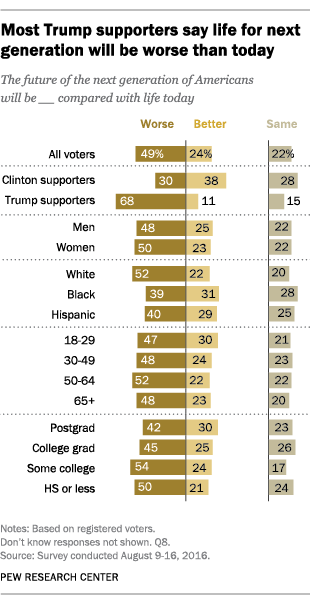 Clinton supporters are roughly evenly divided on this question: 38% say things will be better for the next generation, 30% say they will be worse, while 28% say they will be about the same. Trump backers overwhelmingly say life for the next generation will be worse: 68% say this, while just 11% say it will be better and 15% say it will be about the same.

Views of the future also differ across demographic groups: While 52% of white voters say the future of the next generation will be worse than today and just 22% say it will be better (20% say it will be the same), black and Hispanic voters are somewhat less pessimistic. About four-in-ten of those in each group say life will be worse for the next generation.

Voters are confident that U.S. can solve its problems 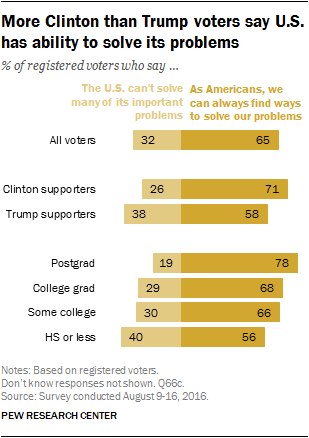 Nearly two-thirds (65%) of voters say that “as Americans, we can always find ways to solve our problems and get what we want,” while just 32% say that “the country can’t solve many of its important problems.” Majorities of both Clinton supporters and Trump supporters have an optimistic view of the nation’s ability to solve its problems, but that view is more prevalent among Clinton backers (71% vs. 58% of Trump supporters).

Those with higher levels of education are the most positive in their assessments of the nation’s ability to solve its problems: 78% of those with postgraduate degrees say this. By comparison, a narrower majority (56%) of those with no college experience say the same.

How has increasing diversity impacted the country? 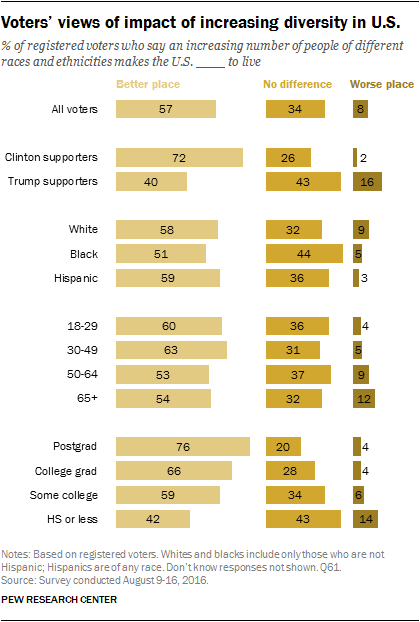 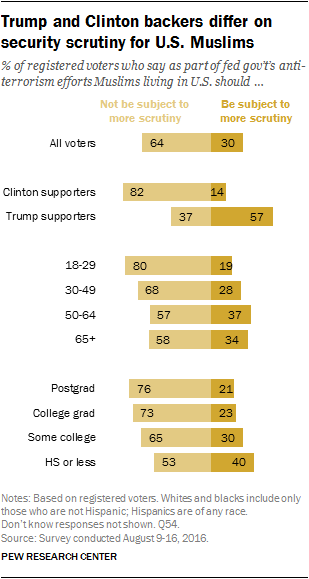 When it comes to the federal government’s efforts to prevent terrorism, 64% of voters say Muslims living in the U.S. should not be subject to additional scrutiny solely because of their religion; far fewer (30%) say U.S. Muslims should receive more scrutiny than people in other religious groups.

Among Trump supporters, 63% of those who think he would be a great or good president say U.S. Muslims should receive additional security scrutiny, while 30% say they should not. Among Trump supporters who say he would be an average or worse president, 52% oppose additional federal scrutiny for U.S. Muslims, while 43% say they should be subject to more scrutiny.

Next: 4. How voters view the country’s problems
← Prev Page
Page1Page2Page3You are reading page4Page5Page6Page7Page8
Next Page →

Clinton, Trump Supporters Have Starkly Different Views of a Changing Nation 1. Voters’ general election preferences 2. Perceptions of the presidential candidates
3. Views of the country and feelings about growing diversity
Will the future of the next generation be better or worse?Voters are confident that U.S. can solve its problemsHow has increasing diversity impacted the country?Views of additional security scrutiny for U.S. Muslims
4. How voters view the country’s problems 5. Issues and the 2016 campaign 6. Views of Barack Obama and the political parties Methodology