As has been the case since January, there is widespread skepticism that either Clinton or Trump would make a good president. 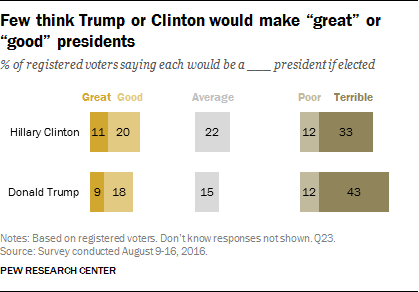 Views of a potential Hillary Clinton presidency are only somewhat less negative. About three-in-ten (31%) say she would be a great or good president, compared with 22% who say she would be average and 12% who think she would make a poor president. A third of voters (33%) say Clinton would be terrible as president – 10 points lower than the share who say this about Trump.

These numbers are little changed since March, when about a quarter said Donald Trump would be a “great” (10%) or “good” (16%) president and about a third said the same about Hillary Clinton (11% great, 22% good). As was the case in the spring, more say either candidate would make a poor or terrible president than say either would make a good or great one. 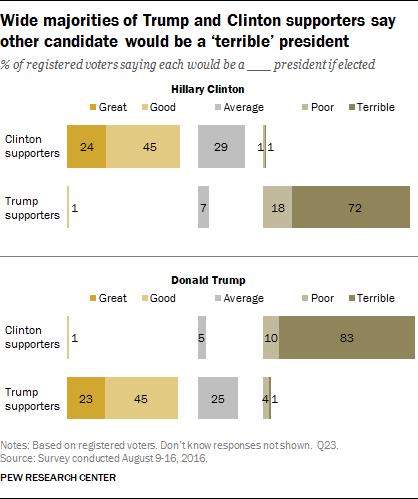 Most say Clinton would continue Obama’s policies if elected 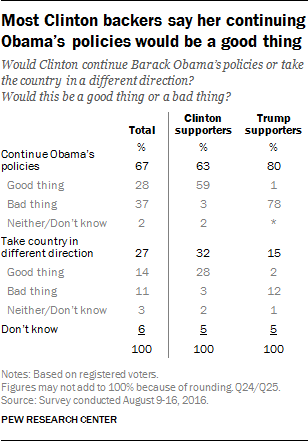 Two-thirds of voters (67%) think that if Hillary Clinton were to win the presidency she would continue the policies of the Obama administration; just 27% think she would take the country in a different direction.

Among Clinton’s supporters, 63% expect that she would continue Obama’s policies and most (59% 0f all Clinton supporters) say this would be a good thing.

Eight-in-ten Trump supporters (80%) say that Clinton would continue Obama’s policies if she were to be elected, but almost all of those who expect her to continue the current administration’s policies say this would be a bad thing (78% of all Trump supporters). 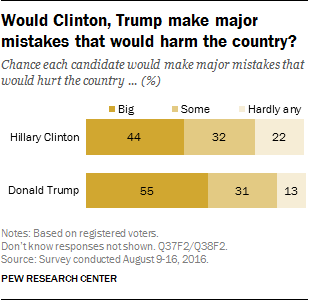 Majorities of voters say there is at least some chance that both Hillary Clinton and Donald Trump would make major mistakes that would hurt the country, if they were elected president. 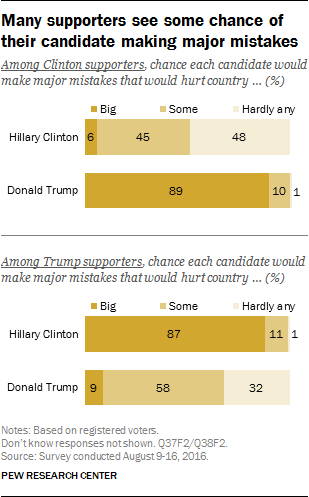 Voters express slightly less concern about a Hillary Clinton presidency: 44% say there is a big chance she would make major mistakes and 32% say there is some chance. About two-in-ten (22%) say there is hardly any chance – nine points higher than the share of voters who say this about Trump.

About half of Clinton’s supporters (51%) say there is at least some chance she would make major mistakes as president, while 48% think that there is hardly any chance. 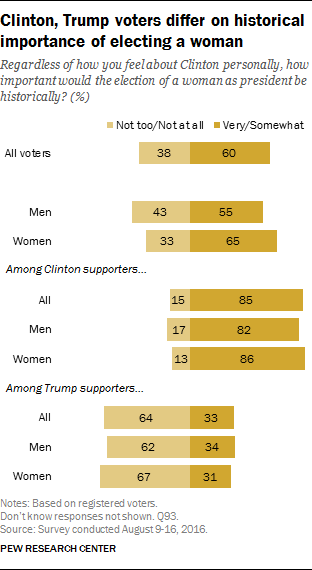 Less than a month after Hillary Clinton became the first female presidential nominee of a major political party, most voters (60%) say it would be either very (41%) or somewhat (21%) important historically for the country to elect a woman president.

Women (65%) are 10 points more likely than men (55%) to say the election of a woman president would be would be very or somewhat important historically. There are far wider differences in views by candidate preference.

Among Clinton supporters, fully 85% say the election of a woman would be very or somewhat important, including comparable shares of men (82%) and women (86%).

By contrast, about two-thirds (64%) of Trump supporters say the election of a woman as president would be not too or not at all important. This view is held by a majority of both men (62%) and women (67%) who support Trump.

Next: 3. Views of the country and feelings about growing diversity
← Prev Page
Page1Page2You are reading page3Page4Page5Page6Page7Page8
Next Page →

Clinton, Trump Supporters Have Starkly Different Views of a Changing Nation 1. Voters’ general election preferences
2. Perceptions of the presidential candidates
Most say Clinton would continue Obama’s policies if electedVoters see chance of both candidates making major mistakes as presidentMost say election of a woman as president would be historically important
3. Views of the country and feelings about growing diversity 4. How voters view the country’s problems 5. Issues and the 2016 campaign 6. Views of Barack Obama and the political parties Methodology