Among the overall public, 53% now express approval of the way Barack Obama is handling his job as president. About four-in-ten (42%) disapprove. This is little changed from June, before the party conventions, when 50% approved and 44% disapproved, but his rating over the last several months remains significantly higher than in recent years.

The last time independents rated Obama’s job performance in positive territory was in December 2012, shortly after his reelection (when 53% approved and 39% disapproved).

Views of the parties 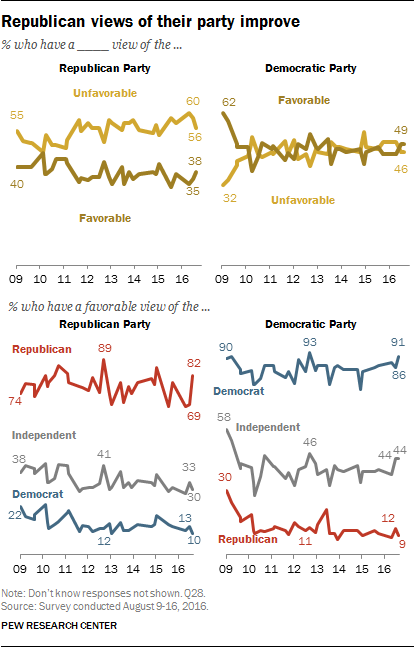 By a 56% to 38% margin, the Republican Party is viewed more unfavorably than favorably among the public. By contrast, about as many view the Democratic Party favorably (49%) as have an unfavorable opinion (46%).

Democrats continue to hold highly positive views of their party: 91% have a favorable opinion of the party. And independents’ ratings of the Democratic Party remain more positive than those of the Republican Party (44% vs. 30%).

Clinton, Trump Supporters Have Starkly Different Views of a Changing Nation 1. Voters’ general election preferences 2. Perceptions of the presidential candidates 3. Views of the country and feelings about growing diversity 4. How voters view the country’s problems 5. Issues and the 2016 campaign
6. Views of Barack Obama and the political parties
Views of the parties
Methodology