Evangelical voters are rallying strongly in favor of Republican presidential candidate Donald Trump. Indeed, the latest Pew Research Center survey finds that despite the professed wariness toward Trump among many high-profile evangelical Christian leaders, evangelicals as a whole are, if anything, even more strongly supportive of Trump than they were of Mitt Romney at a similar point in the 2012 campaign. At that time, nearly three-quarters of white evangelical Protestant registered voters said they planned to vote for Romney, including one-quarter who “strongly” supported him.1 Now, fully 78% of white evangelical voters say they would vote for Trump if the election were held today, including about a third who “strongly” back his campaign.

Meanwhile, religiously unaffiliated voters – those who describe their religion as “atheist,” “agnostic” or “nothing in particular” – are lining up behind Hillary Clinton over Trump, much as they supported Barack Obama over Romney in 2012. Two-thirds of religiously unaffiliated registered voters say they would vote for Clinton if the election were held today, just as two-thirds intended to vote for Obama at a similar point in the 2012 campaign.2 Religious “nones” are, however, somewhat less enthusiastic about Clinton’s candidacy (26% now strongly support her) than they were about Obama in June 2012 (37%). 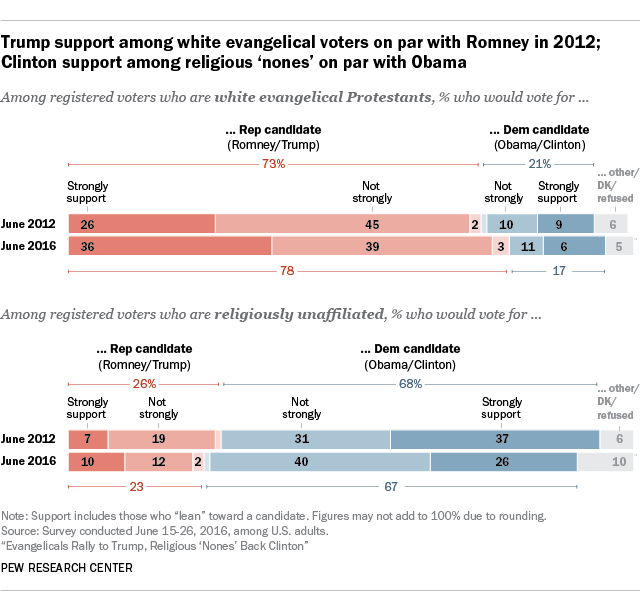 Considering both groups are quite large, the votes of white evangelical Protestants and religious “nones” could be important to the outcome of the 2016 election. White evangelical Protestants make up one-fifth of all registered voters in the U.S. and roughly one-third of all voters who say they identify with or lean toward the Republican Party. Religious “nones,” who have been growing rapidly as a share of the U.S. population, now constitute one-fifth of all registered voters and more than a quarter of Democratic and Democratic-leaning registered voters.3 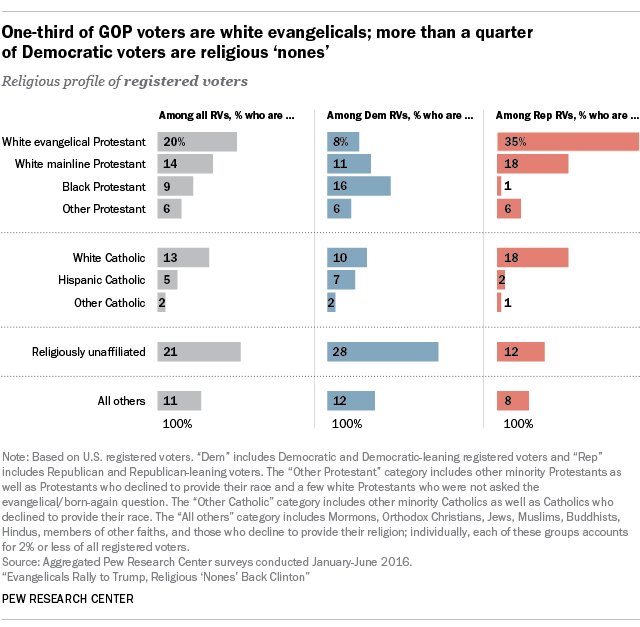 Both groups, furthermore, have leaned firmly toward one side or the other in recent elections. Nearly eight-in-ten white evangelical voters ultimately cast ballots for Romney over Obama in 2012, according to exit polls, despite some questions about whether Romney’s Mormon identity would raise concerns among evangelicals. Seven-in-ten religious “nones” voted for Obama.

During the current campaign, however, there has been ample reason to wonder whether white evangelicals’ strong support for Republicans and the affinity for Democrats among religious “nones” might waver. Many evangelical leaders, for instance, have suggested that supporting Trump for president is incompatible with evangelical principles and beliefs (though some have since reconsidered and are now supporting Trump). And in the current survey, 55% of white evangelical voters say they are dissatisfied with the choice of presidential candidates.

The survey also confirms that white evangelical Republicans who supported someone other than Trump during the primaries are much less strongly supportive of him in the general election than are evangelical Republicans who wanted to see Trump get their party’s nomination. But big majorities of both groups – including 93% of Republican and Republican-leaning white evangelical Protestant voters who wanted someone other than Trump to get the GOP nomination – say that if they had to choose today, they would vote for Trump over Clinton.

On the Democratic side, religious “nones” were among the strongest supporters of Bernie Sanders during the primaries, and some observers have wondered whether Sanders’ supporters would support Clinton during the general election. But here again, even among religious “nones” who supported Sanders over Clinton, nearly nine-in-ten (87%) say they would prefer Clinton over Trump if they had to make that choice today.

While many evangelical voters say they “strongly” support Trump over Clinton, this does not necessarily mean Trump is their ideal choice for president or that they are convinced he shares their religious convictions. In the current survey, 42% of white evangelicals say it will be difficult to choose between Trump and Clinton because neither one would make a good president. And a January Pew Research Center poll found that 44% of white evangelical Republicans view Trump as “not too” or “not at all” religious.

Evangelicals also overwhelmingly prefer Trump to Clinton when it comes to handling a wide variety of specific issues, from gun policy to the economy, terrorism, immigration and abortion. 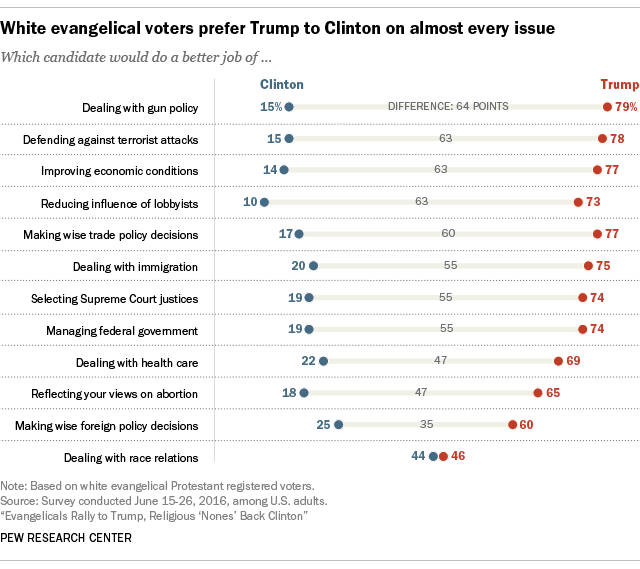 At the same time, the survey also shows that evangelicals’ support for Trump is driven at least as much by opposition to Clinton as it is by confidence in Trump. Indeed, white evangelicals who say they would choose Trump mainly as a vote against Clinton outnumber those who say their choice is mainly one for Trump by a 45% to 30% margin. 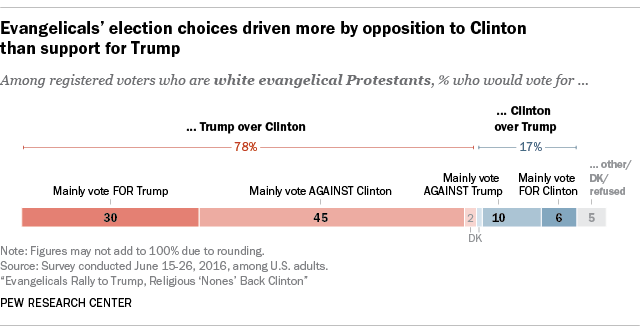 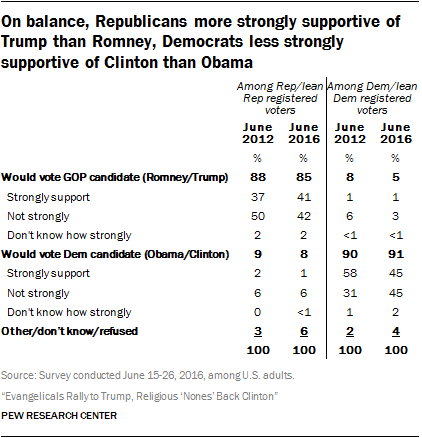 The strong support for Trump seen among white evangelical voters and the weaker support (relative to 2012) for Clinton among religious “nones” reflect broader trends among Republicans and Democrats. On balance, Republican voters as a whole support Trump somewhat more strongly than they did Romney at a similar point in the 2012 campaign, while Democrats’ support for Clinton is more lukewarm than it was for Obama in 2012. Despite these shifts, however, among registered voters overall, the survey finds that in a two-way contest between Clinton and Trump, Clinton leads by a 51% to 42% margin.

The survey also shows that large numbers of both Clinton and Trump supporters view their choice as more of a vote against the opposition candidate rather than an expression of support for their candidate. Furthermore, overall satisfaction with the choice of candidates is at its lowest point since 1992, with roughly four-in-ten voters (41%) saying the choice between Clinton and Trump is a tough one because neither would make a good president.

The latest survey by the Pew Research Center was conducted on cellphones and landlines from June 15-26 among 2,245 adults, including 1,655 registered voters. The survey’s overall findings about the state of the 2016 presidential race were previously released in the Pew Research Center’s July 7 report “2016 Campaign: Strong Interest, Widespread Dissatisfaction.” This new report provides a detailed look at the religious dynamics of the 2016 campaign, and it also includes new data on views about religion’s role in American public life. 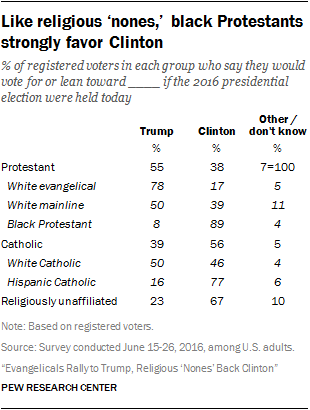 With 1,655 interviews among registered voters, the new survey makes it possible to examine the current political preferences of members of the nation’s largest religious groups.4

The survey also shows that a declining share of Americans say they want a president with firm religious convictions. Today, just 62% of U.S. adults say it is important to them that the president have strong religious beliefs, down from 67% in 2012 and 72% in 2008. This change may partly reflect a coming to terms on the part of Republicans who have nominated a presidential candidate who is widely viewed as not particularly religious. Indeed, the share of Republicans who say it is important to have a president who has strong religious beliefs has ticked down 4 percentage points since the 2012 campaign.

But this decline among Republicans predates the nomination of Trump, having dropped 8 percentage points since 2008. And it mirrors changes among Democrats as well; while a larger share of Republicans (74%) than Democrats (53%) say it is important that a president have strong religious beliefs, declining shares of both groups hold this view. 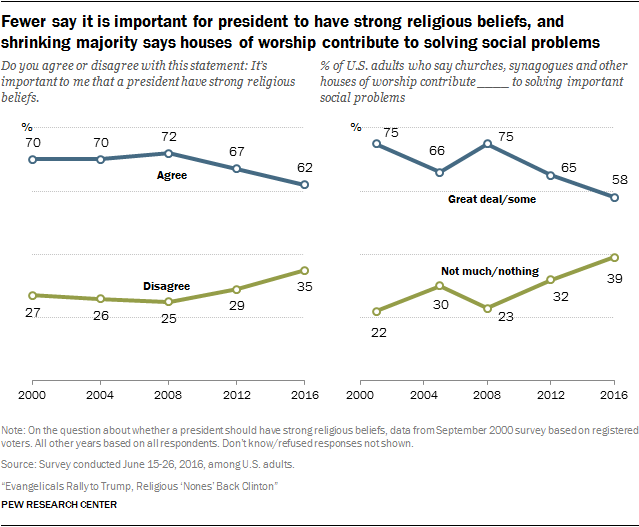 This shift also reflects changes in the religious composition of the country. Compared with those who identify with a religion, the religiously unaffiliated segment of the population is both less desirous of a pious president and growing very rapidly. The growth of the religious “nones” also has contributed to a decline in the share of Americans who say they think churches and other houses of worship contribute significantly to solving important social problems.

Far fewer “nones” (38%) than Protestants (65%) or Catholics (63%) say churches and other houses of worship contribute “a great deal” or “some” to solving important social problems. Nonetheless, all of these groups have seen declines in the shares who hold this view in recent years.

Next: 1. Religion and the 2016 campaign
← Prev Page
You are reading page1Page2Page3Page4Page5
Next Page →