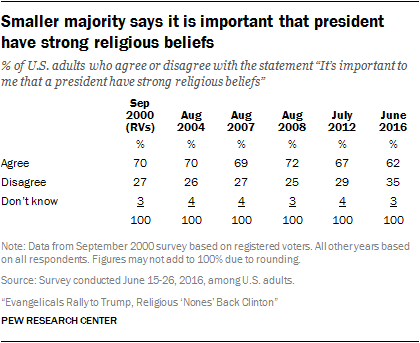 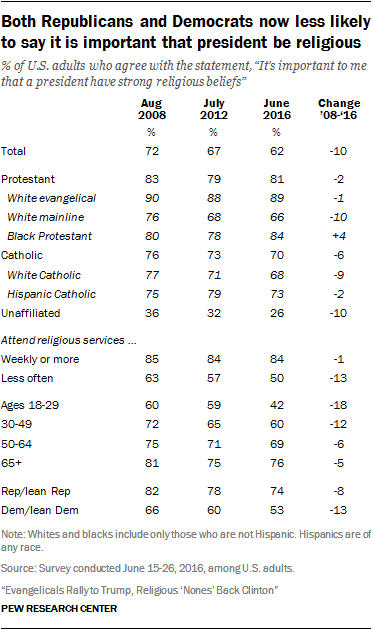 Republicans and those who lean toward the GOP remain more likely than Democrats and those who lean Democratic to say it is important for the president to have strong religious beliefs. But this view is waning among both groups. The data suggest, furthermore, that changing Republican views are not merely a response to their party’s selection of a candidate who is widely viewed as not particularly religious. Nearly half of Republicans and those who lean toward the GOP described Trump as “not too” or “not at all” religious in a January poll, but the share of Republicans who say the president should have strong religious beliefs had already begun to tick downward between 2008 and 2012.

Among religious groups, white evangelicals and black Protestants remain most committed to the idea that the president should have strong religious beliefs. At the other end of the spectrum, the growing segment of religious “nones” are, not surprisingly, least inclined to say they want a president who is strongly religious.

Fewer than half of young adults – those ages 18 to 29 – say they want a president who has strong religious beliefs, which is far less than the share of older adults who express this view. But they are not the only age group becoming less likely to desire a religious president over time. For example, in 2008, 72% of Americans ages 30-49 said it was important to have a religious president, compared with 60% among this age group today. 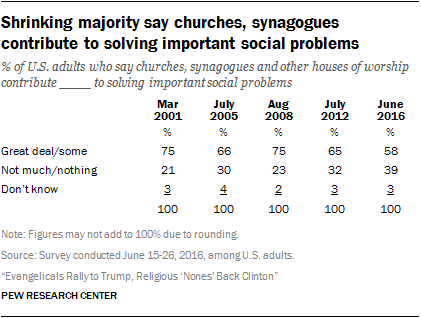 While most U.S. adults continue to say that churches, synagogues and other houses of worship contribute “a great deal” (19%) or “some” (38%) to solving important social problems, the share expressing this view has declined sharply in recent years, from 65% in 2012 and 75% as recently as 2008.

The decline in the view that churches and other houses of worship contribute to solving social problems is broad-based. White evangelicals remain among the most convinced that churches help solve social problems and religious “nones” remain least convinced this is the case. But both groups – and all other major religious groups – are less inclined to express this view today than in the recent past. Similarly, the survey shows that regular churchgoers and infrequent attenders, young adults and their older counterparts, and Republicans and Democrats have all become less convinced over the years that houses of worship play a major role in solving key social problems. 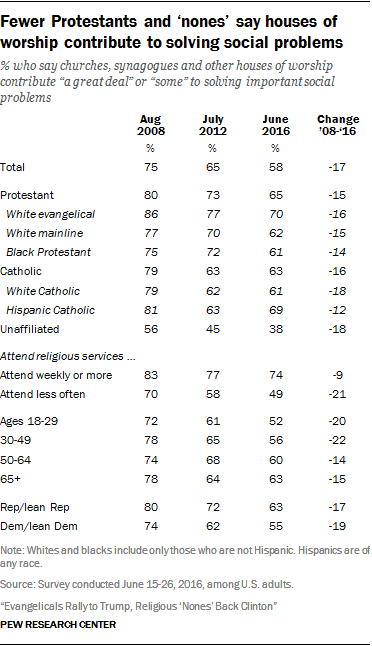 Many want churches to express views on social/political matters, but most oppose explicit candidate endorsements 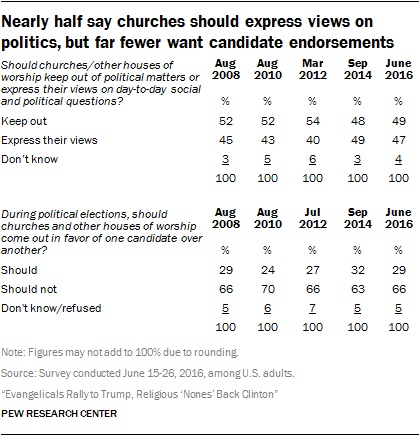 Nearly half of U.S. adults (47%) say churches and other houses of worship should express their views on social and political matters. But just 29% say churches should come out in favor of one candidate over another during elections. Views on both of these questions have been relatively stable in recent years. 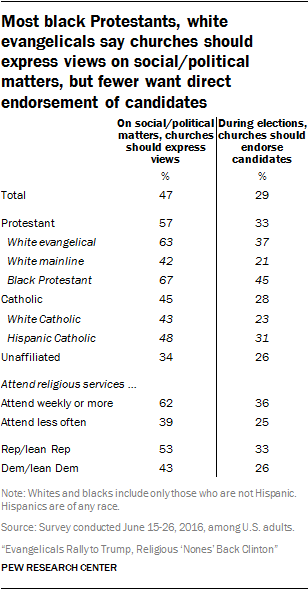 Roughly two-thirds of white evangelicals and black Protestants say churches should express their views on social and political matters, but just one-third of religious “nones” agree.

There is also a significant gap between regular churchgoers and others on this question. Six-in-ten Americans who attend religious services at least weekly think houses of worship should express their views on social and political topics, but just four-in-ten of those who attend religious services less often express this view. The data also show that Republicans and those who lean toward the GOP are more likely than Democrats to favor churches speaking out about politics.

There is also variation among religious and political groups in attitudes about whether churches should explicitly endorse political candidates. But the balance of opinion in nearly all major religious groups and in both political parties leans in the same direction on this question – against church endorsements of candidates. 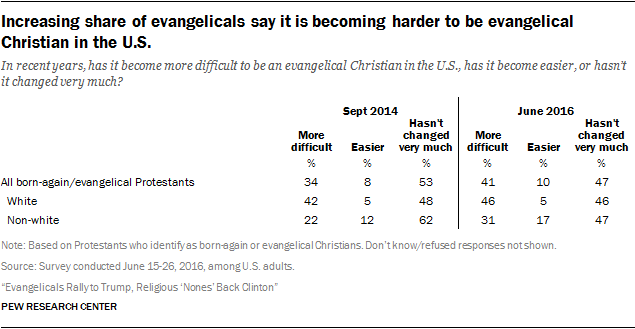 Compared with evangelicals, far fewer Catholics (18%) and religious “nones” (7%) believe things have become more difficult for their own groups in U.S. society. Indeed, among religious “nones,” there are about four times as many people who say it has become easier to be a nonreligious person in the U.S. (29%) as there are who say it has become more difficult (7%). 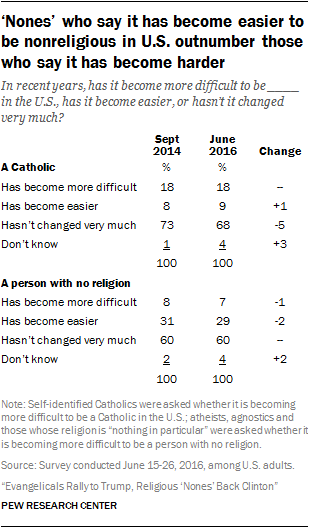 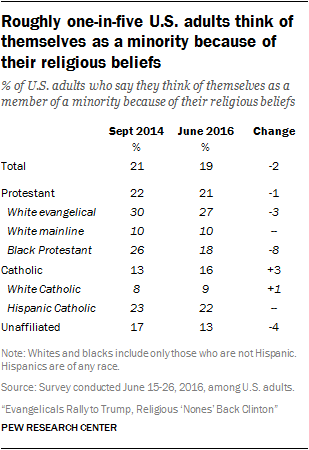 Overall, about one-in-five U.S. adults (19%) consider themselves to be a minority because of their religious beliefs, little changed from the 21% of Americans who said the same in 2014.

Only 13% of religious “nones” say they think of themselves as a minority based on their religious beliefs.

There were not enough interviews with Jews, Muslims, Buddhists, Hindus and members of other religious groups to analyze their responses separately.

Evangelicals Rally to Trump, Religious ‘Nones’ Back Clinton 1. Religion and the 2016 campaign
2. Religion in public life
Declining share says it is important for president to have strong religious beliefsFewer now say houses of worship key in solving social problemsMany want churches to express views on social/political matters, but most oppose explicit candidate endorsementsAbout four-in-ten evangelicals say it has become more difficult to be an evangelical Christian in recent years
Acknowledgments Methodology