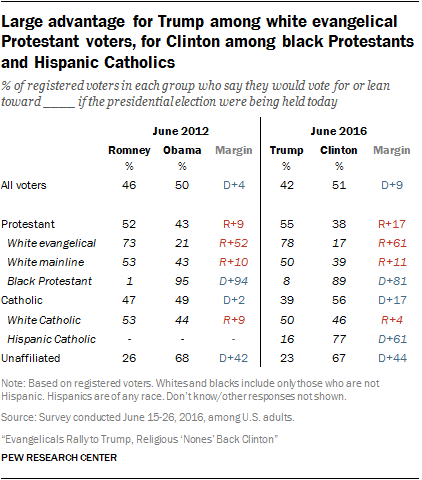 For the most part, the voting intentions of people in major religious groups closely resemble those seen in polling conducted at a similar point in the 2012 campaign. Roughly eight-in-ten white evangelical Protestant voters (78%) say they would support Trump if the election were held today, just as 73% indicated they would vote for Romney in June 2012. And Trump enjoys about the same level of support among white mainline Protestant voters as Romney did four years ago.

At the other end of the spectrum, roughly nine-in-ten black Protestants who are registered to vote say they would vote for Clinton if the election were held today (89%), as would two-thirds of those with no religious affiliation.

Currently, Clinton also holds a 17-point advantage among Catholic registered voters, driven largely by overwhelming support for Clinton among Latino Catholics. By contrast, at a similar point in the 2012 campaign, Catholics were closely divided between support for Obama (49%) and Romney (47%). Exit polls conducted on Election Day in 2012 found that Catholics ultimately split their votes between Obama (50%) and Romney (48%). 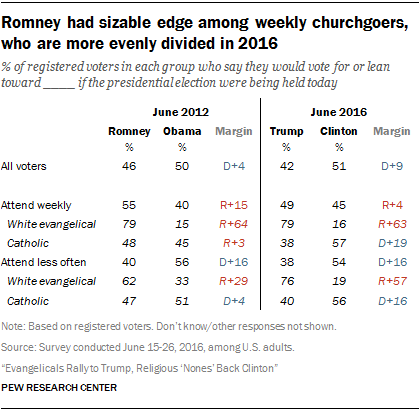 The survey finds a notable shift in the voting intentions of regular churchgoers. Currently, voters who say they attend religious services at least once a week are split almost evenly; 49% say they would vote for Trump and 45% say they would vote for Clinton. At a similar point in the 2012 campaign, Romney held a 15-point advantage among weekly churchgoers. And exit polls conducted on Election Day showed that Romney ultimately beat Obama by 20 points among voters who attend religious services weekly.

The shift in preferences among weekly churchgoers is driven largely by Catholics. Today, Clinton has a 19-point advantage among Catholic voters who say they attend Mass weekly, whereas Obama did not hold a lead at all among this group in June 2012.

White evangelicals who say they attend church at least weekly support Trump at about the same rate they supported Romney four years ago. (The survey included too few interviews with members of other religious groups to subdivide them by frequency of religious attendance.)

Clinton currently holds a 16-point edge among voters who say they attend religious services less than once a week, which is identical to the lead Obama held among this group at a similar point in 2012. But within this category, white evangelical voters appear to have swung even more strongly toward the GOP candidate since 2012 (76% now support Trump vs. 62% who supported Romney). Among Catholics who attend Mass less than once a week, 56% support Clinton today; 51% supported Obama in June 2012.

While the voting intentions of most religious groups resemble those seen in the last presidential campaign, there are some notable differences in the level of enthusiasm religious groups express about the current crop of candidates. On the Republican side, white evangelical Protestant voters are, if anything, more strongly supportive of Trump than they were of Romney at a similar point in the 2012 campaign. Today, 36% of white evangelicals describe themselves as strong Trump supporters, whereas just 26% described themselves as strong Romney supporters in June 2012. 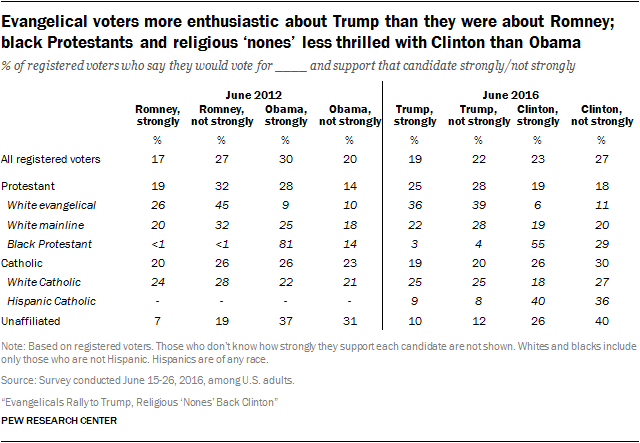 Across religious groups, many dissatisfied with candidates, but interest in campaign is up 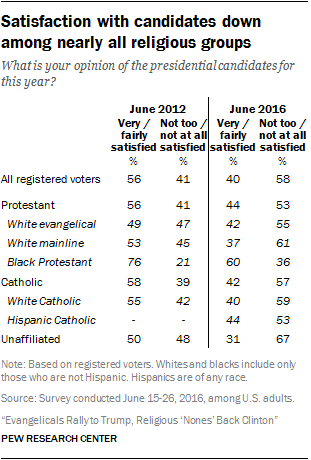 Across the board, members of nearly all major religious groups express less satisfaction with this year’s presidential candidates as compared with 2012. Fully two-thirds of religious “nones” say they are “not too” or “not at all” satisfied with the choice between Clinton and Trump, as do six-in-ten white mainline Protestants (61%) and white Catholics (59%). In 2012, by contrast, half or more of these groups said they were “very” or “fairly” satisfied with that year’s presidential candidates. 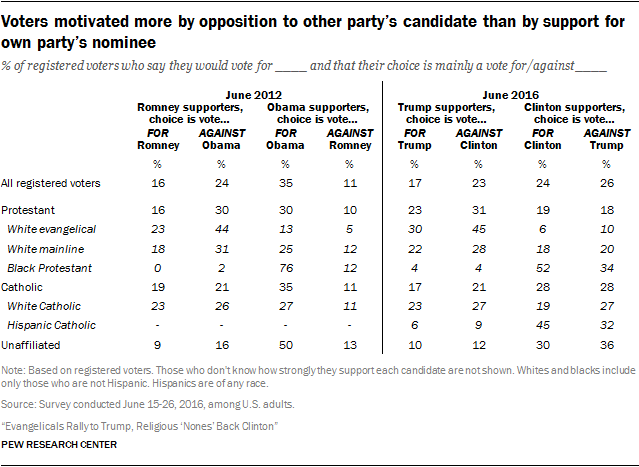 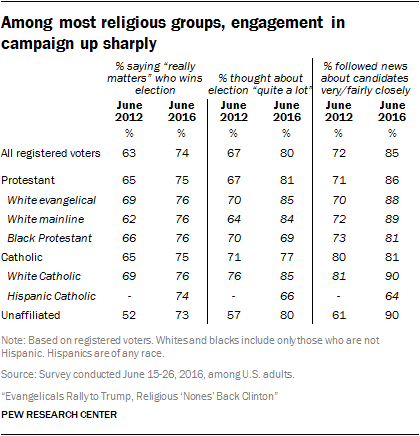 There is broad consensus across major religious groups about which issues are “very important” in deciding who to vote for in the presidential election (even if they may disagree about which candidate is best suited to handle these issues). There are, however, a few modest differences in the political priorities of the country’s major religious groups. White evangelical voters, for instance, are more likely than white mainline Protestants and religious “nones” to say that immigration or abortion will be “very important” in deciding who to vote for in this year’s presidential election. The environment is of more concern to Catholics and religiously unaffiliated voters than it is to white evangelicals. And the treatment of racial and ethnic minorities is a higher priority for religious “nones” than it is for other groups.5 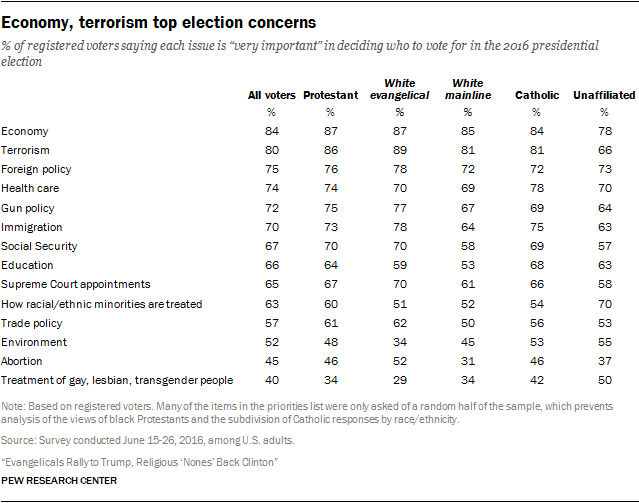 Next: 2. Religion in public life
← Prev Page
Page1You are reading page2Page3Page4Page5
Next Page →