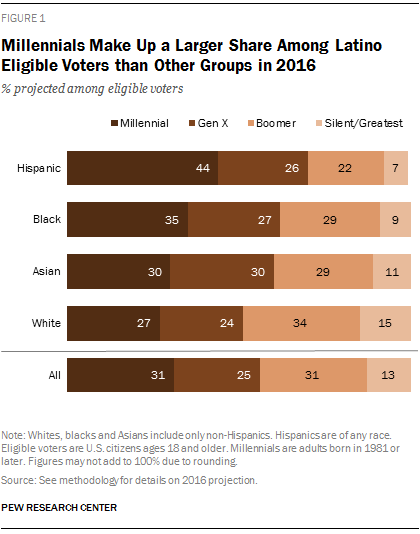 Hispanic millennials will account for nearly half (44%) of the record 27.3 million Hispanic eligible voters projected for 2016—a share greater than any other racial or ethnic group of voters, according to a new Pew Research Center analysis of U.S. Census Bureau data.

The large footprint of Latino millennial eligible voters reflects the oversized importance of youth in the U.S.-born Latino population and as a source of Latino eligible voter growth. The median age among the nation’s 35 million U.S.-born Latinos is only 19 (Stepler and Brown, 2015), and Latino youth will be the main driver of growth among Latino eligible voters over the next two decades. Between 2012 and 2016, about 3.2 million young U.S.-citizen Latinos will have advanced to adulthood and become eligible to vote, according to Pew Research Center projections. Nearly all of them are U.S. born—on an annual basis, some 803,000 U.S.-born Latinos reached adulthood in recent years.

This is by far the largest source of growth for the Hispanic electorate, but it is not the only one. The second-largest source is adult Hispanic immigrants who are in the U.S. legally and decide to become U.S. citizens (i.e., naturalize). Between 2012 and 2016 some 1.2 million will have done so, according to Pew Research Center projections. Another source is the outmigration from Puerto Rico. Since 2012, some 130,000 more Puerto Ricans have left the island than moved there. Florida has been the biggest recipient of these Puerto Rican adult migrants—all of whom are U.S. citizens and eligible to vote in U.S. elections (Krogstad, 2015c). 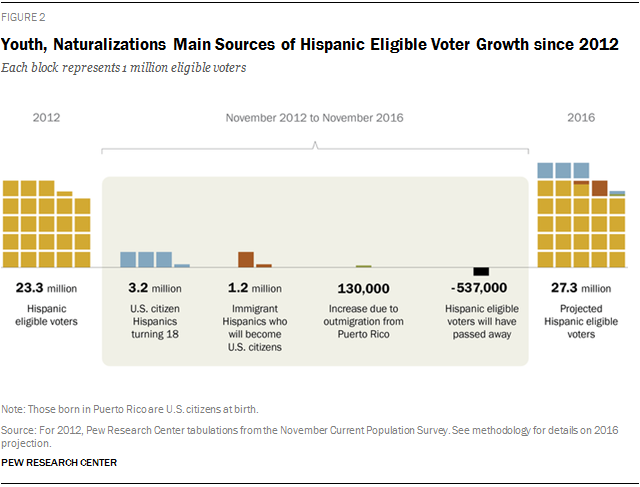 The coming of age of young U.S. citizens is also the principal source of growth for white and black eligible voter populations. In the case of whites, some 9.2 million U.S. citizens will turn 18 between 2012 and 2016. Among blacks, 2.3 million young people will have turned 18.

Another stable element of the Hispanic electorate has been immigrants. As with youth, the share of immigrants among Hispanic eligible voters has remained steady since 2000 at about one-quarter, even as the number of Hispanic immigrant eligible voters is projected to double, from 3.3 million in 2000 to a projected 6.6 million in 2016. This is in contrast to the trend in the foreign-born share among all Hispanics, which has been in decline since 2000 (Krogstad and Lopez, 2014a), falling from 40% then to 35% in 2013 (López and Patten, 2015).

Hispanic Electorate Is Growing, but 2016 Impact May Be Limited

The Latino electorate, which has leaned toward the Democratic Party in presidential elections for decades (Lopez and Taylor, 2012), is one of the nation’s most demographically dynamic groups, with a fast-growing population that is increasingly college-educated. Its potential influence in some of the nation’s key 2016 battleground states has also grown as the Latino population has become more dispersed nationally and increased in number in some key states.

With this rapid growth, the Latino electorate is projected to make up a record 11.9% of all U.S. eligible voters in 2016 and will pull nearly even with blacks, who will make up 12.4%. As a result, the Latino vote may be poised to have a large impact on the 2016 presidential election. Yet, for many reasons, Latino voters are likely to once again be underrepresented among voters in 2016 compared with their share of eligible voters or their share of the national population. 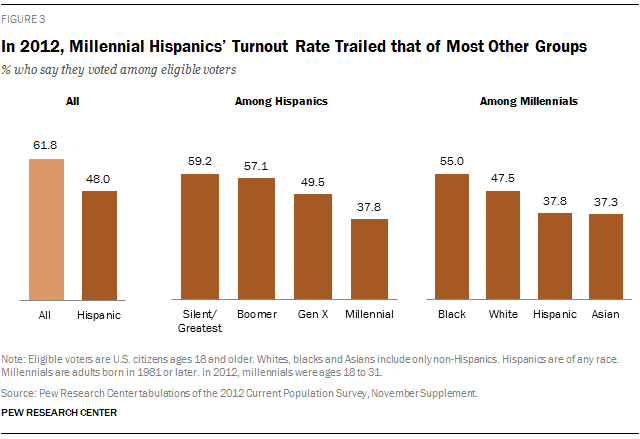 First, voter turnout rates for Hispanics have been significantly below those of other groups. In 2012, fewer than half (48%) of Hispanic eligible voters cast a ballot (Lopez and Gonzalez-Barrera, 2013). By comparison, 64.1% of whites and 66.6% of blacks voted. (Asians, at 46.9%, had a turnout rate similar to that of Hispanics.) At the same time, due to the group’s fast-growing population, the absolute number of Hispanic voters has reached record highs despite a decline in voter turnout between the 2008 and 2012 presidential elections. In 2012, a record 11.2 million Hispanics voted (Lopez and Gonzalez-Barrera, 2013), up from what was a record 9.7 million in 2008 (Lopez and Taylor, 2009). It is possible that a record number of Hispanics could vote in 2016, continuing a pattern of record turnout in presidential elections. 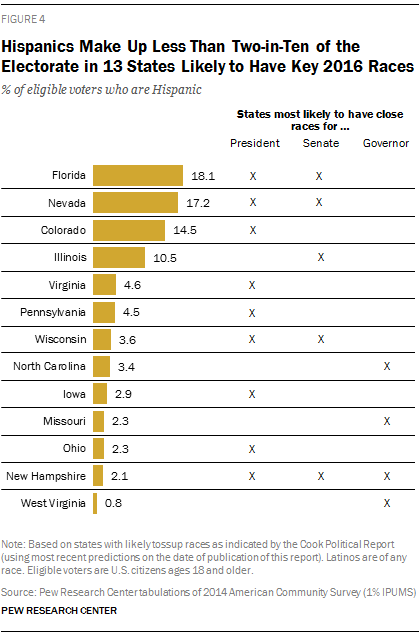 A third reason that Latinos may not vote in large numbers relative to their population in the 2016 elections is that few states with large Hispanic populations are likely to be key battlegrounds. In presidential elections, candidates often focus their outreach efforts in these states, raising the chances that a voter may be contacted and possibly turn out to vote. For example, the Latino-rich states of California, Texas and New York are not likely to be presidential tossup states. Together, these three account for 52% of all Latino eligible voters in 2016.

Finally, Latinos tend to “punch below their weight” in elections because more than half (52%) of the national Latino population is either too young to vote or does not hold U.S. citizenship. By comparison, just 20% of the nation’s white population is not eligible to vote for the same reasons, as is 28% of the black population and 44% of the Asian population.

The Silent and Greatest generations
Born: 1945 or earlier
Age in 2016: 71 or older
Note: No chronological end point has been set for the millennial generation.

This report explores ways in which the Latino electorate is changing. It also provides a look back at the 2014 midterm election, analyzing record low Latino—and non-Latino—voter turnout rates then.

The data for this report are largely derived from the U.S. Census Bureau’s Current Population Survey (CPS). The CPS is a monthly survey of about 55,000 households conducted by the Census Bureau for the Bureau of Labor Statistics. Estimating voter turnout rates with the Current Population Survey November Supplement can be challenging because it often differs from official voting statistics based on administrative voting records.

Accompanying this report are state profiles of Hispanic eligible voters in 42 states and the District of Columbia, each based on data from the 2014 American Community Survey. Also accompanying the report are interactive maps and tables showing key characteristics of Latino voters in all 50 states and the District of Columbia, as well as in each of the nation’s 435 congressional districts.

The terms “whites,” “blacks” and “Asians” are used to refer to single-race, non-Hispanic
components of their populations.

“U.S. born” refers to persons born in the United States, Puerto Rico or other U.S. territories and
those born in other countries to parents at least one of whom was a U.S. citizen.

“Foreign born” refers to persons born outside of the United States, Puerto Rico or other U.S.
territories to parents who were not U.S. citizens.

Next: 1. Looking Forward to 2016: The Changing Latino Electorate
← Prev Page
You are reading page1Page2Page3Page4Page5Page6Page7Page8
Next Page →