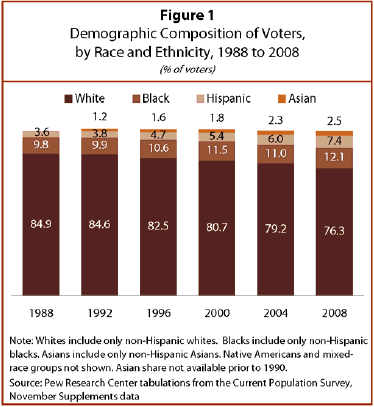 The electorate in last year’s presidential election was the most racially and ethnically diverse in U.S. history, with nearly one-in-four votes cast by non-whites, according to a new analysis of Census Bureau data by the Pew Research Center.1 The nation’s three biggest minority groups—blacks, Hispanics and Asians—each accounted for unprecedented shares of the presidential vote in 2008.

The unprecedented diversity of the electorate last year was driven by increases both in the number and in the turnout rates of minority eligible voters. 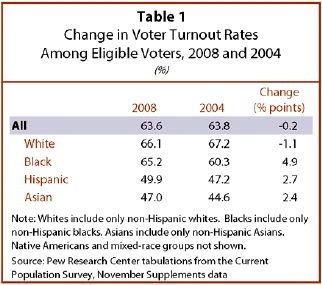 Much of the surge in black voter participation in 2008 was driven by increased participation among black women and younger voters. The voter turnout rate among eligible black female voters increased 5.1 percentage points, from 63.7% in 2004 to 68.8% in 2008. Overall, among all racial, ethnic and gender groups, black women had the highest voter turnout rate in November’s election—a first.

Blacks ages 18 to 29 increased their voter turnout rate by 8.7 percentage points, from 49.5% in 2004 to 58.2% in 2008, according to an analysis by the Center for Information and Research on Civic Learning and Engagement (CIRCLE) at Tufts University. The voter turnout rate among young black eligible voters was higher than that of young eligible voters of any other racial and ethnic group in 2008. This, too, was a first (Kirby and Kawashima-Ginsberg, 2009).

Population Definitions Based on the Current Population Survey, November Supplement

Voting Age Population: The population of persons ages 18 and older.

Registered Voter Population: Persons who say they were registered to vote in their state in the 2008

Voter Population or Voter Turnout: Persons who say they voted in the November 2008 election.

Voter Turnout Rate: Share of the voting eligible population who say they voted. 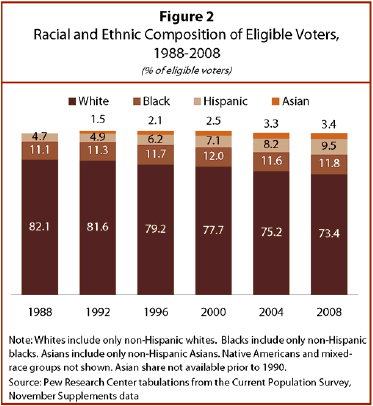 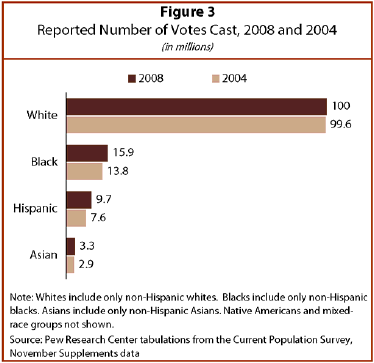 The Pew Research Center analysis of Census Bureau data also finds a distinct regional pattern in the state-by-state increases in turnout. From 2004 to 2008, the greatest increases were in Southern states with large black eligible voter populations: Mississippi (where the voter turnout rate was up 8 percentage points), Georgia (7.5 points), North Carolina (6.1 points) and Louisiana (6.0 points). It also increased in the District of Columbia (6.9 points).5

According to the exit polls in last year’s presidential election, the candidate preference of non-white voters was distinctly different from that of white voters. Nearly all (95%) black voters cast their ballot for Democrat Barack Obama. Among Latino voters, 67% voted for Obama while 31% voted for Republican John McCain. Among Asian voters, 62% supported Obama and 35% voted for McCain. In contrast, white voters supported McCain (55%) over Obama (43%).

This report summarizes the participation of voters in the 2008 presidential election and follows reports from the Pew Hispanic Center, a project of the Pew Research Center, on the Latino vote (Lopez and Livingston, 2009; Lopez, 2008; Taylor and Fry, 2007) and Latino public opinion about the election and the candidates (Lopez and Minushkin, 2008).

The data for this report are derived from the November Voting and Registration Supplement of the Current Population Survey (CPS). The CPS is a monthly survey of about 55,000 households conducted by the Census Bureau for the Bureau of Labor Statistics. The November Voting and Registration Supplement is one of the richest sources available of information about the characteristics of voters. It is conducted after Election Day and relies on survey respondent self-reports of voting and voter registration.

The Census Bureau’s biannual Current Population Survey November Voting and Registration Supplement is the most comprehensive data source available for examining the demographic composition of the electorate in federal elections. However, because it relies on post-election self-reporting by survey respondents in some 55,000 households, these weighted CPS estimates of turnout never match up precisely with the actual number of votes tallied in the 50 states. According to the CPS, an estimated 131.1 million U.S. citizens voted in the 2008 presidential election – slightly less than the 131.3 million votes cast for president, as reported by the Center for the Study of the American Electorate (Gans, 2008) and other sources (McDonald, 2009).

This is the first time since the Census Bureau began taking a post-election survey in 1964 that its estimate is smaller than the number of votes tallied by the states. Prior to 2008, the gap had always run in the opposite direction, with variances ranging between a low of 2.8% (in 2004) and a high of 11.6% (in 1988). Since the 1996 presidential election, the gap has narrowed steadily, and in 2008, the lines crossed for the first time.

Election experts and scholars who have examined this gap over the years have theorized that it stems, at least in part, from a tendency of some Census Bureau survey respondents to report that they had voted even if they had not (Bernstein, Chadha and Montjoy, 2001). Another possible explanation is that in every election, some small portion of ballots are improperly cast and do not become a part of the official count—but the voters who cast such ballots report to the Census Bureau that they had voted.

There is no consensus among experts to explain the recent convergence in the number of votes tallied by the states and those reported by the Census Bureau. One possibility is that there has been a decline in spoiled, uncounted ballots in recent elections. Another possibility is that there has been an increase in voting by U.S. citizens living abroad – a group that is not included in the CPS survey (McDonald, 2009). A third possible explanation is that the accuracy of the CPS itself may have improved. 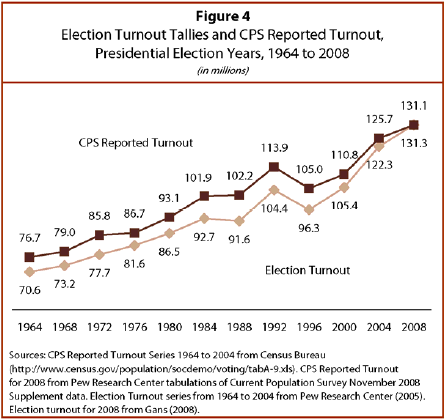 This report summarizes the participation and characteristics of voters in the 2008 presidential election. The data for this report are derived from the November Voting and Registration Supplement of the Current Population Survey. The CPS is a monthly survey of about 55,000 households conducted by the Census Bureau for the Bureau of Labor Statistics and the Census Bureau. The November Voting and Registration Supplement is one of the richest sources of information about the characteristics of voters available. It is conducted after Election Day and relies on survey respondent self-reports of voting and voter registration.

The terms “Latino” and “Hispanic” are used interchangeably in this report. The terms “whites,” “blacks” and “Asians” are used to refer to the non-Hispanic components of their population.

Next: II. Growing Diversity Among Eligible Voters
← Prev Page
You are reading page1Page2Page3Page4Page5
Next Page →

Naturalized Citizens Make Up Record One-in-Ten U.S. Eligible Voters in 2020
Millennials Make Up Almost Half of Latino Eligible Voters in 2016
A Record 24 Million Latinos Are Eligible to Vote, But Turnout Rate Has Lagged That of Whites, Blacks
Inside the 2012 Latino Electorate
An Awakened Giant: The Hispanic Electorate is Likely to Double by 2030
Defining generations: Where Millennials end and Generation Z begins
Growing Share of Americans Say They Plan To Get a COVID-19 Vaccine – or Already Have
Quiz: Are you a Core Conservative? A Solid Liberal? Or somewhere in between?
Most Americans Support Tough Stance Toward China on Human Rights, Economic Issues
In their own words: What Americans think about China