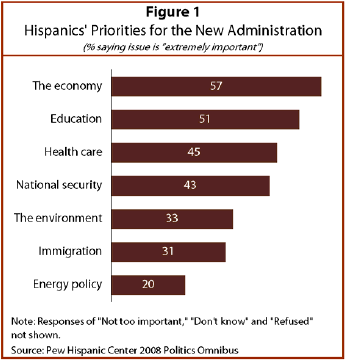 A year and a half after a lengthy, often rancorous debate over immigration reform filled the chambers of a stalemated Congress, the issue appears to have receded in importance among one of the groups most affected by it—Latinos.

Only three-in-ten (31%) Latinos rate immigration as an “extremely important” issue facing the incoming Obama administration, placing it sixth on a list of seven policy priorities that respondents were asked to assess in a nationwide survey of 1,007 Latino adults conducted from December 3 to December 10, 2008 by the Pew Hispanic Center, a project of the Pew Research Center.

The top-rated issue among Latinos is the economy; 57% of Hispanics say it is an extremely important one for the new president to address. Education, health care, national security and the environment all also rate higher than immigration as a policy priority among Hispanics, while energy policy ranks lower.

Latinos, who make up 15% of the U.S. population, are by far the nation’s biggest immigrant group. According to Pew Hispanic Center tabulations of the 2006 American Community Survey, more than half (55%) of Latinos ages 18 and older are immigrants, and 47% of all immigrants ages 18 and older are Hispanic. Even at the apex of the congressional debate over immigration reform in 2007, however, the issue never rose to the top of Latinos’ priority list. Of six issues asked of Latinos in a 2007 Pew Hispanic Center survey, it ranked fifth. But back then, 38% of Hispanics judged immigration to be an extremely important issue—more than the 31% who say the same thing in the new survey.

Moreover, in an open-ended question on this latest survey, just 6% of Latino respondents who voted in the 2008 election cited immigration as the issue that mattered most to them as they went to the polls. Five times as many named the economy (31%). Higher shares also named candidate attributes (14%) and a general desire for change (13%). In last year’s presidential election, Latino voters supported Democrats Barack Obama and Joe Biden over Republicans John McCain and Sarah Palin by more than two-to-one—67% to 31% (Lopez 2008).1 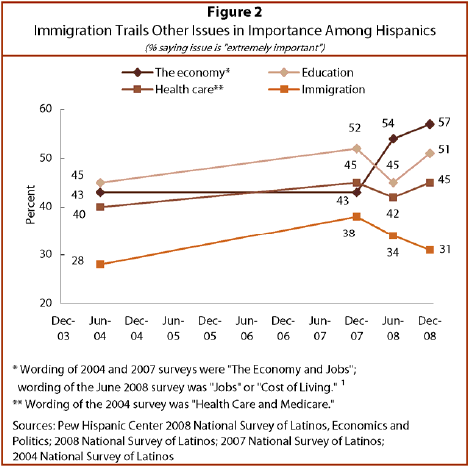 The latest Pew Hispanic Center survey also explored attitudes among Latinos about the incoming Obama administration and the outgoing Bush administration, and it examined a range of political activities that Latinos engaged in during the historic 2008 presidential campaign. Among its other key findings:

This report utilizes results from two national surveys of Hispanic adults. First, the 2008 National Survey of Latinos, Economics and Politics, examines Hispanic adults’ views of the 2008 election and their participation in political activities in the 2008 election. The survey was conducted from November 11 through November 30, 2008, among a randomly selected, nationally representative sample of 1,540 Hispanic adults. The survey was conducted in both English and Spanish. The margin of error for the full sample is plus or minus 3.0 percentage points at the 95% confidence level.

The second survey, the Pew Hispanic Center 2008 Politics Omnibus, was conducted among a nationally representative sample of 1,007 Latino respondents ages 18 and older, from December 3 through December 10, 2008. The survey was conducted in both English and Spanish. The margin of error for total respondents is plus or minus 4.5 percentage points at the 95% confidence level. For a full description of the methodology for both surveys, see Appendix A.

The terms “general population” and “general public” are used interchangeably in this report to refer to the entire U.S. adult population, including Hispanics.

Next: II. Looking Forward: The Obama Administration
← Prev Page
You are reading page1Page2Page3Page4Page5
Next Page →

On the Cusp of Adulthood and Facing an Uncertain Future: What We Know About Gen Z So Far
America’s Image Abroad Rebounds With Transition From Trump to Biden
Experts Doubt Ethical AI Design Will Be Broadly Adopted as the Norm Within the Next Decade
What the data says about gun deaths in the U.S.
Unlike other U.S. religious groups, most atheists and agnostics oppose the death penalty