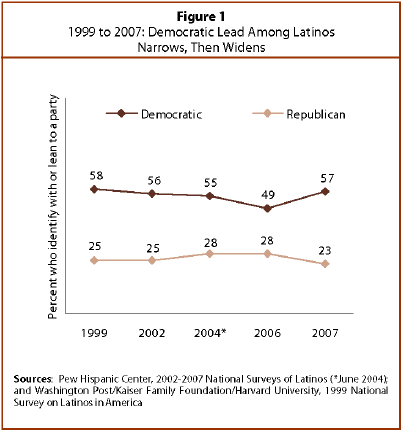 After spending the first part of this decade loosening their historic ties to the Democratic Party, Hispanic voters have reversed course in the past year, a new nationwide survey of Latinos by the Pew Hispanic Center has found.

Some 57% of Hispanic registered voters now call themselves Democrats or say they lean to the Democratic Party, while just 23% align with the Republican Party – meaning there is now a 34 percentage point gap in partisan affiliation among registered Latinos. In July, 2006, the same gap was just 21 percentage points – whereas back in 1999, it had been 33 percentage points.

This U-turn in Hispanic partisan allegiance trends comes at a time when the issue of illegal immigration has become an intense focus of national attention and debate – on the presidential campaign trail; in the corridors of federal, state and local governments; and on cable television and talk radio.

The new survey finds that a plurality of Hispanics view the Democratic Party rather than the Republican Party as the one that shows more concern for Latinos and does a better job on the issue of illegal immigration (although a substantial minority of Latinos see no difference between the parties on these matters). Also, many more Latinos (41%) say the policies of the Bush Administration have been harmful to Latinos than say they have been helpful (16%).

Hispanics are the nation’s largest and fastest growing minority group; at 46 million strong, they make up about 15% of the U.S. population. Their electoral clout continues to be undercut, however, by the fact that many are ineligible to vote, either because they are not citizens or not yet 18 years old. In 2008, Latinos will comprise about 9% of the eligible electorate nationwide. If past turnout trends persist, they will make up only about 6.5% of those who actually turn out to vote next November.

But despite these modest numbers, Hispanics loom as a potential “swing vote” in next year’s presidential race. That’s because they are strategically located on the 2008 Electoral College map. Hispanics constitute a sizable share of the electorate in four of the six states that President Bush carried by margins of five percentage points or fewer in 2004 –New Mexico (where Hispanics make up 37% of state’s eligible electorate); Florida (14%); Nevada (12%) and Colorado (12%). All four are expected to be closely contested once again in 2008.

Bush drew an estimated 40% of the national Latino vote in 2004 — a record for a Republican presidential candidate.1 As the 2008 campaign begins, most of his would-be successors in the Republican Party have staked out hard-line positions on illegal immigration, triggering concerns among some Republican commentators (e.g, Gerson, 2007) about a potential anti-GOP backlash by Latinos at the polls next year. There is a long way to go until the 2008 election, but the Pew survey of Latinos finds a number of potentially worrisome early signs for the GOP on this front. In addition to the already-noted decline in GOP affiliation among Hispanics, the survey finds:

The survey also asked about preferences in the Democratic and Republican nomination contests. It found:

Polling results on Hispanic political views are based on Hispanic registered citizens in the 2007 National Survey of Latinos. The survey was conducted among a nationally representative sample of 2,003 Hispanic adults from Oct 3 to Nov 9, 2007. The state-by-state electoral analysis uses demographic data and official vote counts to assess the importance of the Latino electorate.

Next: II. Survey of Latino Political Attitudes
← Prev Page
You are reading page1Page2Page3Page4
Next Page →