After four decades of rapid growth (Brown, 2014), the number of Latino immigrants in the U.S. reached a record 18.8 million in 2010, but has since stalled, according to a Pew Research Center analysis of U.S. Census Bureau data.1 Since 2000, the U.S.-born Latino population continued to grow at a faster rate than the immigrant population. As a result, the foreign-born share of Latinos is now in decline.

The slowdown in growth of the Hispanic foreign-born population coincides with a decline in Mexican migration to the U.S. Today, about as many people from Mexico are leaving the U.S. as entering, after four decades of explosive growth (Passel, Cohn and Gonzalez-Barrera, 2012). Many factors have played a role in this trend, including the U.S. economic downturn, stepped-up border enforcement, growing dangers associated with illegal border crossings and demographic and economic changes in Mexico.2

Even as the share of Latino immigrants decreases, rapid growth in the number of Latino births means the Latino population will continue to grow at a steady clip. Latinos are the nation’s largest minority, and one of its fastest growing. Since 1970, the Latino population has increased sixfold, from 9.1 million to 53 million by 2012. It is projected to grow to 129 million by 2060, according to the latest projections from the U.S. Census Bureau (2012). Its share of the U.S. population, currently at 17%, is expected to reach 31% by 2060. 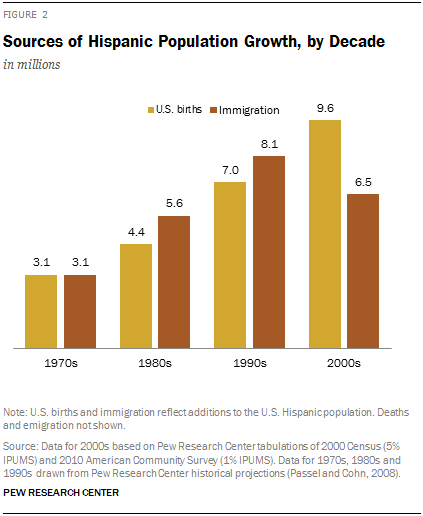 These opposing trends—the rise of U.S.-born and the slowdown in immigrant population growth—have begun to reshape the adult Hispanic population. Just as the slowdown in immigration has occurred, the number of U.S.-born Hispanics entering adulthood is beginning to accelerate. Today, some 800,000 young U.S.-born Hispanics enter adulthood each year, but in the coming decades, that number will rise to more than a million annually (Taylor, Gonzalez-Barrera, Passel and Lopez, 2012).

Accompanying this report is a statistical portrait of the nation’s Hispanic population and a statistical portrait of the nation’s foreign-born population. Both are based on the Census Bureau’s 2012 American Community Survey and feature detailed characteristics of each population at the national level, as well as state population totals. Topics covered include age, citizenship, origin, language proficiency, living arrangements, marital status, fertility, schooling, health insurance coverage, and employment.

Key findings from the statistical portrait of U.S. Hispanics include:

Spanish use at home and English proficiency

The terms “immigrant” and “foreign born” are used interchangeably in this report.

“U.S. born” or “native born” refers to persons who are U.S. citizens at birth, including those born in the United States, Puerto Rico or other U.S. territories and those born abroad to parents at least one of whom was a U.S. citizen.