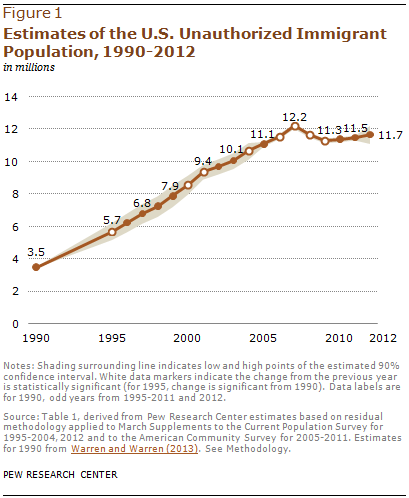 The sharp decline in the U.S. population of unauthorized immigrants that accompanied the 2007-2009 recession has bottomed out, and the number may be rising again. As of March 2012, 11.7 million unauthorized immigrants were living in the United States, according to a new preliminary Pew Research Center estimate based on U.S. government data.

The estimated number of unauthorized immigrants peaked at 12.2 million in 2007 and fell to 11.3 million in 2009, breaking a rising trend that had held for decades. Although there are indications the number of unauthorized immigrants may be rising, the 2012 population estimate is the midpoint of a wide range of possible values and in a statistical sense is no different from the 2009 estimate.

The new Pew Research estimates rely on the center’s residual methodology, in which legal immigration is subtracted from the adjusted total foreign-born population to arrive at a total for unauthorized immigrants. These estimates slightly revise previously published estimates for 2000-2011 (Passel and Cohn, 2012a) to account for new findings from the 2010 Census. This report also presents the initial, direct residual estimates that cover six individual states and aggregate the rest of the country; more detailed estimates for the remaining states and for characteristics of the unauthorized immigrant population are developed from these estimates and will be available in a later report.

These estimates also introduce a new data source for the Pew Research estimates—the U.S. Census Bureau’s American Community Survey (ACS) for 2005 to 2011, replacing the March Current Population Survey (CPS) for those years. The ACS has about 12 times more sample cases than the CPS and thus provides more precise estimates with smaller margins of error.

In analyzing recent year-to-year change, especially at the state level, this report focuses on 2005 to 2011 (especially 2007 to 2011) because the large sample size for ACS-based estimates permits more statistically sound statements about annual differences than was possible with the previously published estimates. The 2012 CPS-based estimates are derived from a much smaller sample, resulting in margins of error generally too large to draw conclusions about change from 2011 to 2012. These 2012 CPS estimates should be treated as preliminary because they will be replaced with ACS-based estimates when the 2012 ACS microdata become available later this year. (See Methodology for more details.)

Estimates presented here of the unauthorized immigrant population replace those previously published by the Pew Research Center for 2000 to 2011 (Passel and Cohn, 2012a). The figures for the foreign-born population used in these new estimates are drawn from two U.S. government surveys—the March Supplement to the Current Population Survey (CPS) and the American Community Survey (ACS). Those surveys are, in turn, tied to the Census Bureau’s estimates of the population during the survey period. At the time the surveys are released by the Census Bureau, they incorporate the most recent official population estimates.

After the release of 2010 Census results, the Census Bureau issued a set of new population estimates that incorporated updated information about population change over the previous decade. The same process took place after the 1990 and 2000 censuses. However, the Census Bureau generally does not return to previously released ACS, CPS or other survey data to incorporate updated information from these revised intercensal population estimates. 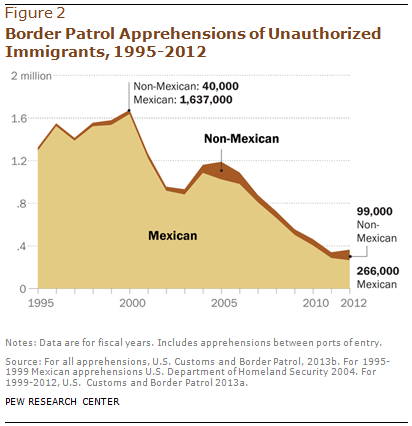 The Pew Research Center’s Hispanic Trends Project estimates the unauthorized immigrant population using a residual method, which is based on official government data. Under this methodology, a demographic estimate of the legal foreign-born population—naturalized citizens, legal permanent residents, temporary legal residents and refugees—is subtracted from the total foreign-born population as measured in a survey. The remainder, or residual, is the source of population estimates and characteristics of unauthorized immigrants.

The estimates use data from the Current Population Survey (CPS), conducted by the Bureau of Labor Statistics and the Census Bureau, and from the American Community Survey (ACS), conducted by the Census Bureau. The March Supplement to the CPS, a survey of about 80,000 households for 2001 and later versus about 50,000 households earlier, is the source of data for 1995-2004 and for 2012. The ACS, a compilation of monthly data including about 3 million households each year, is the source of data for 2005-2011. The Pew Research Center’s Hispanic Trends Project’s estimates make adjustments to the government data to compensate for undercounting, and therefore its population totals differ somewhat from the ones the government uses. Estimates for any given year are based on a March reference date for years from the CPS and a July 1 reference date for years from the ACS.

Accompanying this report are an interactive graphic and a slide show about overall unauthorized immigration trends.

The authors appreciate the guidance of Paul Taylor, executive vice president of the Pew Research Center, and of Mark Hugo Lopez, the center’s director of Hispanic research.

The “legal immigrant” population is defined as people granted legal permanent residence; those granted asylum; people admitted as refugees; and people admitted under a set of specific authorized temporary statuses for longer-term residence and work. This group includes “naturalized citizens,” legal immigrants who have become U.S. citizens through naturalization; “legal permanent resident aliens” who have been granted permission to stay indefinitely in the U.S. as permanent residents, asylees or refugees; and “legal temporary migrants” who are allowed to live and, in some cases, work in the U.S. for specific periods of time (usually longer than one year).

“Unauthorized immigrants” are all foreign-born non citizens residing in the country who are not “legal immigrants.” These definitions reflect standard and customary usage by the U.S. Department of Homeland Security and academic researchers. The vast majority of unauthorized immigrants entered the country without valid documents or arrived with valid visas but stayed past their visa expiration date or otherwise violated the terms of their admission. Some who entered as unauthorized immigrants or violated terms of admission have obtained work authorization by applying for adjustment to legal permanent status or by obtaining Temporary Protected Status (TPS). Data are very limited, but this “quasi-legal” group could account for as much as 10% of the unauthorized population. Many could also revert to unauthorized status.

“Removals” are the compulsory and confirmed movement of inadmissible or deportable aliens out of the United States based on an order of removal. An alien who is removed has administrative or criminal consequences placed on subsequent re-entry. The Department of Homeland Security uses the term “removal” rather than “deportation” to describe the actions of its Immigration and Customs Enforcement (ICE) and Customs and Border Protection (CBP) to expel foreign nationals from the country. “Deportations” are one type of removal and refer to the formal removal of a foreign citizen from the U.S. In addition, a foreign citizen may be expelled under an alternative action called an expedited removal. The Illegal Immigration Reform and Immigrant Responsibility Act of 1996 allows U.S. immigration authorities to issue an expedited order of removal and directly remove a foreign citizen without referral to an immigration judge under certain circumstances. Deportations and expedited removals together comprise removals reported by the Department of Homeland Security.

Next: 2. Number and Trend
← Prev Page
You are reading page1Page2Page3Page4Page5Page6Page7
Next Page →