Births have surpassed immigration as the main driver of the dynamic growth in the U.S. Hispanic population. This new trend is especially evident among the largest of all Hispanic groups-Mexican-Americans1, according to a new analysis of U.S. Census Bureau data by the Pew Hispanic Center, a project of the Pew Research Center. 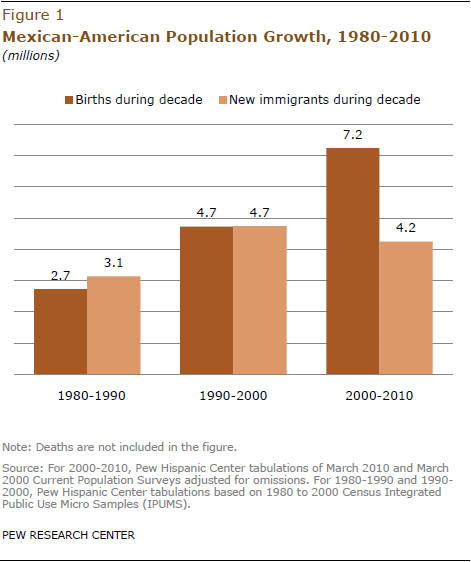 The current surge in births among Mexican-Americans is largely attributable to the immigration wave that has brought more than 10 million immigrants to the United States from Mexico since 1970. Between 2006 and 2010 alone, more than half (53%) of all Mexican-American births were to Mexican immigrant parents. As a group, these immigrants are more likely than U.S.-born Americans to be in their prime child-bearing years. They also have much higher fertility. 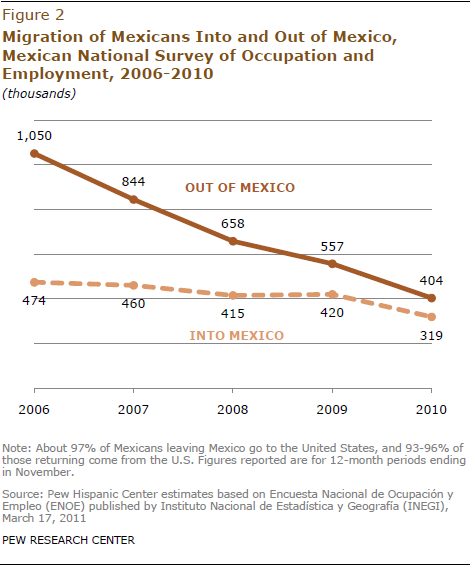 Meanwhile, the number of new immigrant arrivals from Mexico has fallen off steeply in recent years. According to a Pew Hispanic Center analysis of Mexican government data, the number of Mexicans annually leaving Mexico for the U.S. declined from more than one million in 2006 to 404,000 in 2010-a 60% reduction.2 This is likely a result of recent developments in both the U.S. and Mexico. On the U.S. side, declining job opportunities and increased border enforcement (Passel and Cohn, 2009) may have made the U.S. less attractive to potential Mexican immigrants. And in Mexico, recent strong economic growth may have reduced the “push” factors that often lead Mexicans to emigrate to the U.S.

At 31.8 million in 2010, Mexican-Americans comprise 63% of the U.S. Hispanic population and 10% of the total U.S. population (Ennis, Ríos-Vargas and Albert, 2011). According to Pew Hispanic Center tabulations from the March 2010 U.S. Current Population Survey, 39% of Mexican-Americans-or 12.4 million-are immigrants.4 With the exception of Russia, no other country in the world has as many immigrants from all countries as the U.S. has from Mexico alone.5 Nor does any country in the world have as many citizens living abroad as does Mexico. According to the World Bank, more than 10% of Mexico’s native-born population lives elsewhere, with the vast majority (97%) of these expatriates living in the United States.

Overall, the Hispanic population of the United States grew from 35.3 million in 2000 to 50.5 million in 2010, accounting for more than half of the nation’s overall population growth during that decade (Passel, Cohn and Lopez, 2011). Some 58% of this Hispanic population increase came from births rather than the arrival of new immigrants. However, for many non-Mexican-origin Hispanic groups in the U.S., births accounted for less than half of their population growth in the past decade. For example, from 2000 to 2010, births accounted for just 38% of the growth of the Cuban-American population and just 39% of the growth of the population of U.S. Hispanics of Central or South American origin.

Hispanics now comprise 16.3% of the total U.S. population. This share is projected to rise to 29% by the middle of this century, with the bulk of the future increase driven by births, many the descendents of today’s immigration wave, rather than the arrival of new immigrants. (Passel and Cohn, 2008).

Next: II. Mexican-American Fertility Patterns
← Prev Page
You are reading page1Page2Page3Page4Page5
Next Page →