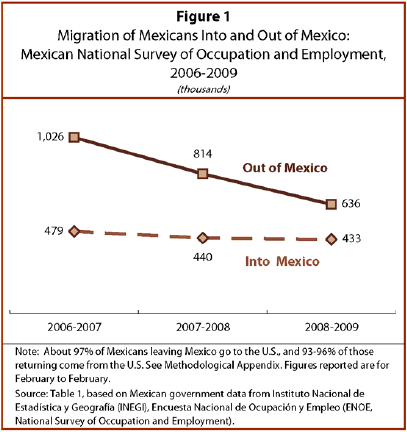 The flow of immigrants from Mexico to the United States has declined sharply since mid-decade, but there is no evidence of an increase during this period in the number of Mexican-born migrants returning home from the U.S., according to a new analysis by the Pew Hispanic Center of government data from both countries.

The current recession has had a harsh impact on employment of Latino immigrants, raising the question of whether an increased number of Mexican-born residents are choosing to return home. This new Hispanic Center analysis finds no support for that hypothesis in government data from the United States or Mexico.

Mexico is by far the leading country of origin for U.S. immigrants, accounting for a third (32%) of all foreign-born residents and two-thirds (66%) of Hispanic immigrants. The U.S. is the destination for nearly all people who leave Mexico, and about one-in-ten people born there currently lives in the U.S.

Patterns of migration between the U.S. and Mexico are varied. Many immigrants come from Mexico to settle permanently, but large numbers also move both ways across the U.S.-Mexico border throughout the year, sometimes staying for only a few months, a pattern known as circular migration. Mexican-U.S. migration also tends to be seasonal, with larger northbound flows in the spring and summer and larger southbound flows in the fall and winter.

This report examines whether the recent annual volume of movement between the U.S. and Mexico in either direction has gone up or down. It relies on major national population surveys from Mexico and the U.S., as well as on U.S. Border Patrol apprehension figures. No single source presents the full picture of migration flows between the two countries, but the three sources examined here point to similar conclusions.

Data from population surveys taken in the U.S. and Mexico indicate that in recent years there has been a large flow of migrants back to Mexico, but the size of the annual return flow appears to be stable since 2006. Mexico’s National Survey of Employment and Occupation estimates that 433,000 Mexican migrants returned home from February 2008 to February 2009. For the same period in 2007-2008, 440,000 did, compared with an estimated 479,000 from February 2006 to February 2007.

As for immigration to the U.S. from Mexico, data from several sources attest to recent substantial decreases in the number of new arrivals. 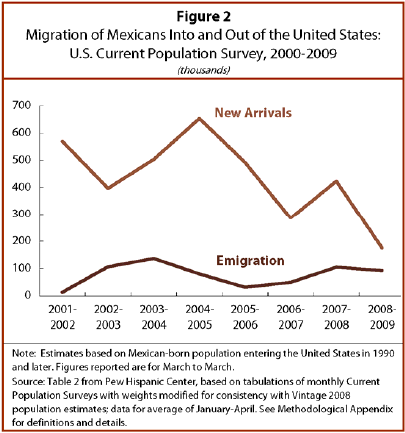 The inflow began to diminish in mid-decade, and has continued to do so through early 2009, according to an analysis of the latest available population surveys from both countries. This finding is reinforced by data from the U.S. Border Patrol showing that apprehensions of Mexicans attempting to cross illegally into the United States decreased by a third between 2006 and 2008.

Immigration flows from Mexico, like those from other countries, surged in the late 1990s. Immigration flows dropped by 2002 before beginning to grow again in 2004. But the slowdown in immigration after 2006 was such that by 2008, flows were down at least 40% from mid-decade. The change was driven largely by unauthorized immigrants; flows of legal permanent residents have been steady this decade.

The recent downturn in immigration from Mexico has been steep—a conclusion based on data from multiple sources. The evidence on emigration is not as clear-cut, but appears to point to a stable outflow to Mexico. It remains to be seen whether either trend points to a fundamental change in U.S.-Mexico immigration patterns or is a short-term response to heightened border enforcement, the weakened U.S. economy or other forces.

There is no single direct measure of immigrant arrivals. One particular challenge in measuring the influx of Mexicans is that most Mexican immigrants are unauthorized, including 80% to 85% of Mexicans who have been in the U.S. for less than a decade. As for departures, the U.S. does not track emigration, so any U.S. data can be obtained only indirectly. This analysis draws its conclusions from three data sources (for more information on methodology, see Appendix B):

The Census Bureau’s monthly Current Population Survey was used to extract estimates of the size and level of change of the Mexican-born population in the U.S. without regard to legal status. The analysis focused on arrivals since 1990 because this measure offers the most reliable sample for examining current immigration flows. This group has leveled off at 7.4 million in 2009 (Figure A-2).

Mexico’s National Survey of Employment and Occupation (ENOE, by its Spanish acronym), a household survey, has provided quarterly estimates of migration to and from Mexico since 2006. Nearly all Mexicans who leave the country go to the United States.

The Department of Homeland Security’s Office of Immigration Statistics reports trends in apprehensions by the U.S. Border Patrol. This analysis focuses on apprehensions of people born in Mexico crossing into the United States.

The terms “Hispanic” and “Latino” are used interchangeably in this report, as are the terms “foreign born” and “immigrant.”

Next: II. No Evidence Mexican Immigrants Are Leaving
← Prev Page
You are reading page1Page2Page3Page4Page5
Next Page →