There were 11.9 million unauthorized immigrants living in the United States in March 2008, according to new Pew Hispanic Center estimates. The size of the unauthorized population appears to have declined since 2007, but this finding is inconclusive because of the margin of error in these estimates.

However, it is clear from the estimates that the unauthorized immigrant population grew more slowly in the period from 2005 to 2008 than it did earlier in the decade.

The Pew Hispanic Center also estimates that inflows of unauthorized immigrants averaged 800,000 a year from 2000 to 2004, but fell to 500,000 a year from 2005 to 2008 with a decreasing year-to-year trend. By contrast, the inflow of legal permanent residents has been relatively steady this decade.

Although the growth of the unauthorized population has slackened, its size has increased by more than 40% since 2000, when it was 8.4 million. In 2005, the Pew Hispanic Center estimated there were 11.1 million undocumented immigrants in the United States. The most recent estimate, 11.9 million, indicates that unauthorized immigrants make up 4% of the U.S. population. 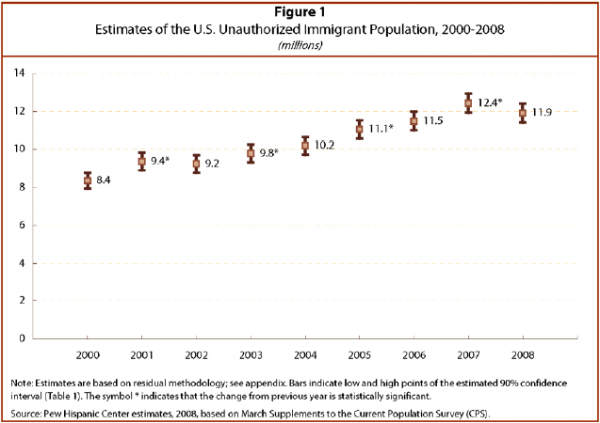 These estimates are based mainly on data from the 2000 Census and the March Current Population Surveys for the years since then. Because the Census Bureau does not ask people their immigration status, these estimates are derived using a widely accepted methodology that essentially subtracts the estimated legal-immigrant population from the total foreign-born population. The residual is treated as a source of data on the unauthorized immigrant population. [For more details, see Methodology appendix]

The estimates are not designed to explain why the net growth rate has declined. There could be a number of possible causes, including a slowdown in U.S. economic growth that has had a disproportionate impact on foreign-born Latino workers, at the same time that economic growth in Mexico and other Latin American countries has been stable. Another factor could be a heightened focus on enforcement of immigration laws, which a recent Pew Hispanic Center survey indicates has generated worry among many Hispanics. 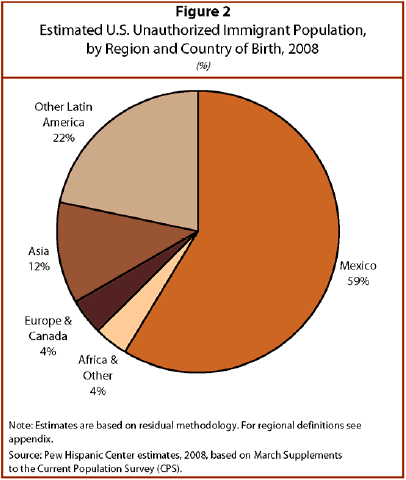 The number of undocumented immigrants from other Latin American nations has fallen since 2007.

The Pew Hispanic Center estimates the undocumented population using the “residual method,” a well-developed and widely accepted technique that is based on official government data. Under this methodology, a demographic estimate of the legal foreign-born population—including naturalized citizens, legal permanent residents, temporary legal residents and refugees—is subtracted from the total foreign-born population. The remainder, or residual, is the source of population estimates and characteristics of unauthorized immigrants.

These unauthorized immigrants consist of residents of the United States who are not U.S. citizens, who do not hold current permanent-resident visas or who have not been granted permission under a set of specific authorized temporary statuses for longer-term residence and work. The vast majority of undocumented immigrants either entered the country without valid documents or they arrived with valid visas but stayed past their visa expiration date or otherwise violated the terms of their admission.

Also included in this group are some people who had entered without valid documents or violated the terms of their visas but later obtained temporary authorization to live and work in the United States. Among them are immigrants from certain countries holding temporary protected status (TPS) or people who have filed for asylum status but whose claims are unresolved. This group may account for as much as 10% of the unauthorized estimate. Many of these “quasi-legal” individuals could revert to unauthorized status.

These Pew Hispanic Center estimates use data mainly from the Current Population Survey, a monthly survey of about 55,000 households conducted jointly by the U.S. Bureau of Labor Statistics and the Census Bureau. It is best known as the source for monthly unemployment statistics. Each March, the CPS sample size and questionnaire are augmented to produce additional data on the foreign-born population and other topics. The Pew Hispanic Center estimates make adjustments to the government data to compensate for undercounting of some groups, and therefore its population totals differ somewhat from the ones the government uses. Estimates for any given year are based on a March reference date.

“Foreign-born” refers to an individual who is not a U.S. citizen at birth or, in other words, who is born outside the U.S., Puerto Rico or other U.S. territories and whose parents are not U.S. citizens. The terms “foreign-born” and “immigrant” are used interchangeably.

Next: II. Current Estimates and Trends
← Prev Page
You are reading page1Page2Page3
Next Page →