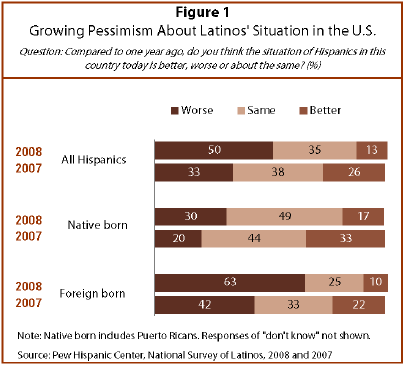 Half (50%) of all Latinos say that the situation of Latinos in this country is worse now than it was a year ago, according to a new nationwide survey of 2,015 Hispanic adults conducted by the Pew Hispanic Center.

These increasingly downbeat assessments come at a time when the Hispanic community in this country—numbering approximately 46 million, or 15.4% of the total U.S. civilian non-institutional population—has been hit hard by rising unemployment (Kochhar 2008) and stepped-up immigration enforcement.

In the survey, nearly one-in-ten Hispanic adults—native-born U.S. citizens (8%) and immigrants (10%) alike—report that in the past year the police or other authorities have stopped them and asked them about their immigration status.

Some Latinos are experiencing other difficulties because of their ethnicity. One-in-seven (15%) say that they have had trouble in the past year finding or keeping a job because they are Latino. One-in-ten (10%) report the same about finding or keeping housing.

On the question of immigration enforcement, Latinos disapprove of all five enforcement measures asked about in this survey—and generally do so by lopsided margins.

More than four-in-five Hispanics (81%) say that immigration enforcement should be left mainly to the federal authorities rather than the local police; 76% disapprove of workplace raids; 73% disapprove of the criminal prosecution of undocumented immigrants who are working without authorization; and 70% disapprove of the criminal prosecution of employers who hire undocumented immigrants. A narrow majority (53%) disapproves of a requirement that employers check a federal database to verify the legal immigration status of all prospective hires.

Most Latinos (63%) say that there has been an increase in the past year in immigration enforcement actions targeted at undocumented immigrants. And, in response to an open-ended question, a plurality (30%) of those who say there has been such an increase cite anti-immigrant sentiment as the biggest cause. Smaller shares cite government or policy-related measures (21%), security-related concerns (11%) or motivations related to the economy (9%).

Not surprisingly, worries about deportation and perceptions of discrimination in jobs or housing because of Hispanic ethnicity correlate with the view that Latinos’ situation has worsened in the past year. Two-thirds (68%) of Latinos who worry a lot that they or someone close to them may be deported say that Latinos’ situation in the country today is worse than it was a year ago, as do 63% of Latinos who have experienced job difficulties because of their ethnicity and 71% of Latinos who report housing difficulties because of their ethnicity.

Hispanics are an important voting group in the November 4th election, and their widespread pessimism about the situation of Latinos as well as their strong opposition to federal enforcement policies could well have consequences in the political arena. 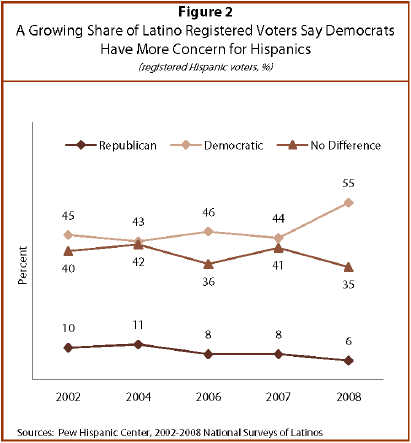 This report is based on a bilingual telephone survey of a nationally representative sample of 2,015 Hispanics ages 18 and older. Interviews were conducted from June 9 to July 13, 2008. The margin of error of the survey is plus or minus 2.8 percentage points at the 95% confidence level. For a full description of the survey methodology, see Appendix 1.

The 2008 National Survey of Latinos focuses on Hispanic adults’ views of immigration enforcement and perceptions of discrimination. The report also explores how Latinos rate the political parties and their presidential candidates on immigration and Hispanic concerns. The survey was conducted from June 9 through July 13, 2008, among a randomly selected, nationally representative sample of 2,015 Hispanic adults, 892 of whom report that they are U.S. citizens and registered to vote. The survey was conducted in both English and Spanish. The margin of error for the full sample is plus or minus 2.8 percentage points; for registered voters, the margin of error is 4.4 percentage points.

Next: II. Latinos’ Situation in this Country
← Prev Page
You are reading page1Page2Page3Page4Page5Page6
Next Page →

2007 National Survey of Latinos: As Illegal Immigration Issue Heats Up, Hispanics Feel a Chill
Latinos and the New Trump Administration
More Latinos Have Serious Concerns About Their Place in America Under Trump
Hispanic Nativity Shift
On Immigration Policy, Deportation Relief Seen As More Important Than Citizenship

Defining generations: Where Millennials end and Generation Z begins
America’s Image Abroad Rebounds With Transition From Trump to Biden
The Growing Diversity of Black America
8 facts about American dads
What the data says about gun deaths in the U.S.