Due mainly to a slump in the construction industry, the unemployment rate for Hispanics in the U.S. rose to 6.5% in the first quarter of 2008, well above the 4.7% rate for all non-Hispanics. As recently as the end of 2006, the gap between those two rates had shrunk to an historic low of 0.5 percentage points—4.9% for Latinos compared with 4.4% for non-Latinos, on a seasonally adjusted basis.1 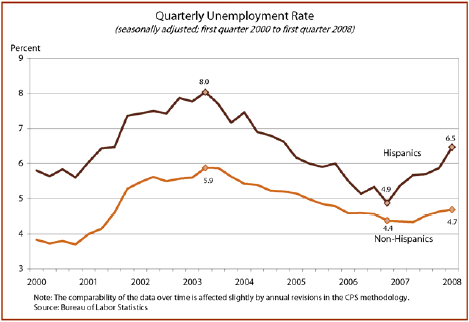 The spike in Hispanic unemployment has hit immigrants especially hard. Their unemployment rate was 7.5% in the first quarter of this year,2 marking the first time since 2003 that a higher percentage of foreign-born Latinos was unemployed than native-born Latinos. Some 52.5% of working-age Latinos (ages 16 and older) are immigrants. Latinos make up 14.2% of the U.S. labor force.

Despite the disproportionate impact that the economic slowdown has had on immigrant Latino workers, there are no signs that they are leaving the U.S. labor market. Their labor force participation rate—that is, the percentage of the immigrant working-age Latino population either employed or actively seeking employment—has remained steady. However, they now play a smaller role in the growth of the Hispanic workforce than in recent years.

These findings emerge from the Pew Hispanic Center’s analysis of the latest data from the Bureau of Labor Statistics and Census Bureau. Most of the data are from the Current Population Survey, a monthly Census Bureau survey of about 60,000 households. Data from three monthly surveys were combined to create larger sample sizes and to conduct the analysis on a quarterly basis.

This report is not able to identify immigrant workers by whether they are documented or undocumented because the immigration status of workers is not recorded in the source data. However, estimates by the Pew Hispanic Center show that unauthorized migrants account for about 5% of the U.S. labor force and about one-third of the foreign-born labor force. They are overrepresented in certain industries such as construction, where they account for 12% of employment (Passel, 2006). Most unauthorized migrants are from Latin American countries, with those from Mexico accounting for about 55% of the total.

The study focuses on developments over the past year in several key labor market indicators, from the first quarter of 2007 to the first quarter of 2008. Long-term trends, from 2000 onward, are also presented for major indicators. Some of those indicators, such as the working-age population and the size of the labor force, respond principally to demographic forces. Tracking those indicators establishes the size of a racial or ethnic group in the labor market and whether its relative size is shrinking or expanding.

Other important labor market indicators respond more to economic developments for a racial or ethnic group. Those include employment levels and the employment, unemployment and labor force participation rates. Tracking those indicators, along with estimating wages, is the key to understanding economic outcomes for Hispanic and non-Hispanic workers.

The latest trends in the labor market represent a dramatic reversal for Latino workers. Hispanics lost nearly 250,000 jobs over the past year because of the recent slump in the construction sector. For several years, construction was the mainstay of job growth for Hispanic workers, especially those who are immigrants (Kochhar, 2006 and Kochhar, 2007). Even as home building stumbled in 2006, Hispanics found nearly 300,000 new jobs in the construction industry from the first quarter of 2006 to the first quarter of 2007. The ongoing slump in construction over the past year has wiped out those gains, virtually in their entirety.

Labor market outcomes for Hispanic women appear to be worse than for men during 2007. They left the labor force in greater proportion and experienced greater increases in unemployment than did Hispanic men. Some 130,000 more Latino women became unemployed in 2007, and their unemployment rate increased from 5.6% to 7.0%.

Weekly earnings for most groups of Hispanic workers also slipped backward in the past year. Again, Latino construction workers suffered most from the decline in wages. Their earnings tumbled in 2007 and they now earn less than they did two years ago in the first quarter of 2006.

Demographically, immigrant workers now contribute less to the growth in the Hispanic workforce than in recent years. Labor market data do not reveal proximate cause—it could be the economic slowdown, increased immigration enforcement or a combination of those and related factors—but some trends are consistent with reduced levels of immigration. The Latino immigrant working-age population (ages 16 and older) increased 462,000 from the first quarter of 2007 to the first quarter of 2008. That increase was similar to the year before. However, two years earlier, between the first quarters of 2005 and 2006, this population had increased by 784,000 workers. Similarly, foreign-born Latinos have accounted for less of the total growth in the Latino labor force (those employed or actively seeking employment) in recent years.

Among the major findings of this report:

Unemployment and job losses in 2007

Employment trends for Hispanic men and women in 2007

The terms “Hispanic” and “Latino” are used interchangeably in this report. The terms “whites,” “blacks” and “Asians” are used to refer to the non-Hispanic components of their population.

Foreign-born refers to an individual who is born outside of the United States, Puerto Rico or other U.S. territories and whose parents are not U.S. citizens.

The terms “jobs” and “employment” are used interchangeably in the report although they are not necessarily the same—a single worker can hold more than one job, and a job can be filled by more than one worker

Unless otherwise indicated, estimates are not seasonally adjusted.

Next: II. Introduction
← Prev Page
You are reading page1Page2Page3Page4Page5Page6Page7Page8Page9Page10
Next Page →