Hispanic workers landed two out of every three new construction jobs in 2006 benefiting from strong employment growth in the industry even as the housing market endured a year-long slump.

The construction industry continues to be a key source of jobs for Hispanics and especially for those who are foreign born. The vast majority of new construction jobs in 2006 were filled by foreign-born Latinos, many of them recently arrived.

The employment trends in construction reflected economy-wide developments that delivered strong growth in employment for both Hispanic and non-Hispanic workers in 2006.

This fact sheet examines recent trends in the employment of Hispanic workers in the U.S. labor market. It focuses on the construction industry which was a vital contributor to the jobs recovery from the 2001 recession but which also experienced a slowdown in 2006.

Housing starts fell steadily in 2006 from 2.1 million in the first quarter to 1.6 million in the fourth quarter. Housing permits and housing units under construction also experienced a decline. The slowdown, however, did not have a negative impact on job prospects for Hispanic workers or, in particular, for foreign-born Hispanics.

The estimates in this fact sheet are derived from data from the Bureau of Labor Statistics and the Census Bureau. Most of the data is from the Census Bureau’s Current Population Survey, a monthly survey of approximately 60,000 households. Monthly data are combined to create larger sample sizes and to conduct the analysis on either an annual or quarterly basis. The analysis is for 2004-2006.

Hispanics in the Labor Market

There was strong growth in the employment of Hispanic workers in 2006. Most of the newly-employed Hispanic workers were foreign-born. The number of recently arrived immigrants who are employed nearly doubled over the past two years. The growth for Latino workers was not an isolated event; it was rooted in strong overall growth in employment in the U.S. labor market.

Foreign-born workers account for a majority of the Latino workforce and a significant share are recently arrived. In this analysis, recently-arrived workers are defined as those who arrived no earlier than 2000. 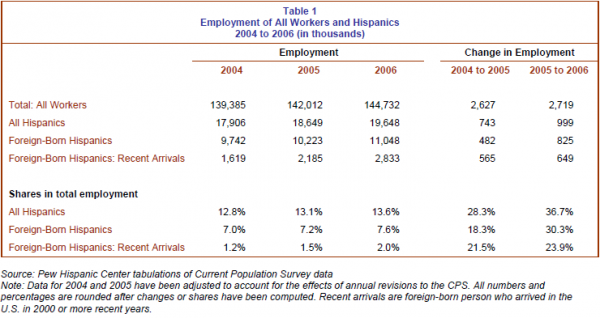 Changes in the employment of Hispanic workers

Consistent with these demographic changes, most of the recent increase in Hispanic employment was attributable to foreign-born workers. Their employment increased by 825,000 between 2005 and 2006, accounting for 30.3% of the growth in total employment (Table 1).

The growth in the hiring of foreign-born Latinos is driven by recent arrivals. The employment of recently-arrived foreign-born Hispanics increased 649,000 between 2005 and 2006. That one group of workers was responsible for 23.9% of the total increase in employment in the U.S. labor market last year. Estimates by the Pew Hispanic Center suggest that, in recent years, about two-thirds of the increase in the employment of recently-arrived Latinos has been due to unauthorized migration.

Hispanics in the Construction Industry

Hispanic workers, especially those who are recently-arrived, are a vital part of the construction industry. Despite the slowdown in the housing market, there are no indications that the role of foreign-born Hispanic workers in this industry might diminish in the near future.

Employment in the construction industry grew by 559,000 workers in 2006. Hispanic workers, mostly foreign born, were responsible for nearly two-thirds of the increase in industry employment.

This section first presents evidence on employment in the construction industry in 2006 and then considers changes between 2005 and 2006. The focus is on employment trends for Hispanic workers, particularly the foreign born.

The construction industry employed 2.9 million Hispanic workers in 2006 (Table 2). Hispanics accounted for 25% of the total employment of 11.8 million in the construction sector. 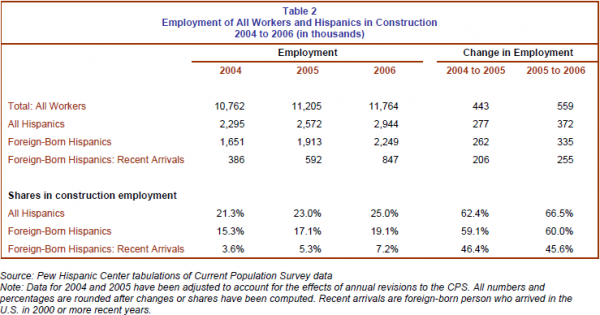 No employment slowdown in 2006

The role of the construction industry in Hispanic employment 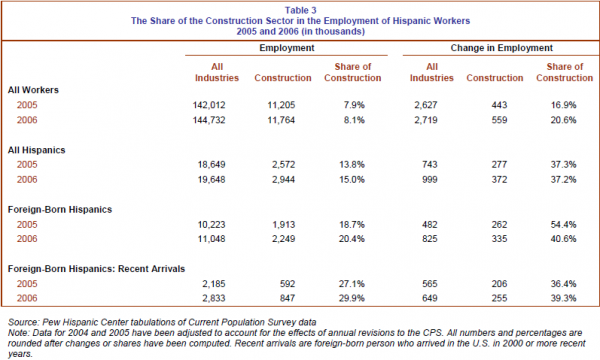 The significance of construction to Latino workers in 2006 was greater than in 2005. In the previous year, 2005, 13.8% of all Hispanic employment was in construction and 37.3% of the increase in employment for Latinos was rooted in the industry.

Not surprisingly, the South and West also contributed the most to the increase in construction jobs for Latinos—293,000 between 2005 and 2006, or 79% of the total increase.

The shift in the distribution of Hispanic construction workers across regions is consistent with regional trends in the housing market. As shown in Figure 1, trends in housing starts have differed across regions in the past three years. The Northeast and the South witnessed stronger growth in 2004 and 2005 in comparison with the Midwest and the West. 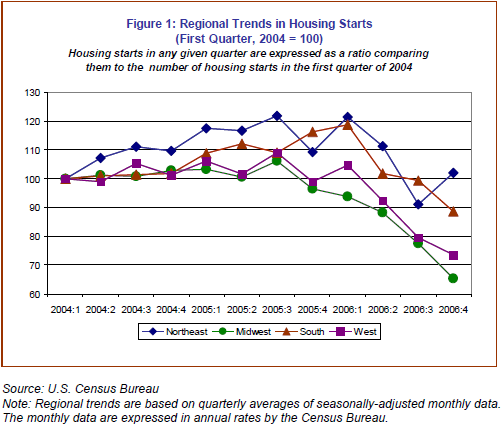 Housing activity diminished in all regions starting in 2006, but the level of activity remained strong in the Northeast and South. In particular, housing activity in the Northeast and the South was at about the same level near the end of 2006 as it was at the beginning of 2004. However, housing starts in the Midwest and the West were well below the levels seen in early 2004. Consequently, it is possible that at least some of the movement of Latino workers across regions was caused by variations in the housing market.

Next: Appendix A: Quarterly Trends in Construction Employment for Hispanic Workers
← Prev Page
You are reading page1Page2Page3Page4
Next Page →