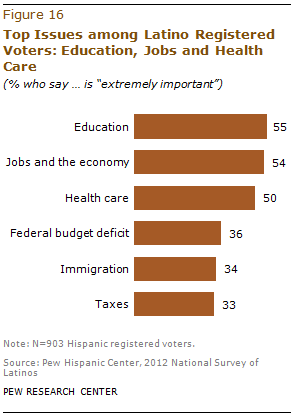 When it comes to immigration, one-third (34%) of Latino registered voters say the issue is “extremely important” to them personally. This is unchanged since 2008 (Lopez and Minushkin, 2008). This year, Latinos rank two other issues—the federal budget deficit (36%) and taxes (33%)—as important as they rank immigration.

The same three top issues are identified by both Latino registered voters and all Latinos. For all Latinos, fewer than half say that jobs and the economy (47%), education (47%) and health care (44%) are extremely important to them. 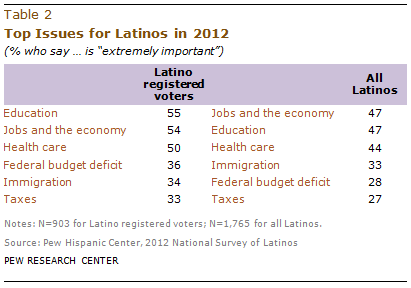 Immigration is as important to all Latinos (33%) as it is to Latino registered voters and ranks ahead of public finance issues such as the federal budget deficit (28%) and taxes (27%), which are identified as “extremely important” by lower shares of all Latinos.