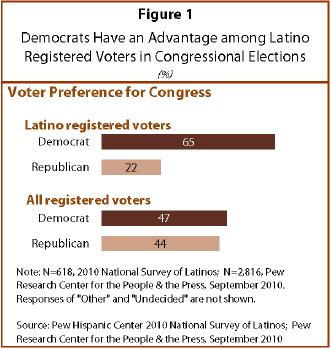 In a year when support for Democratic candidates has eroded, the party’s standing among one key voting group—Latinos—appears as strong as ever. Two-thirds (65%) of Latino registered voters say they plan to support the Democratic candidate in their local congressional district, while just 22% support the Republican candidate, according to a nationwide survey of Latinos. If this pro-Democratic margin holds up on Election Day next month, it would be about as wide as in 2008, when Latinos supported Barack Obama for president over John McCain by 67% to 31% (Lopez, 2008). 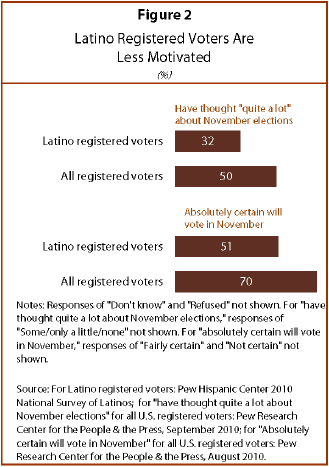 The findings for Latino registered voters emerge from a new national survey of 1,375 Latinos, including 618 registered voters, conducted from August 17 through September 19, 2010, by the Pew Hispanic Center, a project of the Pew Research Center.

Strong support for the Democrats among Latino registered voters continues a recent trend. In 2008, they supported Obama by 67% to 31% (Lopez 2008). In 2006, 69% of Latino voters supported Democratic candidates in congressional races, while 30% supported Republican candidates (Pew Hispanic Center, 2006). Even in 2004, a year when Republicans won a greater share of the Latino vote in the presidential election than at any time since the 1980s, nearly six-in-ten (58%) Latino voters supported Democrats John Kerry and John Edwards.2

In recent elections, Latinos have also represented a growing share of the electorate. According to a Pew Hispanic Center analysis of Census Bureau data, in 2008 Latino voters were 7.4% of all voters nationwide, up from 6% in 2004 (Lopez and Taylor, 2009). 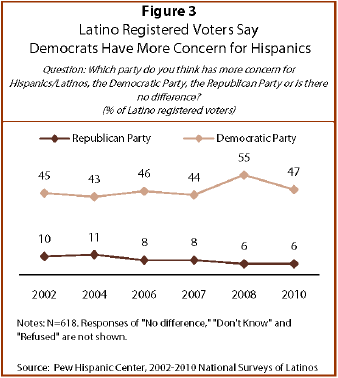 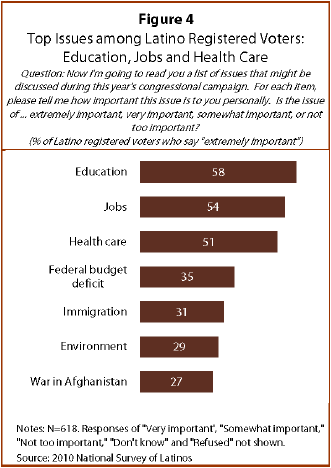 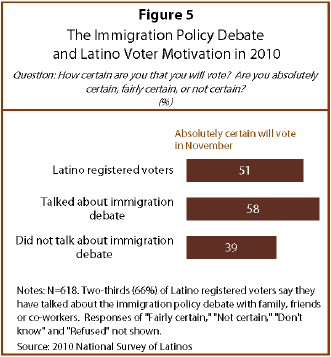 When Arizona enacted an unauthorized immigrant enforcement bill earlier this year, the immigration policy debate reignited across the country. Even so, the new survey shows that immigration does not rank as a top voting issue for Hispanics. Rather, they rank education, jobs and health care as their top three issues of concern for this year’s congressional campaign. Immigration ranks as the fifth most important issue for Latino registered voters and as the fourth most important issue for all Latinos.3

Latinos are the nation’s largest minority group with an estimated population of 46.8 million in 2008, representing 15.4% of the nation’s population. Nationally 19.3 million Latinos are eligible to vote (18 years of age or older and a U.S. citizen) according to Pew Hispanic Center estimates, up from 18 million in 2006. Latinos make up 9.2% of the nation’s 211 million eligible voters. Two out of every three Latino eligible voters reside in one of four states: California, Texas, Florida and New York.

This report is based on a nationally representative bilingual telephone survey of 1,375 Latinos ages 18 and older, including 618 registered voters. Interviews were conducted from August 17 through September 19, 2010. The margin of error for the full sample is plus or minus 3.3 percentage points at the 95% confidence level; for registered voters, the margin of error is plus or minus 4.9 percentage points. For a full description of the survey methodology, see Appendix B.

The 2010 National Survey of Latinos (NSL) focuses on Latino political participation and Latinos’ views of the upcoming congressional elections. The survey was conducted from August 17 through September 19, 2010, among a randomly selected, nationally representative sample of 1,375 Latino adults, 618 of whom report that they are registered to vote. The survey was conducted in both English and Spanish on cellular as well as landline telephones.

Next: II. The 2010 Congressional Elections
← Prev Page
You are reading page1Page2Page3Page4Page5Page6
Next Page →

Latinos and the 2010 Elections: Strong Support for Democrats; Weak Voter Motivation
I. OverviewThe Immigration IssueAbout this ReportA Note on Terminology
II. The 2010 Congressional Elections III. The Political Parties IV. Views of the Obama Administration Appendix A: The Demographics of Latino Registered Voters Appendix B: 2010 National Survey of Latinos Survey Methodology