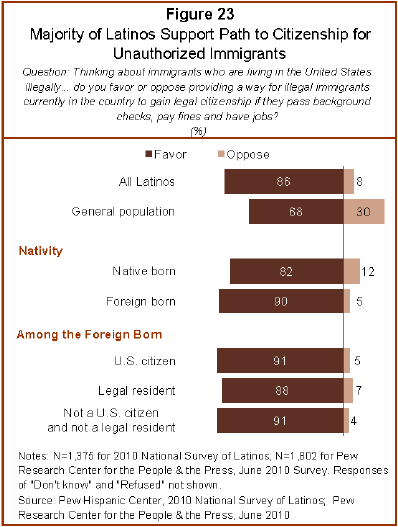 A large majority of Latinos support providing a path to citizenship for illegal immigrants, but most also say that illegal immigrants need to pay fines. Latinos continue to be in broad agreement about many other enforcement measures.

Support for a Path to Citizenship

An estimated 11.1 million unauthorized immigrants—80% of whom are of Hispanic origin—reside in the United States (Passel and Cohn, 2010). Fully 86% of Latinos support providing a path to citizenship for these immigrants if they pass background checks, pay a fine and have jobs, a level of support greater than that among the general public (68%) (Pew Research Center for the People & the Press, 2010a). 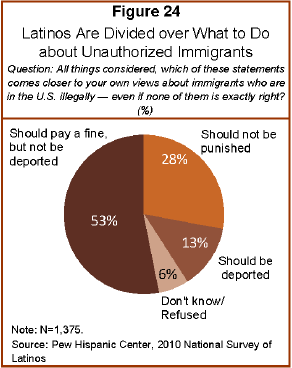 Some groups of Latinos are more supportive of deportation than others. Three-in-ten (28%) English-dominant Latinos say that unauthorized immigrants should be deported. Nearly one-in-four (23%) Latinos ages 65 or older say the same, as do some 22% of native-born Latinos and Latinos who say they identify with or lean toward the Republican Party.

Support for the option of not punishing unauthorized immigrants is highest among Hispanics who are foreign-born legal residents (36%), have less than a high school education (36%) or are Spanish dominant (34%).

Birthright Citizenship and the Children of Unauthorized Immigrants

According to the Pew Hispanic Center, an estimated 340,000 babies were born in the U.S. in 2008 to unauthorized immigrant parents—8% of all babies born that year (Passel and Taylor, 2010). As guaranteed by the 14th Amendment to the U.S. Constitution, all babies born in the U.S., including those born to unauthorized immigrant parents, are automatically granted U.S. citizenship. However, as the debate about immigration reform has intensified in recent years, some prominent elected officials have called for the repeal of birthright citizenship. 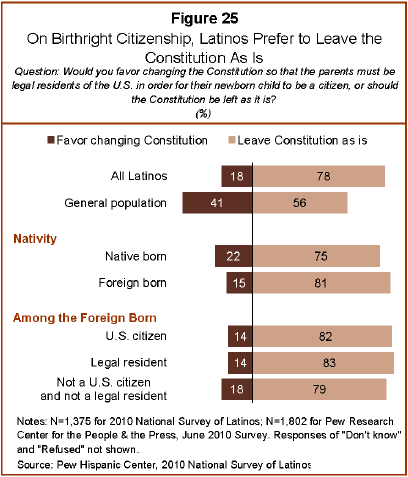 The new Pew Hispanic survey asked respondents two questions about birthright citizenship. First, it asked if they knew birthright citizenship is guaranteed by the 14th Amendment. Fully 93% of Latinos say they are aware of this. Among the general public, nearly as many (85%) said the same (Pew Research Center for the People & the Press, 2010).

Do Unauthorized Immigrants Come to the U.S. to Have Children Here? 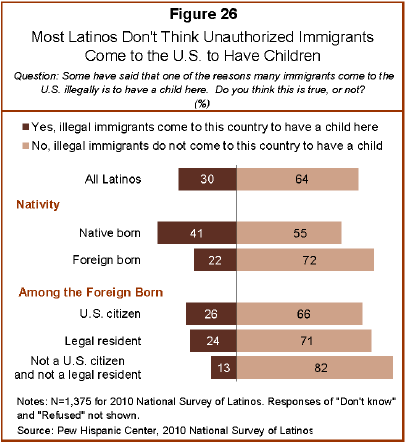 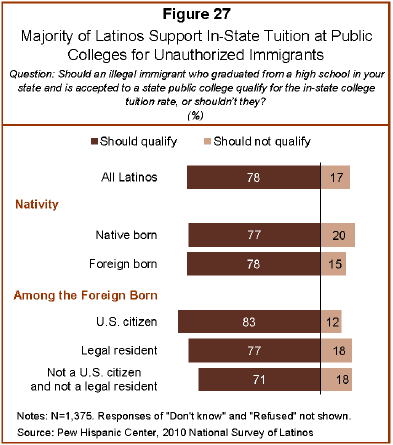 Nearly eight-in-ten (78%) Latinos say unauthorized immigrant students who graduate from a high school in their state and are accepted into a state public college should qualify for in-state tuition. Just 17% say they should not qualify. 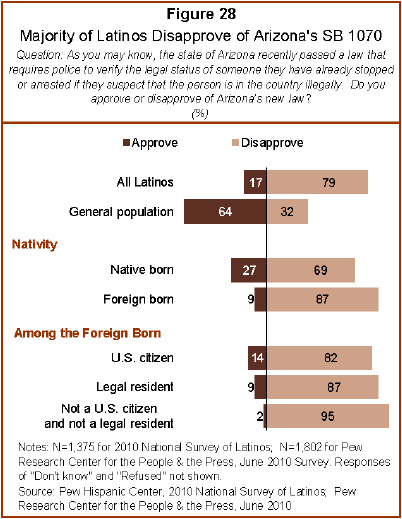 As noted earlier, Arizona recently passed SB 1070, a law that, in its key provision, authorizes local police to check the immigration status of anyone they reasonably suspect of being in the country illegally. Even though implementation of many key provisions of this law is on hold, similar bills have been introduced in other states (Morse, 2010).

Who Should Enforce Immigration Law 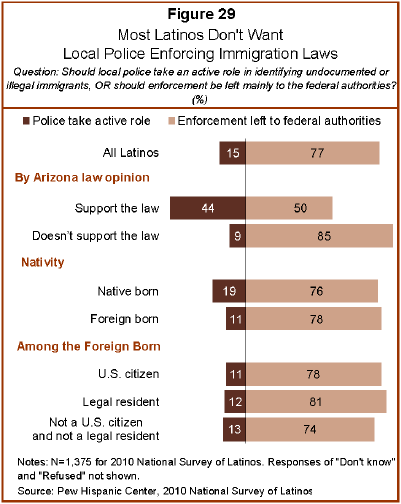 When it comes to who should enforce the nation’s laws, more than three-quarters (77%) Latinos say that enforcement should be left to the federal authorities, while just 15% say local police should take an active role. This is unchanged from 2007 and 2008. (Pew Hispanic Center, 2007 and Lopez and Minushkin, 2008).

Even though large majorities of all groups of Hispanics say enforcement should be left to the federal authorities, significant shares of some groups say local police should play an active role. The native born are nearly twice as likely as the foreign born to say this—19% versus 11%. Among the English dominant, nearly one-in-four (24%) say that local police should take an active role. Among bilingual Hispanics, 15% say the same. Among the Spanish dominant, just one-in-ten (10%) say this. 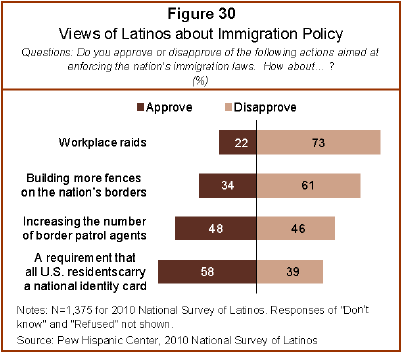 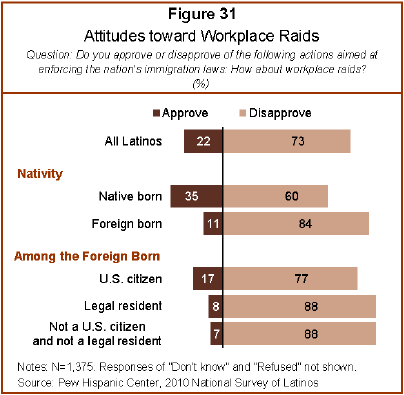 Majorities of all major groups of Latinos disapprove of workplace raids. However, the foreign born are more likely than the native born to say this. Fully 84% of foreign-born Latinos disapprove of this tactic, compared with six-in-ten (60%) of the native born. Yet even among the foreign born, there are differences. Nearly nine-in-ten (88%) of immigrant Latinos who are legal residents and the same share of immigrant Latinos who are neither U.S. citizens nor legal residents say the same. Among the foreign born who are naturalized U.S. citizens, fewer than eight-in-ten (77%) say they disapprove of workplace raids. 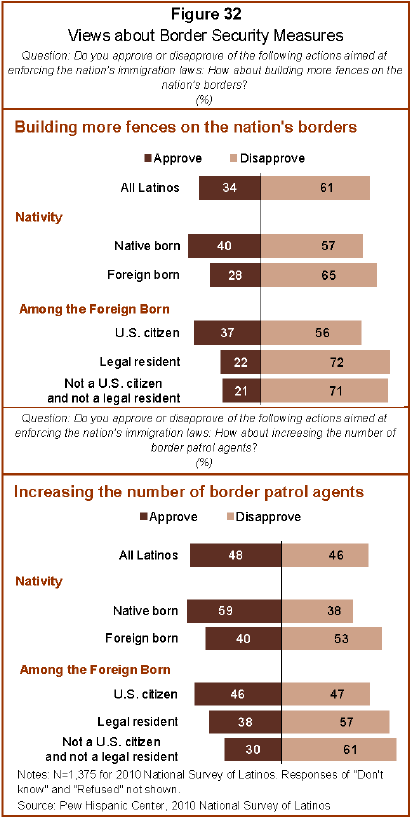 When it comes to border security measures, Latinos overall disapprove of building more fences on the nation’s borders—six-in-ten (61%) say this. However, Latinos are split on whether more border patrol agents are needed on the border—48% approve of this measure, while 46% disapprove. 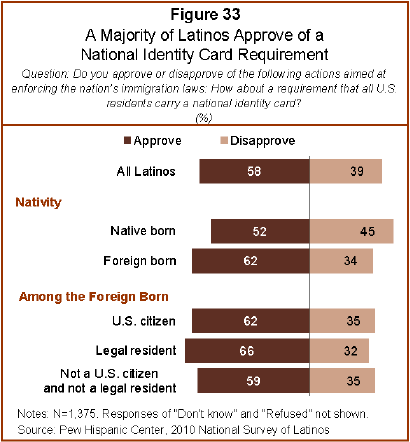 When it comes to the proposal that all U.S. residents carry a national identify card, six-in-ten (58%) Latinos say they approve of this approach and 39% say they disapprove. However, in contrast to all the other enforcement measures asked about in the survey, in this case foreign-born Latinos are more likely than native-born Latinos to support this proposal—62% versus 52%. And among the foreign born, support for this proposal is greatest among those who are legal residents (66%), followed by those who are U.S. citizens (62%) and those who are immigrants, but not U.S. citizens or legal residents (59%).