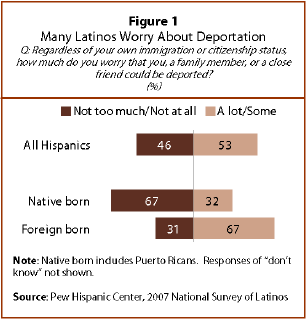 Hispanics in the United States are feeling a range of negative effects from the increased public attention and stepped-up enforcement measures that have accompanied the growing national debate over illegal immigration.

Just over half of all Hispanic adults in the U.S. worry that they, a family member or a close friend could be deported, a new nationwide survey of Latinos by the Pew Hispanic Center has found. Nearly two-thirds say the failure of Congress to enact an immigration reform bill has made life more difficult for all Latinos. Smaller numbers (ranging from about one-in-eight to one-in-four) say the heightened attention to immigration issues has had a specific negative effect on them personally. These effects include more difficulty finding work or housing; less likelihood of using government services or traveling abroad; and more likelihood of being asked to produce documents to prove their immigration status.

However, when respondents were asked about changes in the overall situation of Latinos in this country in the past year, no consensus view emerged. About one-in-three say things have gotten worse, about one-in-four say things have gotten better, and about four-in-ten say there has been no change. Despite their concerns about the impact of the immigration debate, Hispanics are generally content with their own lives and upbeat about the long-term prospects for Latino children. Nearly eight-in-ten respondents, for example, say they are very (45%) or somewhat (33%) confident that Hispanic children growing up now will have better jobs and more money than they have.

Hispanics are the nation’s largest minority group, numbering 47 million (about 15.5% of the total U.S. population). About a quarter of Hispanic adults are unauthorized immigrants, most of them arriving as part of a heavy wave of immigration that began gathering force in the 1970s.1 Twice in the past two years, the U.S. Congress tried but failed to pass comprehensive legislation to deal with the problem of illegal immigration. However, federal, state and local governments have pressed forward with hundreds of new enforcement bills, regulations and procedures—including stepped-up deportations, more workplace raids, and restrictions on access to driver’s licenses and other government services and benefits. (A summary of key trends in enforcement begins on page 6).

The survey finds that Hispanics oppose these enforcement measures, often by lopsided margins. Three quarters (75%) disapprove of workplace raids; some 79% prefer that local police not take an active role in identifying illegal immigrants; and some 55% disapprove of states checking for immigration status before issuing driver’s licenses. By contrast, non-Hispanics are much more supportive of all these policies, with a slight majority favoring workplace raids and a heavy majority favoring driver’s license checks.2 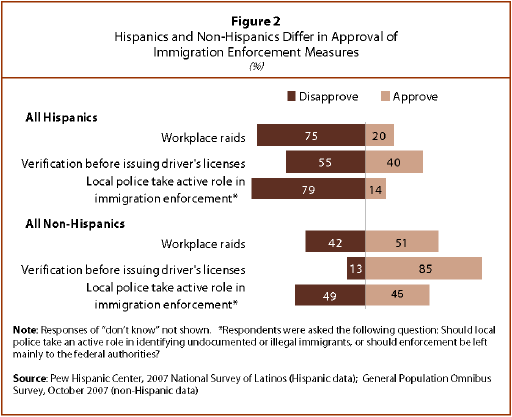 In addition to this wide variance in views between Hispanics and non-Hispanics, the survey finds less pronounced—but still significant—gaps within the Hispanic community on a range of matters, from perceptions about discrimination to attitudes about illegal immigration to support for tougher enforcement measures. For example, on questions about enforcement policies, native-born Hispanics take positions that are closer to those of the rest of the U.S. population than do foreign-born Hispanics. Also, the native born are less likely than the foreign born to report a negative personal impact from the heightened attention to immigration issues.

Likewise, Hispanics who are not citizens feel much more vulnerable in the current environment than do Hispanics who are citizens. They are about twice as likely as Hispanic citizens to worry about deportation and to feel a specific negative personal impact from the heightened attention to illegal immigration. (Non-citizens account for 44% of the total adult Hispanic population. Of these non-citizen Latino adults, an estimated 55% are undocumented immigrants and the other 45% are legal aliens).

Hispanics also have widely varying assessments about the amount of attention that local officials and political leaders in their communities are paying to the issue of illegal immigration. A third say a lot, but four-in-ten say not too much, and one-in-five say none at all. These variances likely reflect the reality that immigration has become a politically heated local issue in some parts of the country but not in others.

Whatever new vulnerability Hispanics feel in the present political and policy environment, the survey finds little evidence of a backlash against illegal immigration by Hispanics themselves. To the contrary, Hispanics generally see illegal immigrants as a plus – both for the Latino community itself and for the U.S. economy in general. Here, too, there are differences by nativity – with the foreign born significantly more positive than the native born in their views about the effects of illegal immigration. But even the native born are more positive than negative. And, as they assess the impact of illegal immigrants on the economy, native-born Latinos are more inclined to see a positive impact now (64%) than they were five years ago, when just 54% said the impact was positive.

The Pew Hispanic Center survey was conducted by telephone from October 3 through November 9, 2007 among a randomly-selected, nationally-representative sample of 2,003 Hispanic adults ages 18 and over (with a margin of error of plus/minus 2.7 percentage points). A summary of its key findings:

Native-born persons include those born in Puerto Rico.

Citizens include citizens by birth and naturalization.

Percents may not total 100 due to rounding or the omission of don’t know/refused responses.

The 2007 National Survey of Latinos focuses on Hispanics’ views on the immigration debate and immigration enforcement, attitudes towards illegal immigrants, and perceptions of discrimination. The survey was conducted by telephone from October 3 through November 9, 2007 among a randomly-selected, nationally-representative sample of 2,003 Hispanic adults (with a margin of error of plus/minus 2.7%). Contributors to the report include April Clark, D’Vera Cohn, Richard Fry, Cary Funk, Felisa Gonzales, Rakesh Kochhar, Gretchen Livingston, Jeffrey Passel and Paul Taylor.

Next: II. By the Numbers: Trends in Enforcement
← Prev Page
You are reading page1Page2Page3Page4Page5Page6Page7
Next Page →