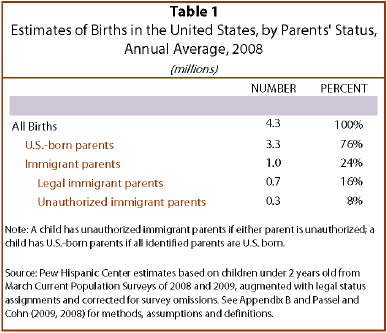 An estimated 340,000 of the 4.3 million babies born in the United States in 2008 were the offspring of unauthorized immigrants, according to a new analysis of U.S. Census Bureau data by the Pew Hispanic Center, a project of the Pew Research Center.

Unauthorized immigrants comprise slightly more than 4% of the adult population of the U.S., but because they are relatively young and have high birthrates, their children make up a much larger share of both the newborn population (8%) and the child population (7% of those younger than age 18) in this country.

These figures are based on data from the U.S. Census Bureau’s March 2009 Current Population Survey, augmented with the Pew Hispanic Center’s analysis of the demographic characteristics of the unauthorized immigrant population using a “residual estimation methodology” it has employed for the past five years. (For a description, see Appendix B.) 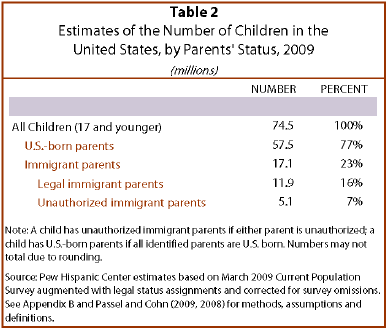 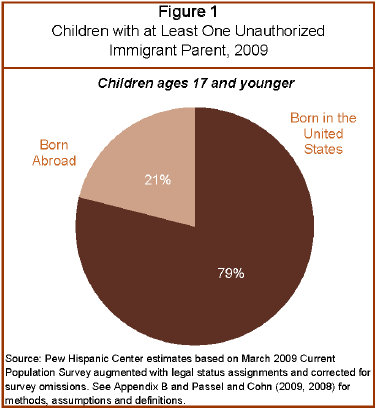 The 14th Amendment to the U.S. Constitution, adopted in 1868, grants an automatic right to citizenship to anyone born in the U.S. In recent weeks, a number of prominent elected officials have called for the repeal of birthright citizenship, which they argue serves as one of the magnets that attract undocumented immigrants to the United States. A nationwide survey by the Pew Research Center for the People & the Press in June found that, by 56% to 41%, the public opposes changing this provision of the Constitution.1

This report does not address the merits of the birthright citizenship debate. Rather, it analyzes the family structure and parenting status of unauthorized immigrants. A follow-up Pew Hispanic report, expected to be released in several weeks, will examine trends in the size of the unauthorized population and key demographic characteristics, including its geographic settlement patterns; its countries and regions of origin; and its economic circumstances.

Next: II. Immigrants, Parenthood and Fertility
← Prev Page
You are reading page1Page2Page3Page4Page5
Next Page →