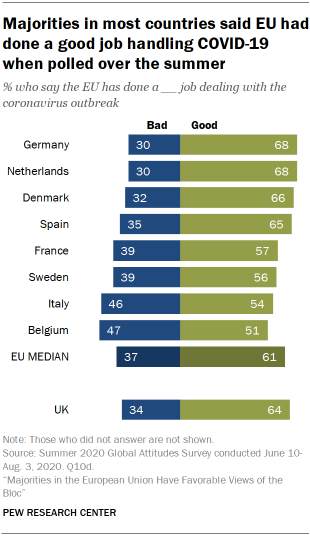 Europe was home to some of the earliest – and largest – outbreaks of the novel coronavirus in February and March. But, following strict quarantine measures in places such as Spain, Italy and France – as well as some EU-wide initiatives like closing borders between countries for the first time in the bloc’s history – the number of cases fell dramatically. While cases are now rising precipitously across much of Europe, results of a survey fielded from June to August indicate that as of summer 2020, many in Europe said the EU had handled COVID-19 well.

(For more on the state of the coronavirus pandemic in Europe at the time of the survey, see “Europeans approved of EU’s handling of COVID-19 this summer – but much has changed since”) 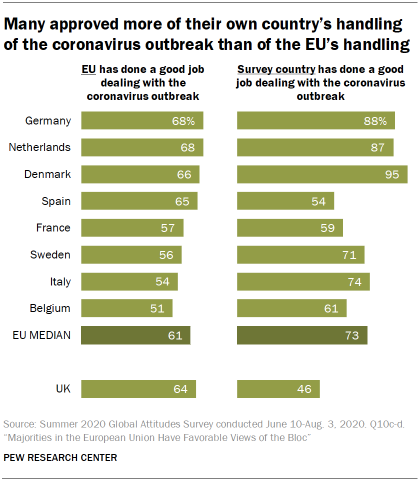 Outside of the UK, Spain stands out as the only other European country surveyed where more approved of how the EU handled COVID than said the same of their own country – 65% vs. 54% said each had done a good job, respectively.

French adults viewed both the EU and their own country’s response in similar terms, while in places like Italy and Germany, people were more likely to say their own government’s response was good than that of the EU by 20 percentage points.

In Sweden, Italy, Germany and the UK, those on the ideological left were more likely than those on the right to approve of the EU’s handling of the COVID-19 pandemic. In France – where the ruling party, En Marche, is centrist – those who place themselves in the center of the ideological spectrum were more likely to approve of the EU’s work. Age, education levels and income levels were only related to opinions of the bloc’s efforts in a handful of countries.

Support for right-wing populist parties was related to criticism of the EU’s response to coronavirus in four European countries. This was most pronounced in Germany, where 53% of those with a favorable opinion of the right-wing Alternative for Germany (AfD) said the EU had done well handling the COVID-19 outbreak, versus 69% who do not hold favorable views of the party – a 16-point difference. Similar differences emerged in Italy, Sweden and the UK. 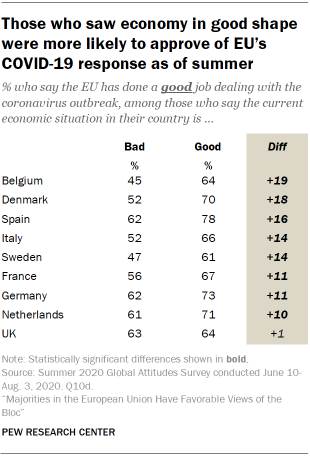 The coronavirus outbreak has negatively impacted economies across the European Union and the UK. In July, as the survey was fielding across Europe, the EU agreed to a 750 billion euro bailout package to help stimulate the economies of its member nations and to help them recover from the recession caused by COVID-19.

In all EU member states surveyed, those who viewed their own domestic economy as in good shape were more likely to approve of the EU’s handling of the coronavirus pandemic. 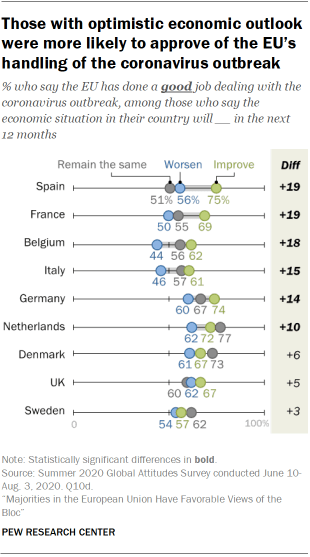 In most countries, too, people’s economic optimism was tied to their opinions of the EU’s efforts. For example, in Italy – one of the largest beneficiaries of the EU recovery deal – those who expected their economy would improve were more likely to approve of the EU’s handling of the COVID-19 outbreak than those who expected their economy to worsen – 61% vs. 46%, respectively.

In Spain, another country that will be a key recipient of EU money, the difference was almost 20 percentage points. But even in the Netherlands – a country that led some of the opposition to the stimulus package prior to its passage – the public’s economic optimism was tied to their views of the EU’s response. 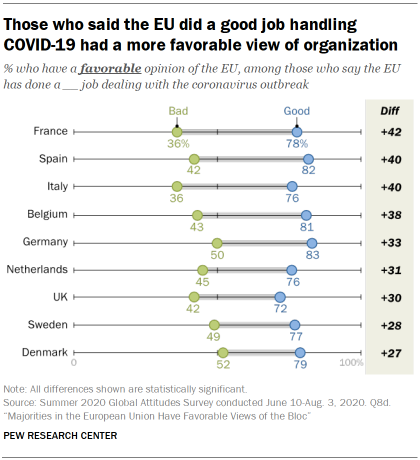 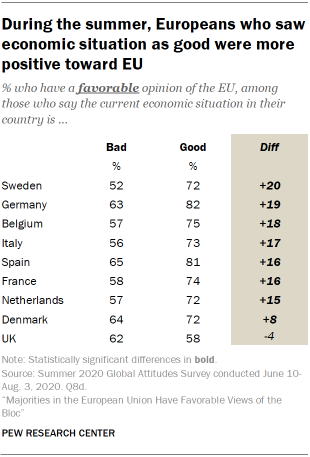 When it comes to future economic perceptions, the pattern was similar: Those who expected their country’s economy to improve next year had a more positive opinion of the EU than those who said the economic situation will worsen.

Next: 3. Many in Europe were confident in Merkel and Macron over the summer; Johnson received mixed ratings
← Prev Page
Page1Page2You are reading page3Page4Page5Page6Page7Page8Page9Page10
Next Page →

Majorities in the European Union Have Favorable Views of the Bloc 1. Member nations had broadly favorable views of the EU
2. Before the fall resurgence, most Europeans approved of EU’s COVID-19 response
Economic views were related to opinion of how EU handled COVID-19Perceptions of EU response to COVID-19 colored views of the organization
3. Many in Europe were confident in Merkel and Macron over the summer; Johnson received mixed ratings 4. Views of many European political parties improved against backdrop of COVID-19 5. Attitudes toward the EU and European leaders from outside the region Appendix A: Classifying European political parties Appendix B: Political categorization Acknowledgments Methodology