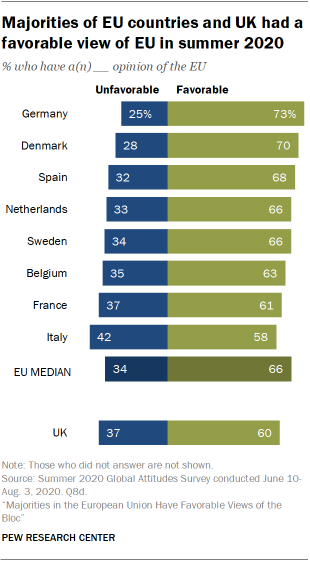 The European Union was seen more favorably than not across each of the eight EU member countries surveyed this summer. A median of 66% across these countries expressed a positive opinion, with positive ratings ranging from a low of 58% in Italy to a high of 73% in Germany – that nation’s most positive assessment of the EU since the question was first posed in 2004.

While their country is no longer a member of the economic and political union, 60% of Britons viewed the EU favorably, compared with 37% who had a negative view. In the UK, too, this was the most positive assessment of the organization over the 16 years Pew Research Center has polled Britons on the topic.

Outside of the record highs recorded in Germany and the UK, positive views of the EU increased substantially in France, from 51% in 2019 to 61% this year. Elsewhere, views have largely held steady. Only in Sweden did EU favorability decline, from 72% in 2019 to 66% this year. 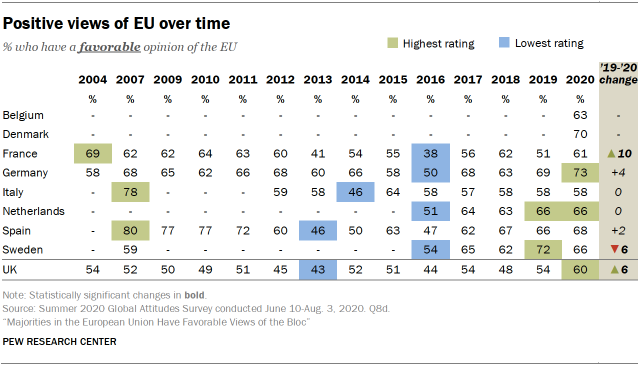 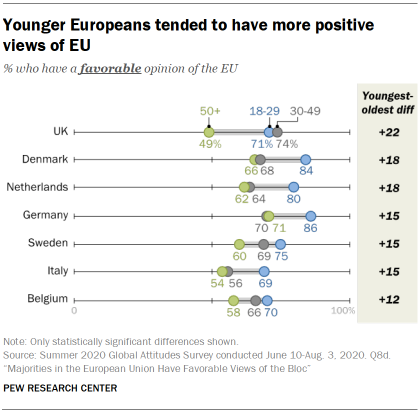 Across most of the EU countries surveyed, those ages 18 to 29 were more likely to hold favorable views of the EU than those 50 and older. For example, 80% of Dutch adults under 30 had a positive view of the organization, compared with 62% of their older counterparts.

The largest age difference in views of the EU comes from outside the bloc: Younger Britons were 22 percentage points more likely to have a favorable view of the EU than those ages 50 and older. 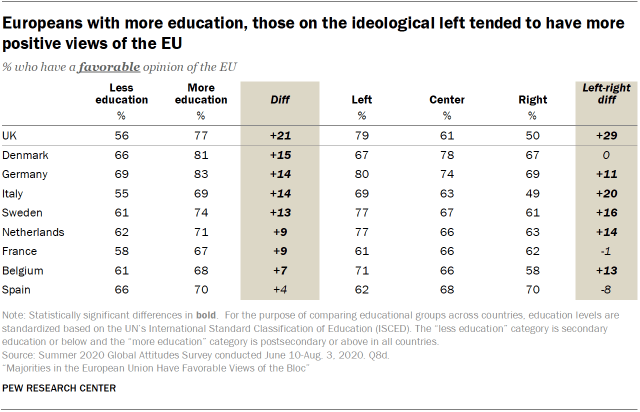 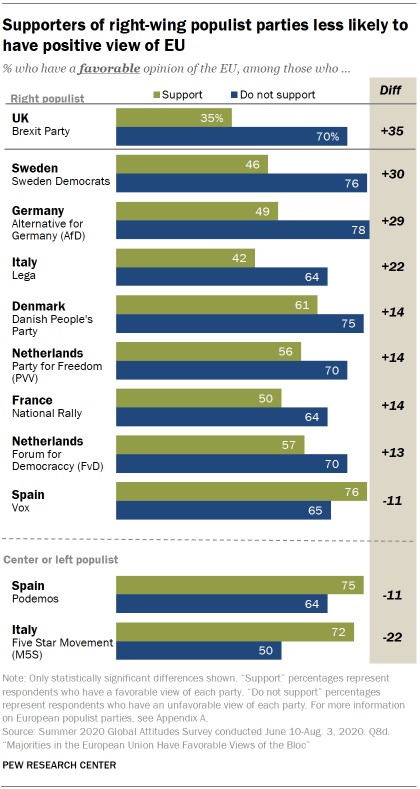 In Sweden, those who supported the right-wing Sweden Democrats were 30 percentage points less likely to have a favorable view of the EU than those who did not support the Sweden Democrats. Double-digit differences in EU favorability were present between supporters and nonsupporters of nearly every right-wing populist party included in the survey.

Supporters of the left-wing Podemos in Spain and the centrist Five Star Movement in Italy were also more likely to have a favorable view of the EU than nonsupporters.

Next: 2. Before the fall resurgence, most Europeans approved of EU’s COVID-19 response
← Prev Page
Page1You are reading page2Page3Page4Page5Page6Page7Page8Page9Page10
Next Page →

Majorities in the European Union Have Favorable Views of the Bloc
1. Member nations had broadly favorable views of the EU
2. Before the fall resurgence, most Europeans approved of EU’s COVID-19 response 3. Many in Europe were confident in Merkel and Macron over the summer; Johnson received mixed ratings 4. Views of many European political parties improved against backdrop of COVID-19 5. Attitudes toward the EU and European leaders from outside the region Appendix A: Classifying European political parties Appendix B: Political categorization Acknowledgments Methodology