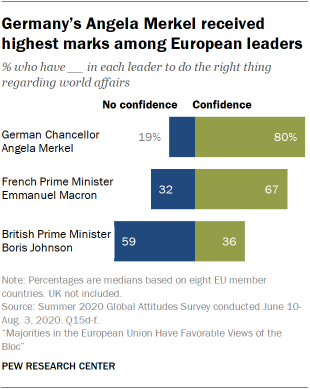 The survey asked about confidence in two leaders of EU member countries and UK Prime Minister Boris Johnson to do the right thing regarding world affairs. Of these leaders, German Chancellor Angela Merkel and French President Emmanuel Macron received generally positive ratings: A median of 80% across eight EU member states had confidence in Merkel, and 67% said the same of Macron. (The poll was conducted over the summer, prior to the latest surge in European cases and additional government restrictions.)

Johnson received somewhat lower marks from the same EU countries: A median of 36% said they had confidence in Johnson to do the right thing in world affairs, while 59% had no confidence in the British leader. 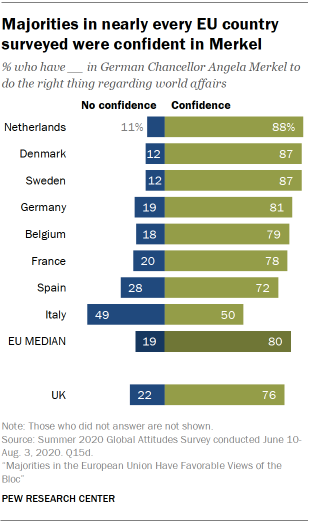 Many across the EU countries surveyed had confidence in German Chancellor Angela Merkel to do the right thing regarding world affairs, including almost nine-in-ten in the Netherlands, Denmark and Sweden.

In the UK, Britons were very confident in Merkel: About three-quarters (76%) trusted the leader to do the right thing.

In general, confidence in Merkel has increased or stayed roughly the same across several European countries since this question was first asked. In Sweden, for example, the share who expressed confidence in Merkel increased from 65% in 2007 to 87% in this year’s survey. (In 2007, 24% of Swedes did not offer an opinion.) 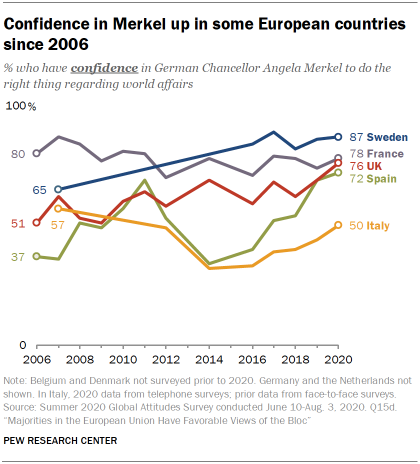 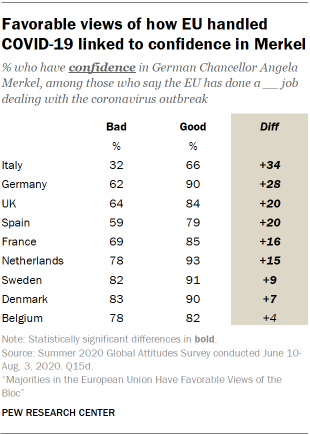 In almost every European country surveyed this summer, confidence in Merkel was linked to people’s perceptions of how well the EU did handling COVID-19. For example, in Italy, those who thought the EU had done a good job dealing with the outbreak were more than twice as likely to say they had confidence in Merkel than those who thought the EU did a bad job handling the pandemic – 66% vs. 32%, respectively.

Outside of Germany, ideology often shaped views of Merkel. In Italy, the UK and Sweden, those who placed themselves on the left had more confidence in Merkel than those who placed themselves on the right. This pattern was reversed in France and Spain, where those on the right were more confident in Merkel than those on the left.

Macron trusted across much of the EU 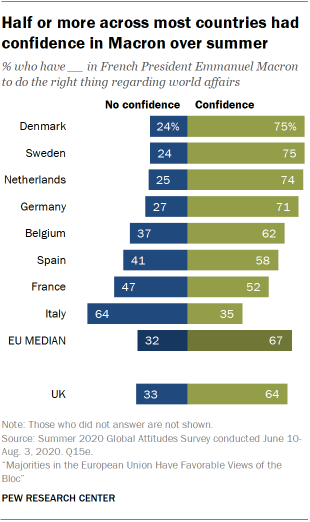 French President Emmanuel Macron received generally positive ratings across the eight EU countries surveyed and the UK. An EU median of 67% had confidence in the French leader to do the right thing regarding world affairs, but this ranged from a low of 35% in Italy to a high of 75% in both Denmark and Sweden.

In the UK, people were more confident than not in the French president. Roughly two-thirds had confidence in Macron to do the right thing, while one-third said the opposite. 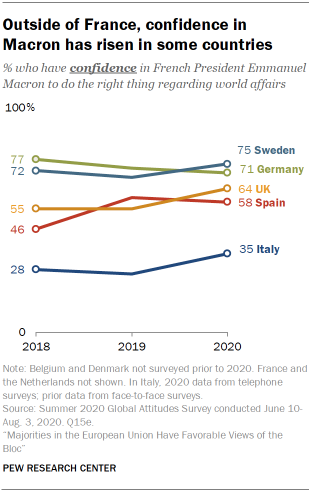 Confidence in Macron has risen in some European countries since this question was first asked in 2018. In Spain, for example, positive ratings increased from 46% in 2018 to 58% in 2020, though they are largely unchanged since last year. Confidence in Macron also increased in the UK (by 9 percentage points) and Italy (+7 points) over the past two years.

In Germany, however, confidence in the French leader decreased 6 points since 2018, though it changed little since last year. 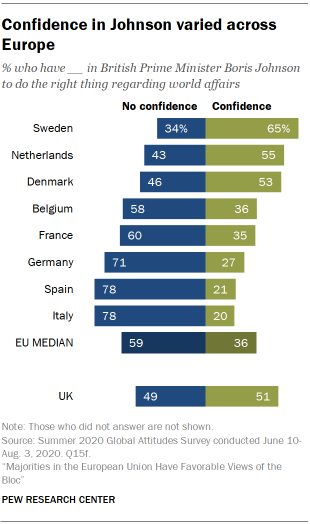 Across the eight EU countries surveyed over the summer, a median of 36% said they had confidence in British Prime Minister Boris Johnson to do the right thing regarding world affairs. Positive assessments of the prime minister ranged from 20% in Italy to 65% in Sweden.

In five of the eight EU countries polled, majorities said they had no confidence in Johnson. Roughly three-quarters (78%) of Spaniards and Italians held this view. 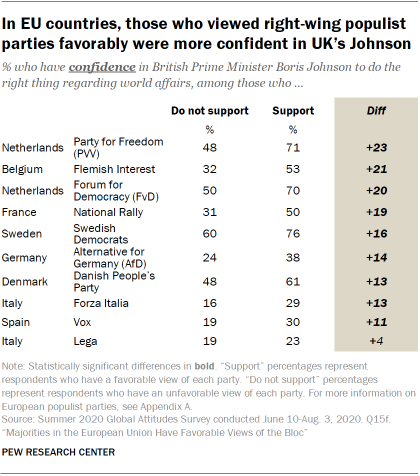 Next: 4. Views of many European political parties improved against backdrop of COVID-19
← Prev Page
Page1Page2Page3You are reading page4Page5Page6Page7Page8Page9Page10
Next Page →

Europeans approved of EU’s handling of COVID-19 this summer – but much has changed since
Despite Pandemic, Many Europeans Still See Climate Change as Greatest Threat to Their Countries
Attitudes toward EU are largely positive, both within Europe and outside it
European Public Opinion Three Decades After the Fall of Communism
Europeans Credit EU With Promoting Peace and Prosperity, but Say Brussels Is Out of Touch With Its Citizens
5 facts about the QAnon conspiracy theories
Defining generations: Where Millennials end and Generation Z begins
In past elections, U.S. trailed most developed countries in voter turnout
What the 2020 electorate looks like by party, race and ethnicity, age, education and religion
2020 election reveals two broad voting coalitions fundamentally at odds