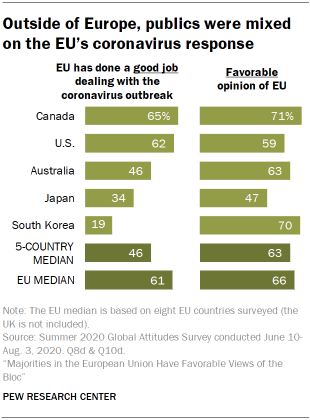 In the non-European countries surveyed, publics gave mixed reviews of the European Union’s handling of COVID-19. In both Canada and the U.S., about six-in-ten or more said the EU had done a good job dealing with the coronavirus pandemic. Australians were roughly divided: 46% said the EU had done a good job while 45% rated it poorly. In Japan, more said the EU had done a bad job than a good job – 52% vs. 34%, respectively. And in South Korea – which has been lauded for its response to the global pandemic – the public was much less impressed. Only 19% believed the EU did a good job handling the coronavirus, and an overwhelming 78% thought it did a bad job. (The poll was conducted over the summer, prior to the latest surge in European cases and additional government restrictions.)

Despite these mixed reviews of its coronavirus response, as an institution the EU received relatively positive ratings in these countries. Around half or more in every country had a favorable view of the organization, ranging from a low of 47% in Japan to a high of 71% in Canada. 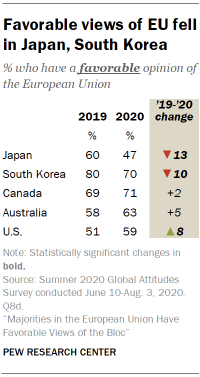 Favorable assessments of the EU declined substantially in Japan and South Korea, even while they held steady or increased elsewhere. In Japan, the share who had a favorable opinion of the organization decreased 13 percentage points, from 60% in 2019 to 47% this year. And in South Korea, favorable opinion declined 10 points over this same time period.

Views of Merkel, Macron and Johnson in non-European countries 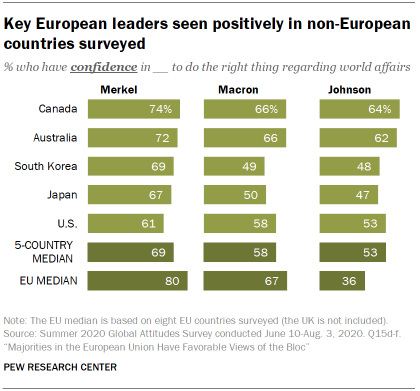 Among the non-European countries surveyed, German Chancellor Angela Merkel received positive ratings, though ratings were slightly lower outside the region than inside (due in part to fewer people outside of Europe offering an opinion about Merkel). Still, a majority in each of these five non-European countries surveyed had confidence in her leadership in world affairs.

Views of British Prime Minister Boris Johnson were noticeably higher in non-European countries compared with his ratings within Europe. Outside Europe, around half or more had confidence in him in each of the countries surveyed – whereas in five of eight EU countries, majorities lacked confidence in his handling of global affairs. 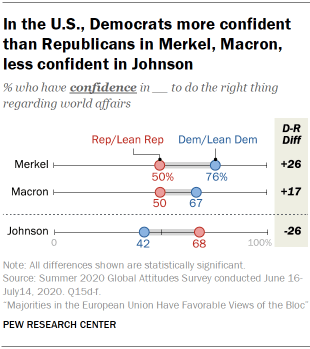 Assessments of the EU’s handling of the coronavirus outbreak were sometimes tied to confidence in European leaders. Across three of the five non-European countries included in the survey, for example, those who said the EU did a good job dealing with COVID-19 were more likely to have confidence in both Merkel and Macron.

Majorities in the European Union Have Favorable Views of the Bloc 1. Member nations had broadly favorable views of the EU 2. Before the fall resurgence, most Europeans approved of EU’s COVID-19 response 3. Many in Europe were confident in Merkel and Macron over the summer; Johnson received mixed ratings 4. Views of many European political parties improved against backdrop of COVID-19
5. Attitudes toward the EU and European leaders from outside the region
Views of Merkel, Macron and Johnson in non-European countries
Appendix A: Classifying European political parties Appendix B: Political categorization Acknowledgments Methodology