For this report, we grouped people into two political categories: those who support the governing political party (or parties) and those who do not. These categories were coded based on the party or parties in power at the time the survey was fielded, and on respondents’ answers to a question asking them which political party, if any, they identified with in their country.3

Survey respondents who did not indicate support for any political party, or who refused to identify with one, were considered to be not supporting the government in power.

Countries where an insufficient number of people identified with any party in government have been excluded from the analysis. Below is a table that outlines the governing political parties in each country. 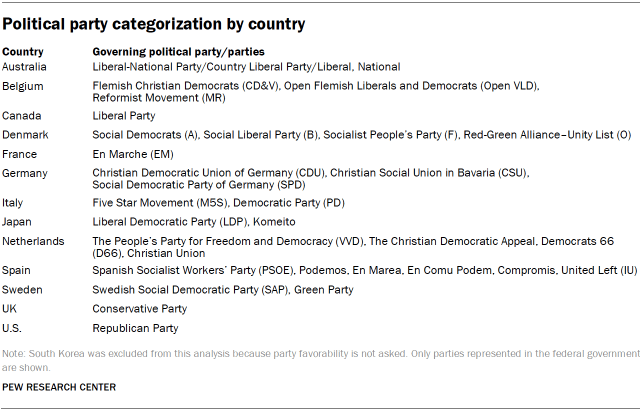 Next: Acknowledgments
← Prev Page
Page1Page2Page3Page4Page5Page6Page7You are reading page8Page9Page10
Next Page →

Majorities in the European Union Have Favorable Views of the Bloc 1. Member nations had broadly favorable views of the EU 2. Before the fall resurgence, most Europeans approved of EU’s COVID-19 response 3. Many in Europe were confident in Merkel and Macron over the summer; Johnson received mixed ratings 4. Views of many European political parties improved against backdrop of COVID-19 5. Attitudes toward the EU and European leaders from outside the region Appendix A: Classifying European political parties
Appendix B: Political categorization
Acknowledgments Methodology