In 2019, when Pew Research Center asked about party favorability in Europe, few parties received positive marks from at least half the population. But, among the 40 parties tested in summer 2020, 11 were seen favorably by more than 50% in each country. 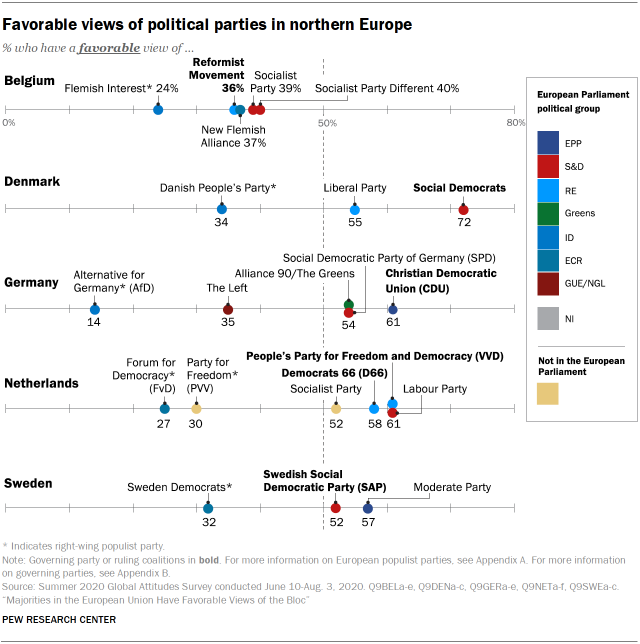 Across all northern European countries surveyed except Belgium, at least one party per country met this threshold. The same is not the case when it comes to southern European countries, however. In France, Spain and Italy, no party earned approval from more than half, and in the case of most parties tested in these three countries, few cracked 40%. In the United Kingdom, 48% reported positive opinions of the opposition Labour Party, while all other parties tested fall short of this mark. 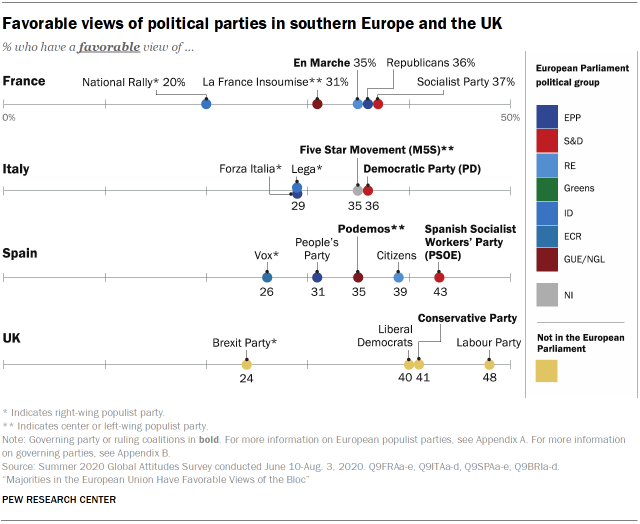 In Denmark – where, as of summer, nearly everyone (95%) approved of how their country had handled the COVID-19 pandemic and a majority said their country was more united than before it began – there was also widespread approval of the governing Social Democrats. Around three-quarters had a favorable view of the party – making the Social Democrats not only the most popular party in Denmark but also the most popular among the 40 European parties asked about on the survey.

In Germany, the governing Christian Democratic Union (CDU) was seen more favorably (61%) than all other parties asked about – including their coalition partner the Social Democratic Party, or SPD (54%). But these two parties were both as popular as or more popular than the other German political parties asked about, including The Greens/Alliance 90 (54%), The Left (35%) and Alternative for Germany (AfD) (14%).

In the Netherlands and Sweden, while the governing parties were seen favorably by around half or more, they tended to be no more popular than major opposition parties. In Belgium, Italy, France and Spain, while the same pattern held true, the governing parties were only seen favorably by around four-in-ten or fewer in each country. For example, in Belgium, 36% had a positive view of the governing Reformist Movement. And in France and Italy, around a third said the same of En Marche (35%), the Democratic Party (36%) and the Five Star Movement (35%).

The UK stood out as the only country in which an opposition party was significantly more popular than the governing party. About half had a favorable view of Labour – which is out of government – while 41% said the same of the Conservative Party, which has led the country since 2010.

Populist parties were among the least popular parties tested. In almost every instance, populist parties received support from only around a third or less of the population. For example, in Germany, only 14% had a favorable view of AfD. In France and Belgium respectively, National Rally and Flemish Interest each failed to garner 25%.

The only two populist parties that received favorable reviews (relative to other parties asked about in their country) were those that are currently in government: Podemos in Spain (35%) and the Five Star Movement in Italy (35%).

Favorable views of many parties have increased since last year 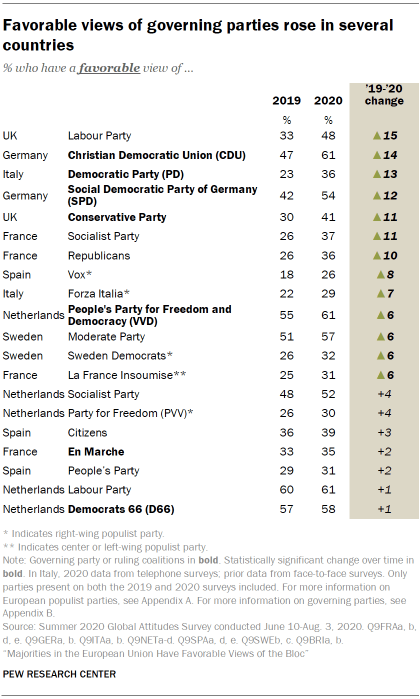 Positive ratings for many parties were also up substantially since last year. In Italy, for example, although only a minority (36%) had a positive view of the Democratic Party, this is still up 13 percentage points since last year. In the UK, positive views of both Labour and the Conservative Party increased by double digits (up 15 and 11 points, respectively). The two governing coalition parties in Germany, CDU and SPD, saw similarly large growth in approval over the past year (up 14 and 12 points).

In France, Spain, Sweden and the Netherlands, too, at least one party significantly improved in the public’s esteem since last year. 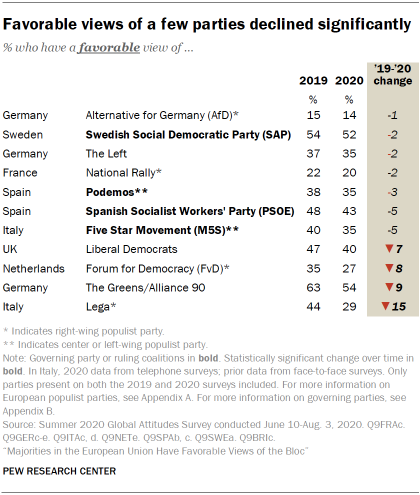 The only parties for which favorability decreased over this period were the Liberal Democrats in the UK, The Greens/Alliance 90 in Germany and two right-wing populist parties – Forum for Democracy in the Netherlands and Lega in Italy. Lega, the only party that experienced a double-digit drop in approval, is headed by Matteo Salvini, who occupied the Italian Parliament to protest virus restriction measures and was outspoken about his anti-mask stance during the course of fieldwork.

Across the seven European countries surveyed over the summer – when the coronavirus appeared to be largely under control across the region – there was a strong relationship between favorable views of the governing party that held the most seats in the government and the sense that the government had done a good job handling COVID-19. For example, Denmark stood apart as both the European country where the highest percentage said their government had done a good job dealing with the coronavirus pandemic (95%) and as the home to the party (the Social Democrats) that garnered the highest approval ratings (72%). In contrast, in the UK – where only 46% said their country had done a good job with the pandemic, the lowest in Europe – the Conservative Party in power was liked by only 41% of the public. 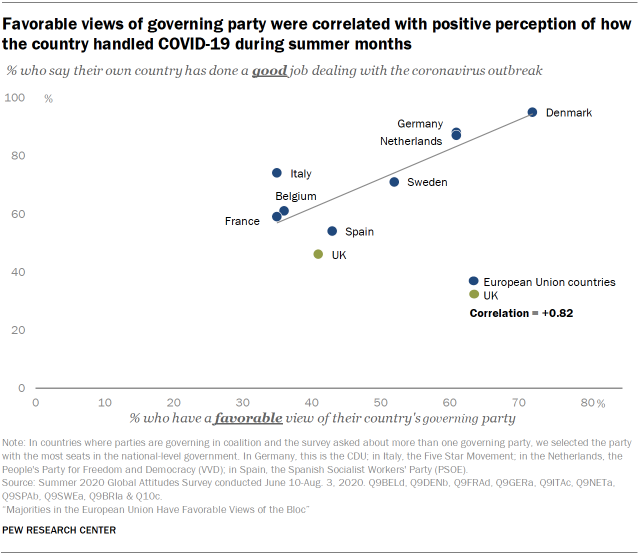 More broadly, favorability of many political parties was colored by perceptions of how well the country had handled COVID-19. In almost every country surveyed, the gap was largest when it came to evaluations of the governing party. For example, in Germany, people who said the country had dealt well with the outbreak were 50 percentage points more likely to have a favorable view of the governing CDU than people who said it had done poorly. And in Spain, 64% of those who thought the country had done a good job dealing with the pandemic saw the Spanish Socialist Workers’ Party – the party currently in charge – favorably, compared with 20% of those who said the country had done a bad job. Two populist parties that are part of the governing coalitions in their country – the left-wing Podemos in Spain and the centrist Five Star Movement in Italy – also were seen more positively by those who thought the country did well.

In some instances, opposition parties were also seen more positively by people who applauded their country’s handling of COVID-19. In France, for example, people who thought the country had dealt well with the pandemic were also more likely to have favorable views of the Republicans and the Socialist Party, not just En Marche. But, in some countries, including Spain and the UK – two countries in Europe where opinions about pandemic handling were among the most divided by partisanship – the opposite was true. For example, in the UK, those who thought the UK had done well dealing with the pandemic were less likely to have a favorable view of the opposition Labour Party, and in Spain, the same was true when it came to the out-of-government People’s Party. 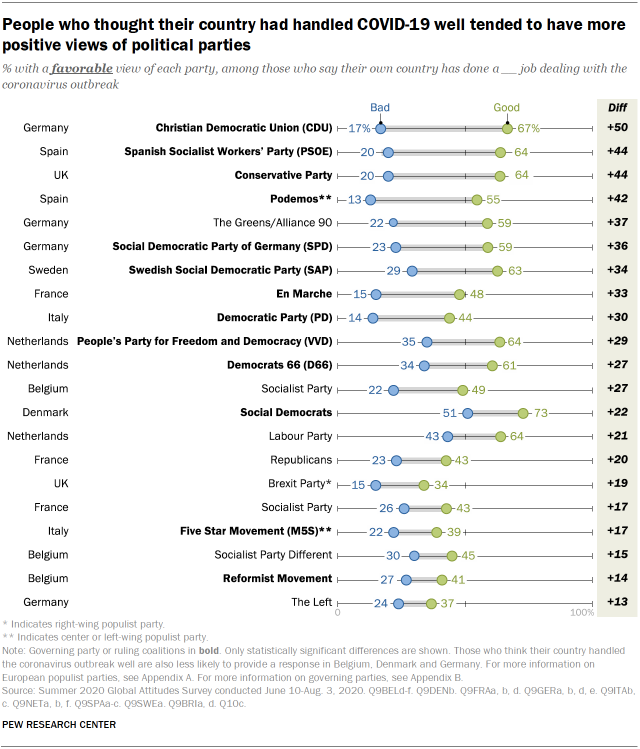 People who thought their country had done well handling the pandemic were less likely to have a favorable view of right-wing populist parties. The gap was largest when it came to the Swedish Democrats, though in the Netherlands (PVV), Germany (AfD) and Spain (Vox) the gap was 20 percentage points or more. 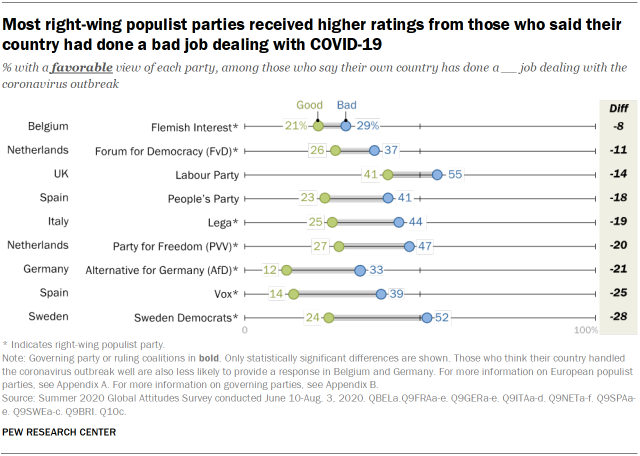 Next: 5. Attitudes toward the EU and European leaders from outside the region
← Prev Page
Page1Page2Page3Page4You are reading page5Page6Page7Page8Page9Page10
Next Page →

Majorities in the European Union Have Favorable Views of the Bloc 1. Member nations had broadly favorable views of the EU 2. Before the fall resurgence, most Europeans approved of EU’s COVID-19 response 3. Many in Europe were confident in Merkel and Macron over the summer; Johnson received mixed ratings
4. Views of many European political parties improved against backdrop of COVID-19
Favorable views of many parties have increased since last yearOpinions about how well each country handled COVID-19 colored views of most parties
5. Attitudes toward the EU and European leaders from outside the region Appendix A: Classifying European political parties Appendix B: Political categorization Acknowledgments Methodology