A majority of Western Europeans in the eight countries surveyed say membership in the European Union has been a good thing for their nation’s economy. Despite these views, majorities say some EU powers should be returned to national governments.

Those on the left tend to be relatively more pro-EU than those on the right.9 People with populist views have less positive attitudes about the institution’s economic benefits, and more of a desire for some EU powers to be returned. 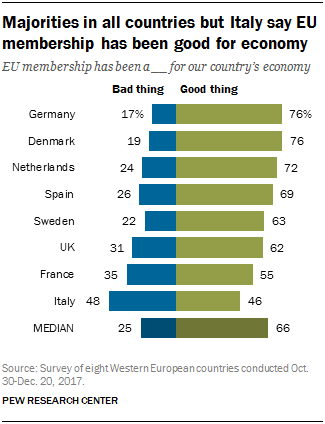 Majorities in every country but Italy say EU membership has benefited their country economically. This sentiment is most widespread in Denmark, Germany, the Netherlands and Spain, where about seven-in-ten or more see EU membership as a good thing.

In every country surveyed, people who hold populist views are less likely than those in the mainstream to say EU membership has positively impacted their nation’s economy. In half of the countries, Left Populists and Right Populists feel similarly about the institution – despite significant differences among their countries’ Left and Right Mainstream. For example, in the Netherlands, just 52% of Right Populists say the EU has been good for their economy, as do 55% of Left Populists and 59% of Center Populists. Among the mainstream in the Netherlands, much larger majorities see EU membership as an economic positive: 86% of the Left Mainstream, 81% of the Center Mainstream and 75% of the Right Mainstream say EU membership has benefited their national economy. 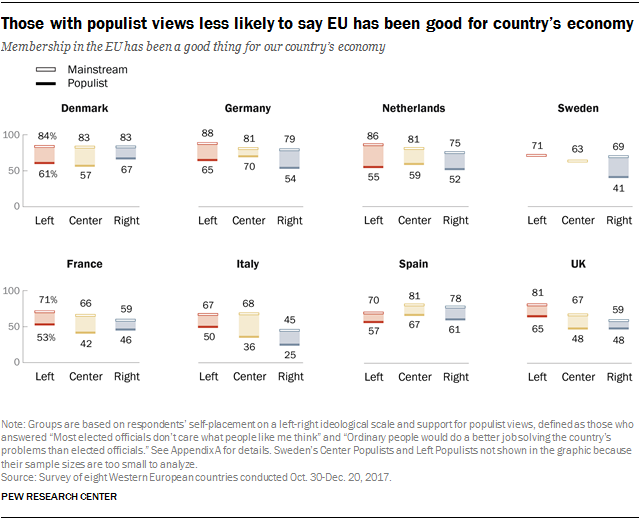 Most want some EU powers returned to national governments 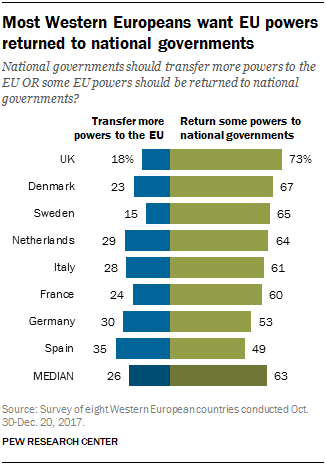 Despite widespread belief in most countries that the EU has benefited national economies, roughly half or more in all countries surveyed say they want some EU powers returned to national governments. Even in Denmark and the Netherlands – countries where broad majorities see economic benefits from the institution – roughly two-thirds say some EU powers should be returned.

The desire for returning EU powers to individual countries is most widespread in the UK, where the national government is currently negotiating an exit from the EU. Nearly three-quarters of Brits (73%) say they want to see some powers returned. Germans and Spaniards are the least likely to favor this type of change (53% and 49%, respectively).

People who hold populist views are more likely than those in the mainstream to want more national sovereignty in seven of the eight countries surveyed. For example, in France, 68% of Left Populists support EU powers being returned to national governments, compared with 54% of the Left Mainstream; on the right, 76% of Right Populists say the same, versus 61% of the Right Mainstream. The one exception to this pattern is the UK, where populists and mainstream respondents largely agree on this issue. 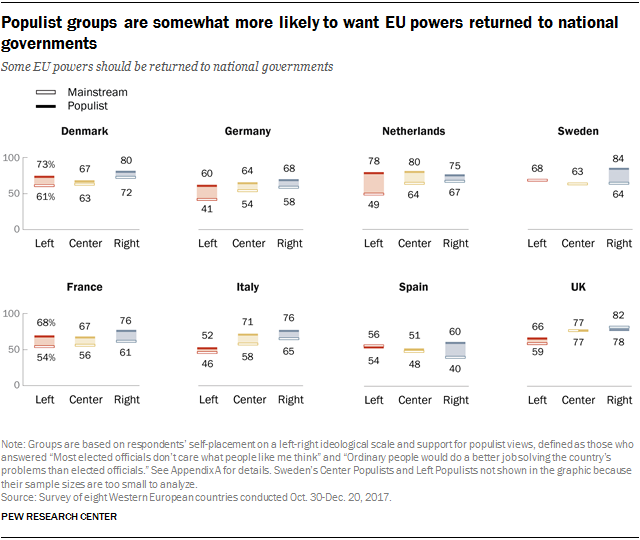