British Prime Minister Theresa May has called a “snap” election for June 8, the first general election since the June 2016 referendum in which the public narrowly voted in favor of a British exit, or Brexit, from the European Union. A new Pew Research Center survey finds that the British public is divided over the impact Brexit will have on their country. 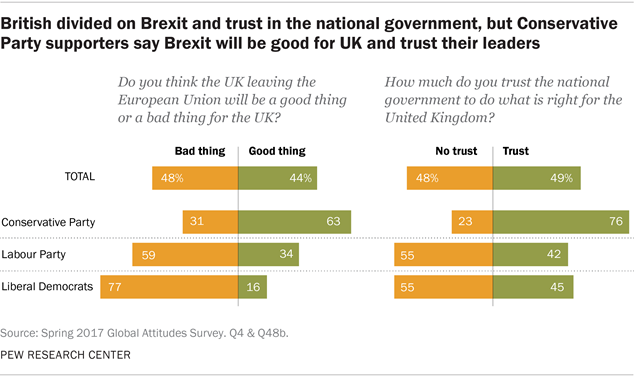 Nearly half (48%) say Brexit will be bad for the UK, compared with almost as many (44%) who say the decision to leave the EU will benefit their nation. Similar to the June referendum, optimistic attitudes toward Brexit are most frequently expressed by people who are 50 or older, have a secondary education or less, and are partial to political parties on the right, including the Conservative (Tory) Party and the United Kingdom Independence Party (UKIP).

Political observers have suggested that Prime Minister May called early elections in order to increase the number of Conservative Party seats in Parliament, thus strengthening her ability to negotiate with the EU over Brexit terms. Currently the British government receives mixed reviews from average citizens: 49% of Brits say they can trust the national government somewhat or a lot, and 48% say they have little or no confidence in the government to do the right thing for the UK.

On both the impact of Brexit and trust in government, British opinion divides along party lines. Supporters of May’s Conservative Party are more optimistic about the UK’s post-Brexit future than backers of either Labour or the Liberal Democrats. Those with a favorable opinion of the UKIP, which realized its long-standing dream of the UK’s separation from the EU, are especially likely to say that Brexit will be good for the country. 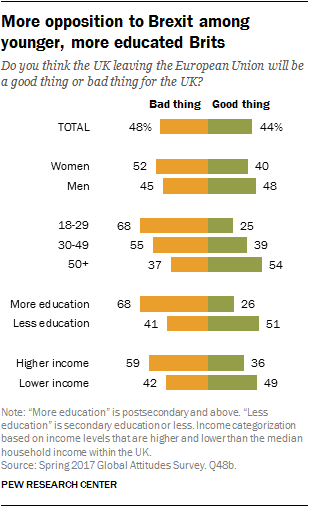 The contours of optimism and pessimism regarding Brexit’s impact on the UK closely reflect the vote itself, with sharp divides by age and education.

Men are somewhat more convinced than women that Brexit will be a good thing. But an even larger generational divide exists, with only one-quarter of Brits ages 18 to 29 convinced Brexit will be good for their country, compared with 54% who say this among people 50 and older.

Those with less than a postsecondary education and people with lower incomes are much more likely to say that Brexit will be a good thing for Britain, compared with those who have more education and higher incomes.

And despite a dramatic difference in how the English and Scottish voted in the June 2016 referendum, today Scots are just as likely as those who live in England to say that Brexit will be a good thing for the UK (44%).

People who back the Conservative Party are much more optimistic about their country’s post-Brexit future than supporters of the Labour or Liberal Democratic parties, who are on the left of the political spectrum. More than six-in-ten Conservative backers (63%) think that leaving the EU will be good for the UK, while only around a third (34%) of Labour supporters and a scant 16% of Liberal Democrats agree.

Brits split on trust in the national government 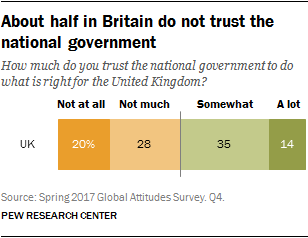 About three-quarters of Conservative Party supporters (76%) say they trust the national government at least somewhat, compared with 45% of Liberal Democrat backers and 42% of Labour supporters.

Confidence in government is also slightly higher among people with more education, compared to people with less education (53% vs. 46%). 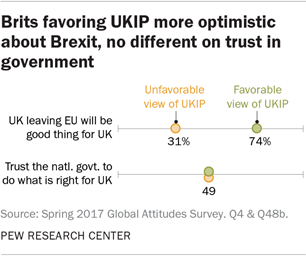 The most optimistic expectations for a post-Brexit future are expressed by those with a favorable opinion of the UKIP. About three-quarters (74%) of this group say Brexit will be good for the UK.

People with a favorable view of UKIP, however, are no more likely than UKIP critics to express confidence in the current national government (49% each).