Most Western Europeans think immigrants strengthen their national economies. However, publics are more split on whether immigrants increase the risk of terrorism in their countries and overwhelmingly say it is best if immigrants adopt the customs and traditions of the country to which they’ve moved.

People’s left-right ideological positions shape their attitudes about immigration more than whether they hold populist views.7 Those on the left are significantly more positive than the groups on the right about immigration’s impact on their country. Still, people with populist views are consistently more likely than their mainstream ideological counterparts to think immigrants have a negative impact on jobs and domestic security, with Right Populists often being the most concerned about the effects of immigration. 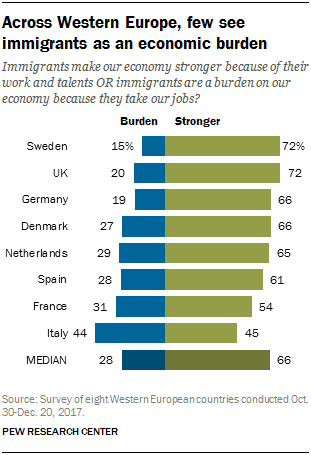 Half or more adults in seven of the eight Western European countries surveyed say immigrants make their country’s economy stronger because of their work and talents. This feeling is most widespread in both Sweden and the UK (72%). About three-in-ten or fewer in seven of the eight countries believe immigrants are a burden on their economy because they take the country’s jobs.

Only in Italy is the public divided; nearly equal shares say immigrants make the economy stronger (45%) as say they are a burden (44%).

In nearly all countries surveyed, the differences between those who hold populist views and those in the mainstream are also significant, with those espousing populist views tending to be more negative about the impact of immigration on their national economies. In Germany, for example, Right Populists (47%) are significantly more likely than their mainstream counterparts (20%) to see immigrants as a burden. German Left Populists are also more likely than the Left Mainstream (23% vs. 5%) to share this view, as are Center Populists compared with the Center Mainstream (29% vs. 15%).

In most countries, Right Populists are the most likely of all groups to see immigrants as a drain on the economy. 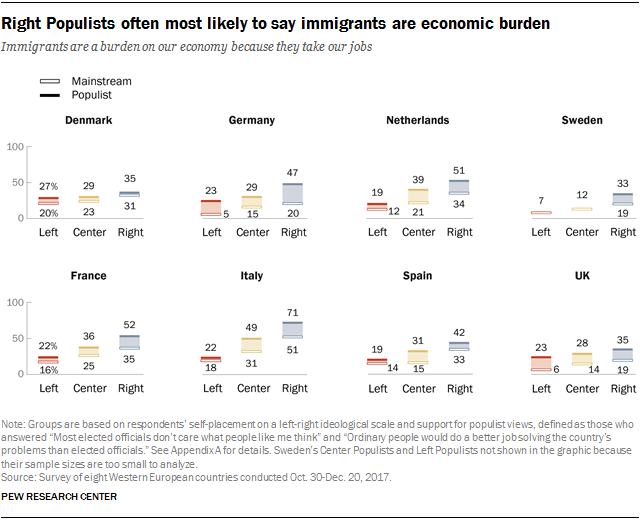 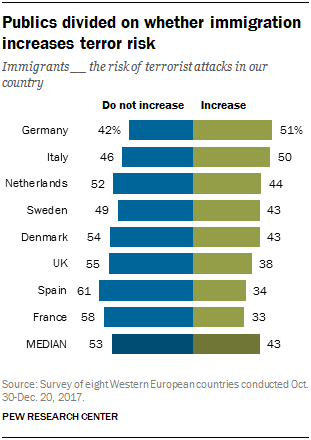 While a majority of people across Western Europe think immigration strengthens their economies, publics are split on whether immigration increases the risk of terrorist attacks in their countries.

But half or more in five countries – the Netherlands, Denmark, the UK, Spain and France – say immigrants do not increase the risk of terrorist attacks in their country.

Left-right ideology tends to influence people’s attitudes about immigration’s impact on security more than populist views. In every country, people on the right are more likely than those on the left to think immigrants increase the risk of terrorism in their countries. Differences between those on the left and those on the right in each country range from 24 to 31 percentage points. For example, 58% of Germans in the Right Mainstream say immigrants are a security risk, compared with just 28% of Germans in the Left Mainstream.

Still, in most countries, populist groups are more negative toward immigrants on the issue of security than their mainstream counterparts. For example, 32% of British Left Populists think immigrants increase the risk of terrorism, compared with just 17% of the Left Mainstream. 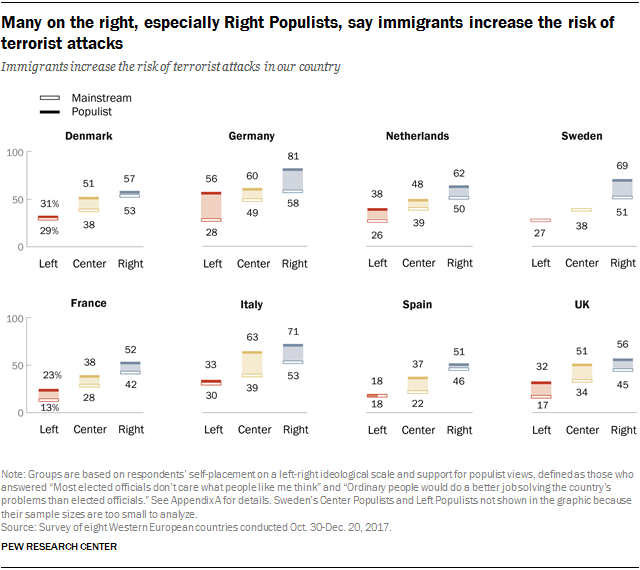 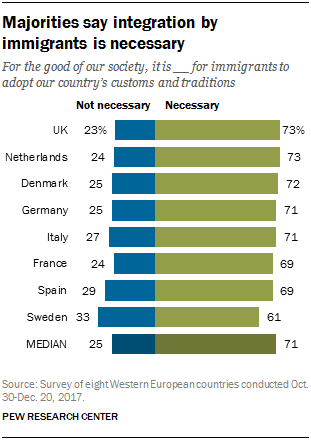 Roughly seven-in-ten in most Western European countries think it is necessary for the good of society that immigrants adopt the customs and traditions of their new country. Fewer Swedes say integration is essential, though a majority (61%) still endorses it.

As with views on immigrants’ impact on the economy and terrorism, left-right ideology tends to shape peoples’ views on integration more than populist views. In all countries, those on the right are much more likely than those on the left to say it’s necessary for immigrants to adopt the customs and traditions of their new country. For instance, 81% of Dutch people in the Right Mainstream say integration is necessary, compared with 56% of Left Mainstream.

Still, in Germany, the Netherlands and Sweden, populist attitudes also color people’s views of immigrant integration, with those who hold populist views being more likely to believe immigrants need to integrate than their mainstream counterparts. For example, in Germany, 82% of Left Populists say immigrants must adopt German customs and traditions, versus 51% of the Left Mainstream. 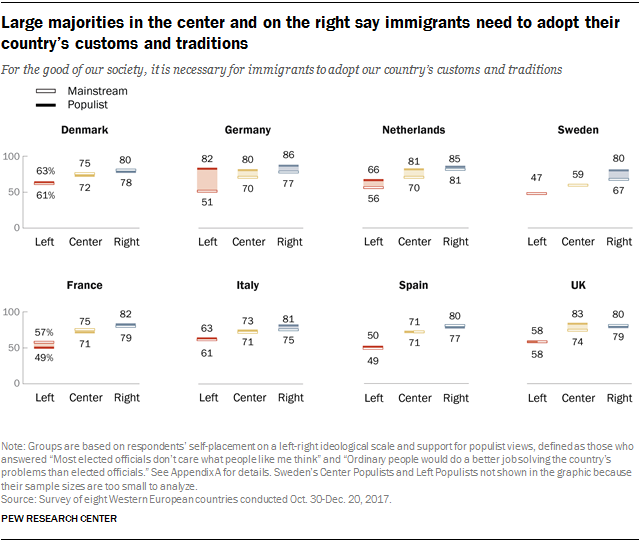 Next: 5. Populist groups across the ideological spectrum have low trust in institutions
← Prev Page
Page3Page4You are reading page5Page6Page7Page8Page9Page10Page11Page12Page13
Next Page →