In all countries surveyed, people who espouse populist views have significantly less trust in key institutions than those in the mainstream. These populist-mainstream differences in trust are especially pronounced when it comes to views of the national parliament, and they overshadow the gap between those on the ideological left and right.8

Trust in most institutions is low in France, Italy, Spain and the UK

The military is the most trusted of the four institutions asked about in Western Europe (the military, the news media, financial institutions and the national parliament). In all eight countries, at least two-thirds say they trust the military, ranging from a low of 66% in Spain to a high of 84% in France.

Trust is generally lower for the other three institutions. Across all eight countries, no more than about seven-in-ten say they trust the national parliament, banks or the news media. And in three of the countries surveyed – France, Italy and Spain – fewer than four-in-ten say this. In these three countries, the national parliament is particularly poorly rated; only 33% of the French and 16% of both Italians and Spaniards say they trust the institution. These three countries also rate the news media and financial institutions much lower than the other countries surveyed.

Similarly, in the United Kingdom, few trust the national parliament or the news media. Roughly a third trust either of these institutions, though a higher percentage (54%) views banks in a positive light. 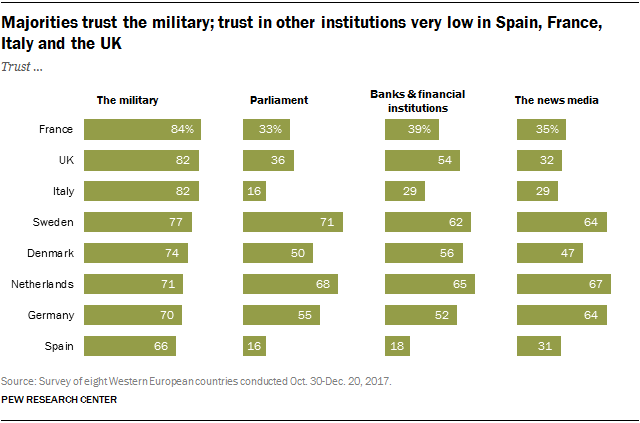 Populist groups across the ideological spectrum trust the national parliament, news media less than those in the mainstream

In general, populists express lower levels of trust in institutions than those in the mainstream. This is true for all four institutions asked about – the national parliament, the news media, banks and financial institutions, and even the military. 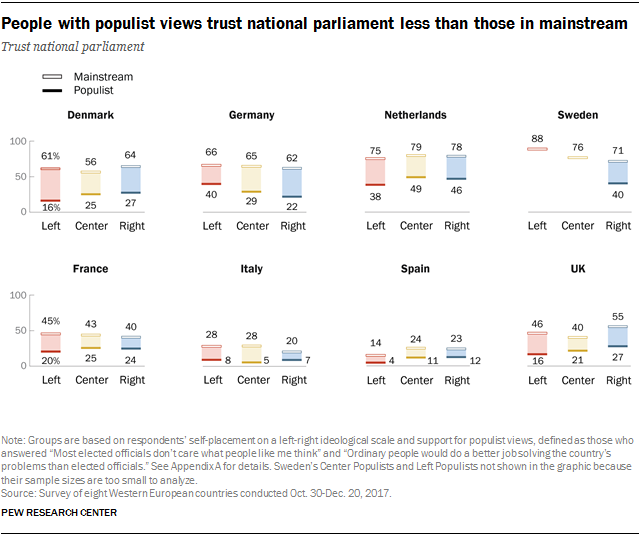 Differences between people with populist views and the mainstream are most pronounced when it comes to trust in the national parliament. In five of the eight countries, Left Populists and Right Populists are at least 25 percentage points less likely to trust the national parliament than the Left Mainstream or Right Mainstream, respectively. For example, in Denmark, 16% of Left Populists trust the institution, compared with 61% of the Left Mainstream; similarly, 27% of Right Populists trust parliament, compared with 64% of the Right Mainstream. In no country do more than half of any of the three populist groups say they trust parliament – though it ranges from a low of 4% among Left Populists in Spain to a high of 49% among Center Populists in the Netherlands.

Populists on the left and the right also trust the news media less than those in the mainstream. For example, in Germany, a majority of the Left Mainstream (74%), Center Mainstream (71%) and Right Mainstream (65%) all trust the news media; in contrast, half or fewer of Left (44%), Center (50%) and Right Populists (38%) feel the same. Gaps in trust in the media between those with populist views and the mainstream tend to be significantly larger and more consistent than those between the ideological left and right. (For more on Western European attitudes about the news media, see “In Western Europe, Public Attitudes Toward News Media More Divided by Populist Views Than Left-Right Ideology.”)

In six of the eight countries surveyed, people on the ideological right trust financial institutions more than those on the left (the notable exceptions being Germany and Italy). For example, 64% of the Right Mainstream in the UK trust banks, compared with 50% of the Left Mainstream. As with other institutions, people with populist views tend to express lower levels of trust in banks than those in the mainstream. Looking again at the UK, 64% of the Right Mainstream trust banks, compared with 51% of British Right Populists.

Still, Left Populists stand out for their low levels of trust in financial institutions. For example, in the UK, only about a third (32%) of Left Populists trust banks, compared with half or more in all other groups. Trust is particularly low among Left Populists in Spain, where only 8% trust banks. 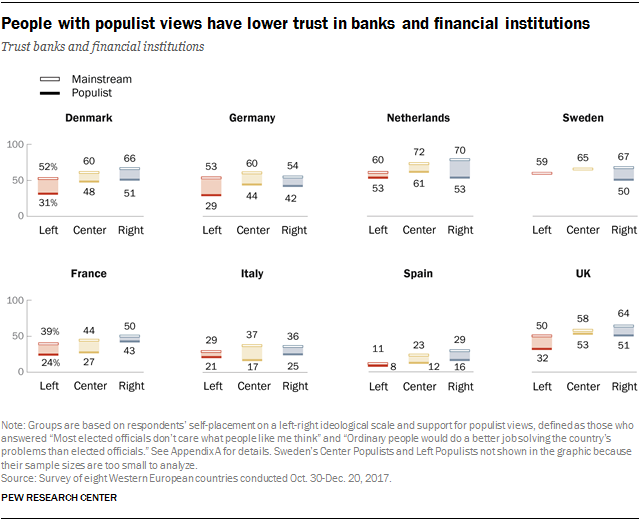